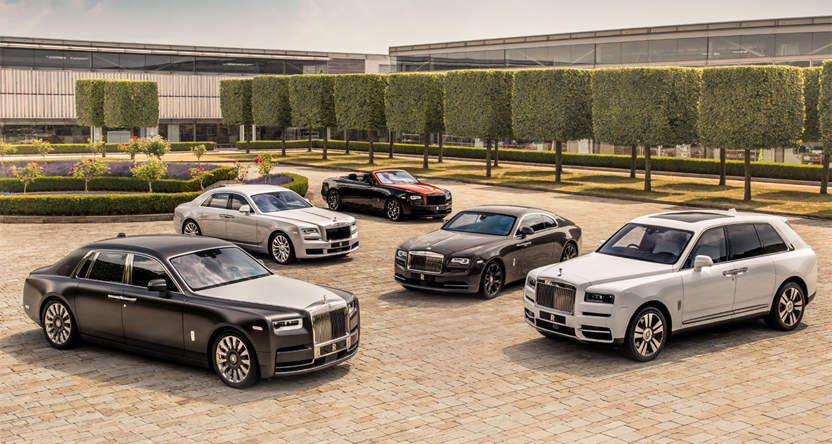 Bespoke design, expert craftsmanship and handmade all the way: welcome to the house of Rolls-Royce.

Rolls-Royce needs little introduction. The story could begin in 1904 when Charles Rolls met Henry Royce, but that history is well documented. It could open with the legacy of a brand that extends beyond horsepower, to jet engines, design and superlatives, but that would unearth nothing new. Instead, we begin at a place reserved only for the lucky few: a sweeping driveway bordered by trees and tranquil lakes; a portal that leads straight to the doors of one of the most famous car manufacturers in the world.

On arrival at the headquarters in Goodwood, England, quizzical expressions are commonplace amongst first-time visitors to RollsRoyce, as is the question: “Where is the plant?” They can be forgiven. With the largest “living roof ” in Europe and an expanse of green, open space complete with beehives and rare birds, it doesn’t look much like the home of an automotive company. And that’s because in many ways, it isn’t.

Make no mistake, this is where life begins for every motor car that bears the iconic RR logo and Spirit of Ecstasy statuette, but as personnel from designers to executives are keen to stress, Rolls-Royce is first and foremost a purveyor of handcrafted luxury goods—and it just so happens to make some of the most exceptional cars on Earth.

From the Sweptail, a one-off coach-built motor car, reportedly the most expensive car ever commissioned, to the Phantom and Ghost series, ever popular with royalty, celebrities and business tycoons, Rolls-Royce has long known how to do luxury on wheels. There have been recent additions too: the Dawn, a four-seat convertible, and the Cullinan SUV, both of which are proving popular with younger, yet equally affluent, clientele.

Are there comparable cars in existence? “No,” says Richard Carter, Director of Global Communications at the firm. From a boardroom overlooking open grounds, he politely suggests that that is, in fact, the wrong question. “People often ask who our competitors are, expecting us to say the likes of Bentley, but that’s simply not true.” As he points out, their customers don’t worry about whether to buy a Rolls-Royce, a Bentley or a Ferrari—they might buy all three. What they will do, says the South African, is ponder whether they want to own a million-dollar car, or whether their cash would be better spent on a painting, wristwatch or beautiful piece of jewelry.

For those who choose Rolls over Rembrandt, their journey often begins with a chauffeur-driven pick up from Southampton’s private jet terminal. From there, they are transported to the company’s headquarters, located just outside the quintessential English town of Chichester. Their visit is not a PR stunt or a gesture of goodwill from Rolls-Royce, it is the first step in the creation of something truly unique. Yes, customers have off-the-peg options to choose from, but where’s the fun in that when you can design your own?

Once onsite, customers are whisked into a sunlit reception room decorated with memorabilia, from founders’ portraits to acoustic guitars. From there, a doorway leads into a side room lined with example color combinations and indulgent accessories. There is an array of design gadgets too, including a rotating lampshade that demonstrates how different paint colors might look in different parts of the world.

It is in that very room that prospective buyers have their first encounter with Gavin Hartley, Head of Bespoke Design. Starting with a sketch book and pencil, he and his team are responsible for helping customers realize their four-wheeled dreams. The design process can be long—months or even years—but Rolls-Royce is in no rush. “Who are we to say someone should have a time limit on their decision making?” says Hartley, “They are investing their time in the project as well, so they’re not out to waste it.”

One estimate suggests it takes 60 pairs of hands an average of 450 hours to design, construct and craft each Rolls-Royce, but when every car is different, it’s impossible to say for sure. What the team can say with certainty is that it’s worth the wait. “The final reveal is a building up of the pleasure of the experience,” explains Hartley, “There shouldn’t be any ‘oh dear, I didn’t think it was going to look like that’ moments.”

The remark is lighthearted, but still true. The RollsRoyce designers will sit with customers as many times as they wish in order to achieve each owner’s idea of perfection—and from color to upholstery, there are few wishes that go ungranted, no matter how outlandish they may seem. In fact, the head of bespoke design rejects the suggestion that some requests might be a step too far. “If we say that Rolls-Royce is bespoke, then it has to be,” he says. The only requests that get turned down are those that render the car unsafe or unroadworthy, or that the team feels it can’t execute to Rolls-Royce standards. Quoting a former colleague, Hartley adds that “RollsRoyce is the custodian of quality, not the custodian of taste.”

Often, customers sit back and allow the design team to steer the process. Other times, people know exactly what they want. Billionaire energy and hotel magnate, Sir Michael Kadoorie—a man who Hartley describes as a “Rolls-Royce expert”—is one such client, as is fellow billionaire businessman, Michael Fux. Such is Fux’s passion for Rolls-Royce, he owns several cars, as well as the rights to the specially commissioned colors they’re painted with.

Fux is not alone. For some, Rolls-Royce’s current collection of 44,000-plus colors simply isn’t extensive enough, so they opt to create their own. One customer wanted a car to match her Red Setter dog, another wanted to recreate the exact shade of her favorite nail polish. In another case, an American client happened to be driving past a shop window in California when a brightly colored dress caught his eye. Stopping the car, he proceeded to purchase the garment and ship it to Rolls-Royce where the paint team worked their magic.

And the wish lists don’t end with color. One customer drove off with a bespoke perfume capsule complete with certificate confirming it would remain the only one of its kind in the world. Another client had the car’s wooden interior crafted out of a tree from his own back garden. Rolls-Royce’s starlight roof liner has proven a hit too. “Our basic idea was to have twinkling stars in the ceiling, but then the requests started: customers want their birth sign, they want the two RRs, they want the sky over Dallas Texas on the night they were born—and we’ve just introduced shooting stars,” says Carter.

For Middle Eastern customers, the Dallas sky is unlikely to appeal, but attention to detail is key, whether it be complex embroidery, handknotted silk rugs or inlay made from precious metals or Mother of Pearl. Then there is the question of color. “They are quite adventurous color-wise. Some of the choices would look unusual in the leafy green suburbs of [England’s] South Downs, but when you see that car driving around in Abu Dhabi or Kuwait City, it fits,” Carter explains. One of those two cities could well be where a recent order for 13 cars—each a different color—has wound up.

Whatever the request and whoever the client, when money is no object, exclusivity and unbridled customization hold great appeal. No longer is personalization an add-on. At Rolls-Royce and other luxury maisons, people don’t just want a final product, they want an experience.

Luxury experts agree. According to Boston Consulting Group, appetite for experiential luxury is on the rise. “By 2022, the experiential segment is forecast to account for nearly two-thirds of the total luxury market, representing a fundamental shift in consumer behavior, from owning to being,” says the consulting firm. At Rolls-Royce, customers crave both, whatever the cost.

“Customers fly in, sit with our designers, and at the end of the day, we shake hands. Sometimes we have no idea how much the car is going to cost at that stage,” explains Carter. “$700,000, it could be $1 million. What we do know is they’ve had a great experience,” he continues, pointing out that clients often wear wristwatches more expensive than the car they’re about to buy.

Experience and exclusivity matter to Rolls-Royce as much as they matter to the customer, and they are reflected in a business model that flies in the face of convention. At Goodwood, every car is still made by hand, automation is kept to a minimum and, given more capacity, they would hire more people, not produce more vehicles. Rolls-Royce Motors custom-built 4,107 vehicles last year and that number suits them fine.

“We don’t want to sell more and more cars,” asserts Carter. For an automotive manufacturer such a statement would be absurd, but not for a high-end luxury goods company. At Rolls-Royce, rarity is key to retaining the exclusivity of the brand, and it allows them to choose man over machine every time. With the exception of the paint shop, there’s not a single robot on the factory floor. There isn’t even a conveyor belt—the line is still hand pushed. From the wood and leather work to the assembly of every vehicle part, Rolls-Royce’s 2,000 employees work painstakingly by hand to craft cars to a standard as close to perfection as they can get.

Yes, the process soaks up copious amounts of time and hands-on graft, but at Rolls-Royce, both are luxuries they can afford—and the customers who cruise up the tree-lined driveway ready to turn their dreama to automotive reality wouldn’t have it any other way.