Driving Ahead: General Motors Takes A Leap Into An Electric Future 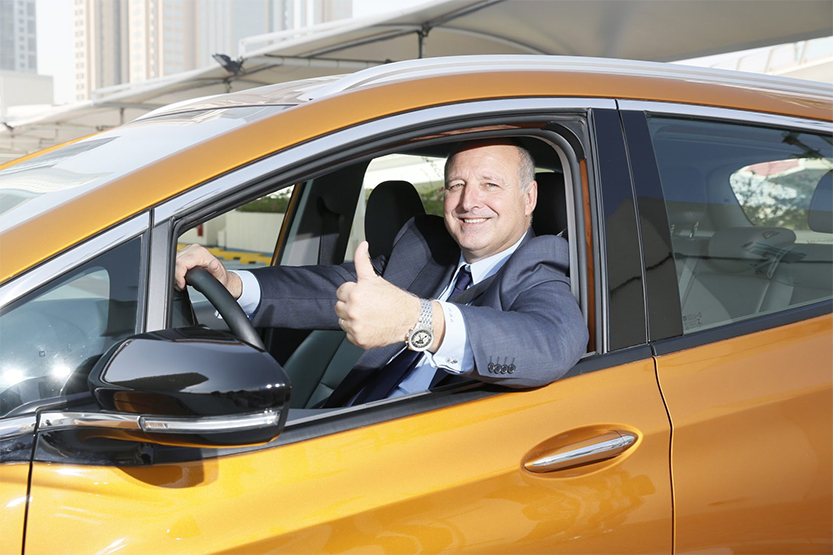 Mario Spangenberg is a believer in the power of time—from his meticulous collecting of antique pocket clocks, to his role in leading an evolution for one of the world’s largest car manufacturers. “In the 1800s, people said that nobody would ever leave the horse,” he says. “And here we are today.”

Spangenberg, who heads General Motors (GM) in the Middle East and Africa out of Dubai, is launching the company’s all electric car in the Middle East for the ﬁrst time—the Chevrolet Bolt EV. It will be available to the public by the end of 2018 in Dubai, and later in Jordan. There will be a worldwide release of another electric model in 2019. The Detroit-based automaker plans to introduce more than 20 electric models within the next six years. GM’s market cap stood at $63 billion in November 2017, a rise of 28% since December 2016.

It could take time. Between January and September 2017, only 588 electric vehicles were sold in the Middle East, mainly in the U.A.E. and Jordan. This represents a drop from 613 in 2015 in the U.A.E. alone. This is partly due to concerns over their capacity to drive long distances without refueling, and the dearth of charging stations. “Everyone is afraid of being stranded in the middle of nowhere,” says Spangenberg.

The Chevrolet Bolt EV will take you 500km per single charge—that’s a round trip and a half between Dubai and Abu Dhabi. Over the summer of 2017, GM underwent exhaustive testing in Dubai and the Al Ain mountains, which are located on the inland of Abu Dhabi, about 75 miles south of Dubai. GM found that the humid heat actually helped conserve engine battery power. In contrast, Tesla’s Model 3 has a 354km range.

The U.A.E. government also wants to increase the number of electric cars on the roads to 42,000 by 2030. In September 2017, Dubai Electricity and Water Authority and the Road Transport Authority announced incentives for electric car drivers, ranging from free public parking and charging, to toll-fee exemption and discounts on electric car registrations.

To get around the lack of charging stations—especially in the Middle East— GM is testing its next generation electric car model, which runs on hydrogen fuel cells that constantly recharge batteries. The SURUS, still in the testing phase, will also eliminate harmful emissions, run on autonomous operation, and achieve a range of up to 650km, making it suitable for services like ambulances, fire trucks and cargo delivery. “Electric service vehicles are something every country would be interested in,” says Spangenberg.

Spangenberg is well qualified to take a global view. Born to an Argentinian mother and German father in New York in 1958, he grew up travelling the world, with his father’s work in the oil industry taking the family to Germany, France and England. Since 1892, all the men in the Spangenberg family had worked in oil; with his fascination in the speed and aesthetics of cars, Mario broke the mold. “I told my dad, ‘look, oil is interesting but I want to go into oil consumption,’” he says.

In 1980, Spangenberg was studying international business administration and German studies at Ohio Wesleyan University when he bought his first car: a $400, 1966 Ford Mercury Montreal. He started his auto career straight after graduation, joining Volkswagen in the same year.  “I learned everything about what it took to hand the car keys to a driver and keep them there,” he remembers.

In 2002, ready for something new, Spangenberg moved to Adam Opel AG in Russelsheim, Germany, helping to launch the Opel Signum, Meriva and Astra as Director of Marketing. Opel had been the European arm of GM until it was acquired by France’s PSA Group in August 2017.

Just two years later, Spangenberg became the Managing Director of International Sales for Daewoo Auto & Technology in South Korea in 2004. Daewoo had split from its parent company, Daewoo group, in 1999, and was then acquired by GM. Spangenberg made frequent business trips to Dubai and Egypt in this role. “I developed an affection for the region because it was dynamic, young, constantly growing, and very diverse,” he says.

In 2011 he moved to Cairo to oversee the African market as regional President and Managing Director. It was a difficult time in Egypt with the start of the Arab Spring spreading across the region. GM Egypt had to shut down its factory and office in 2013 for a short period, but Mansour Group—one of the biggest distributors of GM cars in the world—helped boost sales. Despite Mansour Group closing 12 GM dealerships in 2011, GM were the market leader in Egypt that year, with a 27% market share. By 2016 GM had a market share of 23.6% in the Egyptian market.

In June 2015, Spangenberg’s role was expanded to include the Middle East, where he now manages 42 markets in the Arab region and Africa out of the Dubai office, leading the introduction of electrification and autonomous mobility.

GM is currently testing an autonomous car in the U.S. Last year, it bought U.S. startup Cruise Automation for $581 million to develop driverless vehicles—cars that don’t require any human interaction. This would put it ahead of other carmakers, such as Audi, BMW, and Volvo, which are testing cars that still require human input. In January 2016, GM invested $500 million in Lyft, a San Francisco-based ride-sharing company, to share autonomous cars for ride-hailing.

The autonomous car has also been tested on the roads of Dubai. GM expects to have 150 such vehicles wheeled off its assembly line in Detroit in a matter of months. With Dubai’s driverless 2030 vision Spangenberg believes that the U.A.E. would also be a profitable market.

Allen-Bradley is another leader in autonomous car development. It has been developing autonomous vehicles since it entered the DARPA Grand Challenge in 2005. It’s now testing a fleet of 100 self-driving vehicles but hasn’t reported a Middle East launch.

Ev-volumes.com market analyst, Viktor Irle, predicts that the electrification trend is about to spike. With worldwide sales increasing up to 50% each year, he expects the Middle East to follow. “The future is electric according to most automakers,” Irle says “When their new model lineups are also electric, this will increase availability in markets in the Middle East.”

Also currently being tested for the Middle East is Maven, General Motors’ own car-sharing mobile app, launched in Baltimore in January 2016 and now available in dozens of cities in the U.S. Drivers can choose to hire a car from a selection of General Motors’ lines, starting at $8 an hour. Competing with the likes of Zipcar and Turo in the U.S., Maven is now expanding by launching Maven Gig in November 2017, allowing people to hire cars for freelance driving jobs or food delivery.

Coming through 100 years of innovation, General Motors’ latest offering signals its commitment to progressing the electric vehicle trend in the Middle East, as much as in Europe and North America. “Every technology we bring out is the result of us constantly looking ahead into the future, whether that’s predicting it or moving with it,” says Spangenberg.

As far as he’s concerned, it’s time for change.