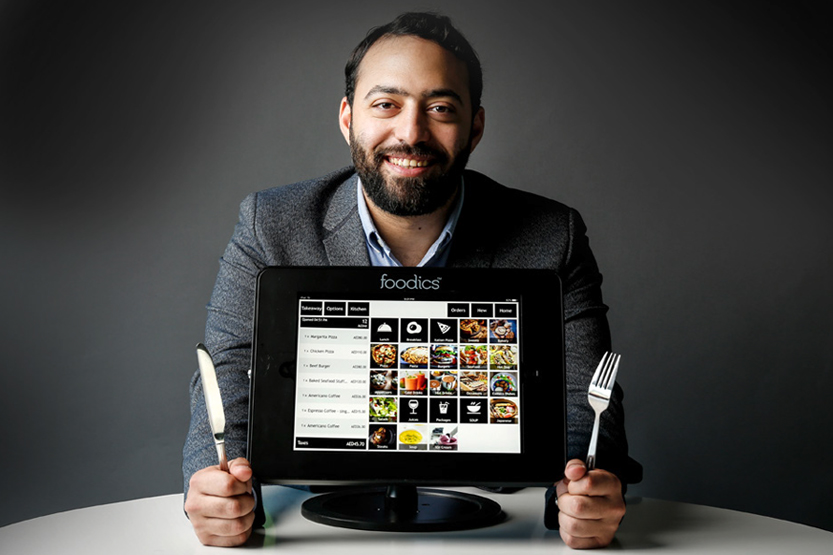 In-between classes, college friends Ahmad Alzaini and Mosab Al Othmani often met at coffee shops around Dhahran, Saudi Arabia to discuss ideas for a startup. “So much of who we were then and our growing friendship revolved around food,” says Alzaini. “When we talked about creating tech solutions for restaurants, we wanted the technology to help the relationship between a restaurant and its customers become stronger.” He and Al Othmani founded Foodics in 2014 in Khobar, Saudi Arabia. It offers a cloud-based restaurant payment system on an iPad in English and Arabic. But, it’s much more than a modern cash register.

Clients can choose from eight iOS app add-ons to manage and analyze a restaurant’s sales and inventory, organize employee schedules and predict customer behavior based on past orders. Alzaini, CEO, says they have contracts with nearly 1,000 restaurants, including fast-food chains Hamburgini and Burgerizzr in Saudi Arabia, and Holland House Mini Pancakes in Dubai. “Foodics processes more than five million transactions every minute,” says CTO, Al Othmani.

Having seen revenues reach $10.6 million in 2016, the startup has witnessed month-on-month growth of up to 24% this year, with another office in Dubai opening in February 2017. In September 2017, the cofounders raised $4 million in their first external funding round led by strategic investor Raed Ventures, the venture arm of Almajdouie Holding, a Saudi conglomerate with interests in food distribution, with Aryaf Bakeries and restaurants such as Café Liwan, a popular coffee shop chain. Saudi-based Riyad TAQNIA Fund and Naseel Holding, and San Francisco-based 500 Startups were also part of the round. Raed Ventures founding partner, Omar Almajdouie, began mentoring the two founders in December 2015 after meeting them through the BADIR Program for Technology Incubators in Riyadh, and helped prepare them for the funding round and their expansion into the U.A.E.

“The Foodics founders are tapping into a huge market that has welcomed their product. Their synergy as partners led us to believe in them and prepare them for a fast growth track,” explains Almajdouie. Alzaini and Al Othmani plan to use the funds to perfect their apps and to move headquarters early next year to Dubai, which represents a more lucrative market. “Dubai is more accessible for international business owners, which grows our client base and allows us to get into enterprise sales,” says Alzaini. One Jeddah-based breakfast joint, F6tor Faris, has used Foodics for almost three years. CEO Faris Al Turki says it helps him track sales at his three branches on an Apple device from any location. It also gave him insight into how much time kitchen staff spend preparing meals. “Pancakes were taking longer to make in some branches, so this probed us to investigate the reasons,” he says. Customers can also place orders and customize them by adding or taking away ingredients from a dish, all from an iPad. As a result, there’s less chance of hand-written mistakes, food waste and order delays. The order data is also recorded in intelligence reports for restaurant staff, helping them know the history of past orders. “We know what some of our customers are about to order the moment they walk in,” says Al Turki. Alzaini and Al Othmani, who are both 30, have certainly made good on their food and tech idea.

They met in 2008 at King Fahd University for Petroleum and Minerals in Dhahran, where Alzaini was studying electrical engineering and Al Othmani computer engineering. After graduating in 2012, they returned to their hometown of Khobar, where they teamed up to launch ALWANS, which created mobile apps for entrepreneurs, sometimes investing in the startups. Four are still running today: 3lml3b, which provides reservations for 34 private soccer fields across Saudi; Fixaat, a home maintenance services company; Sabooona, a soap and toiletries brand with 300,000 downloads; and Bouquet, a gift service. Alzaini scouted around for promising app ideas, and Al Othmani built the apps. To get clients, they placed an ad for ALWANS in 2013 in a Khobar newspaper, advertising prices as low as $100. A coffee shop owner called. He wanted a basic electronic menu app to enable customers to order from an iPad. Alzaini and Al Othmani delivered it in three months. The job sparked an idea: they could develop their own apps for managing restaurants. They started with building another menu app, but this time it would have additional customizable features for staff and patrons, such as managing changes to a dish, and be tailored to suit any restaurant model any size, not just a small coffee shop. “We had helped others reach tech fame so it made sense to do the same for ourselves,” says Alzaini. Simple, fast and cost effective, Alzaini and Al Othmani took their idea to the market. After only three months, they had seven paying clients, ranging from coffee shops to fast-food restaurants, and they were asking for more.

One app wasn’t enough to help the smooth running of a restaurant—restaurant owners were asking for an entire payment system that could be made-to-order. One that could be sold with built-in apps and powered with customizable features to meet every requirement of any restaurant, whether that be managing the stocks and inventory or increasing table turnaround time. The entrepreneurs decided to develop a full suite of iPad-based services for restaurants. Al Othmani spent a year developing the first version of their payment system, adding features such as calculating customer footfall to help organize staffing numbers and ultimately hike revenues, and allowing diners to track the status of their orders. Excited with their product and needing to boost the Foodics name quickly, Alzaini and Al Othmani first tried to intertwine their apps with already established global companies. They put together a business proposal and presented their technology to NCR, Omega and Micros— software and electronics companies with a collective 150 years of market experience, offering products including selfservice kiosks and point-of-sale terminals around the world.

They were met with less than enthusiastic responses. “We were shut down almost instantly by everyone we approached because we were so unknown and still had a lot to learn. We didn’t give up on the dream, we just started on it alone,” remembers Alzaini. Realizing they had more to learn about building a business in Saudi, they enrolled for the BADIR Program for Technology Incubators (BPTI) in Riyadh in September 2015. BPTI is part of the King Abdulaziz City for Science and Technology (KACST). It offered the right knowledge at a crucial time for the Foodics cofounders, including legal support, accounting services and free office space from which to work. “KACST is the right place for anyone with entrepreneurial stock. I know that Mosab and I will be back one day to give back and guide the next generation of innovators in Saudi,” says Alzaini.

One of the takeaway lessons for them was that to build on their success they had to focus on Foodics alone. The founders made the decision to devote AWANS entirely to Foodics, setting up a separate entity, BluLab, in December 2016— managed by Alzaini’s younger brother, Khalid—to maintain their early startup apps and investments. It was a strategy that paid off. By the end of 2016 Foodics was serving 34 clients in Saudi Arabia and now has a team of 50 Foodics employees in Riyadh, Jeddah, Khobar, and Dubai, spreading the technology to fast-food chains, sit-down venues and food kiosks. As they expand, the founders are well aware they have competition to deal with. Alzaini says his edge over bigger competitors in the Middle East, such as Expodine, System Middle East and HMH Establishment, is Foodics’ laser focus on restaurants.

Unlike Foodics, their competitors offer payment systems products that cater to clients in the food and beverage, hospitality and retail sectors. Now Alzaini and Al Othmani are looking at Barcelona and Istanbul for future ventures, as well as developing more apps, including one for restaurant loyalty programs, which most of their clients are offering. The cofounders are prepared for the challenges ahead—they have developed a coping technique of their own. “We always try to remember why we started all this, no matter what we are faced with,” confides Alzaini. “Building a relationship between restaurants and their customers; that’s how we’ll build our small business into an empire.”