The World's Most Powerful Women In Business 2018: Driving Change From The Corner Office 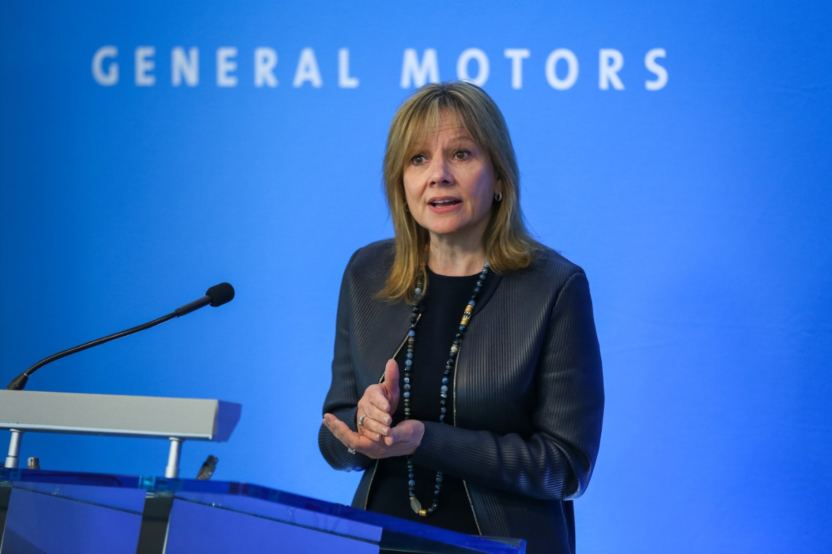 When Mary Barra joined the General Motors Co. in 1980, the Kettering University co-op student worked the factory floor, inspecting vehicles at the Pontiac Motor Division. Little did the 18-year-old know her time on the assembly line would be but the first of many stops along a decades-long journey at GM, one that would ultimately make history.

Thirty-four years later, Barra rose to the helm of GM, becoming the company’s first female CEO, not to mention the first woman to lead any major automaker. And she’s been driving GM forward ever since, investing billions in electric vehicles, self-driving cars and a ride-share service called Maven, all to ensure the manufacturer’s future. Her time at the top of the Detroit-based company, on track to generate $145.5 billion in revenue in 2018, has not been without turmoil: GM’s recent announcement of plans to lay off 14,000 North American workers, albeit in an attempt to increase resources allocated to engineering new technologies, has been met with outrage. Despite such news, though, Barra has once again earned herself a place on Forbes’ annual list of the World’s Most Powerful Women, claiming the No. 4 spot.

One of 27 businesswomen to make the 2018 ranks, up from just 19 in 2017, Barra is in good company, joined by several leaders whose efforts to steer their companies into the future have also landed them among the world’s most powerful. Just look at Isabelle Kocher, No. 15, who, since being named CEO of Engie, the largest non-state-owned electricity company in 2016, has doubled-down on solar and wind power, as well as electric vehicle production.

Many of the women who dot this year’s list are working toward ambitious renewable energy goals, like Lisa Davis, No. 37, Siemens Corporation USA CEO, who is responsible for overseeing more than half of the revenue generated by the $92 billion company and its new gas and power operating company. Across the Pacific in China, Dong Mingzhu, No. 39, chairman of Gree Electric Appliances, has strived to move her company—known for making 40% of the country’s air conditioning units—into alternative-energy vehicles, and Wang Feng Ying, No. 56, the CEO of Great Wall Motor, has made a deal with BMW to bring miniature electric vehicles to the nation. And then there’s Melanie Kreis, No. 61, CFO of Deutsche Post DHL Group, pushing the logistics company to experiment with autonomous delivery vehicles, Lynn J. Good, No. 72, CEO of Duke Energy Corp., championing resilient energy grids and more expansive natural gas infrastructure and Geisha Williams, No. 90, CEO of PG&E, meeting California’s 2020 renewable energy goals three years ahead of schedule. Appointed CEO in 2017, Williams is the first Latina to lead a Fortune 500 company.

Also at the helm of Fortune 500 companies are Marillyn Hewson, No. 9, CEO of Lockheed Martin, and Phebe Novakovic, No. 25, CEO of General Dynamics. Hewson’s pledge to lower the cost of military hardware and her commitment to closing the skills gap through apprenticeship programs have solidified her position in the power-women ranks, while Novakovic’s $9.7 billion acquisition of IT firm CSRA and 20% year-over-year revenue growthhave made her a fixture, too.

Other familiar faces include GlaxoSmithKline CEO Emma Walmsley, No. 18. After becoming the first woman to lead a major pharmaceutical company in 2017, Walmsley has cut 30 drug development programs and 130 brands from the GSK roster and established a collaboration with 23andMe, all in the name of lowering drug prices and developing better therapies. Fellow pharma executives Kiran Mazumdar-Shaw, No. 60, chair of Biocon and India’s richest self-made woman, and Judith Faulkner, No. 75, founder and CEO of medical record software provider Epic Systems, also returned to the list, while Gail Boudreaux, No. 12, made her debut. Since taking on the role of Anthem CEO in late 2017, she has completed the health insurer’s acquisitions of HealthSun, America’s 1st Choice and Aspire Health.

Boudreaux is one of five new names to grace the 2018 ranking, among them Tricia Griffith, No. 54. The CEO of the Progressive Corporation joined the insurance company as a claims representative in 1988 before climbing the corporate ladder to the role of CEO in 2016. In the past year, profits have more than doubled, propelling Progressive past Allstate to become the third-largest auto insurer in the U.S. Meanwhile, Alibaba CFO Maggie Wei Wu, No. 57, also new to the ranks and best known for leading the company through an IPO in 2017 (and privatization in 2012), was propelled onto the list following the ecommerce giant’s record-breaking 2018 fiscal year, as Booking.com CEO Gillian Tans, No. 43, earned her place after the travel site reached a landmark 5 million non-hotel listings in April. Bet365 founder and co-CEO Denise Coates, No. 81, whose gambling business facilitated $65 million in bets in fiscal year 2017, paid herself a whopping $279 million last year, making her the world’s highest-paid female CEO—and embroiling her in controversy.

Flanked by trailblazers—like Rosalind Brewer, No. 34, the first woman and African-American to hold the COO post at Starbucks, and Guler Sabanci, No. 64, the first female chair of Sabanci Holdings—and tycoons, including Gina Rinehart, No. 30, executive chair of Hancock Prospecting and Australia’s richest citizen, Thi Phuong Thao Nguyen, No. 44, cofounder and chair of Sovico Holdings and Vietnam’s first self-made woman billionaire and Lubna S. Olayan, No. 58, CEO of Olayan Financing and a member of the wealthiest family in the Middle East—these five newcomers have found themselves inducted into an impressive group of leaders. Raja Easa Al Gurg, No. 82, Easa Saleh Al Gurg Group managing director, Boo-Jin Lee, No. 86, Hotel Shilla CEO, Margarita Louis-Dreyfus, No. 99, Louis Dreyfus Holding B.V. chair, and Beth Brooke-Marciniak, No. 100, EY vice chair round out the list of 27 powerful businesswomen, all paving the way for more female executives to effect change from the elusive corner office.

Click Here for Full Coverage of the World's Most Powerful Women