These Billionaires Built Their Businesses Out Of Their Dorms 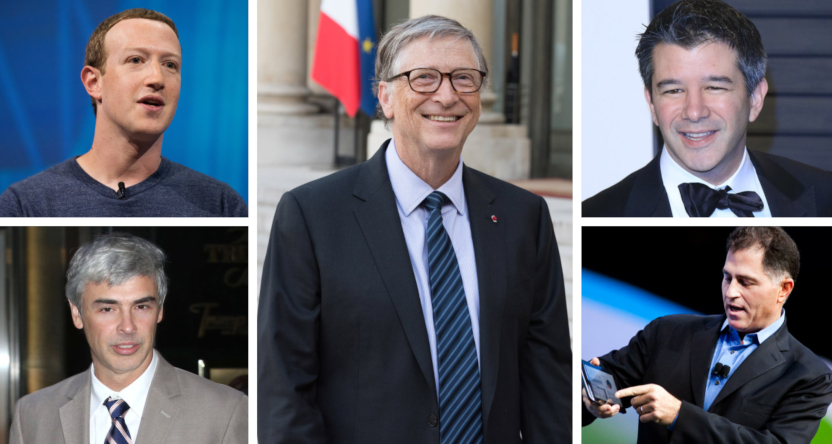 After hitting on a hot idea in their dorm rooms as students, these young geniuses dropped out of their studies to pursue their dreams as entrepreneurs. Today they are some of the world’s most recognized billionaires.

Gates came up with his idea for the world’s largest software business in the dorms of Harvard in 1973—the co-founder dropped out two years later. Childhood friends Paul Allen and Gates established Microsoft in 1975, with the latter as the CEO. Today he owns just under 1% of Microsoft shares, but has retained his role as a board member.

With his wife Melinda, Gates chairs the Bill & Melinda Gates Foundation. The world’s largest private charitable foundation, which works on making improvements in global healthcare, such as by collaborating with Rotary International to eliminate polio.

Although both Microsoft and Google were interested in acquiring his music-recommendation software pre-college, Zuckerberg chose to enroll at Harvard. Encouraged by his roommates, in 2004 he launched the first iteration of Facebook in his dorm room at age 19, which enabled Harvard students to match names with faces in class.

In his sophomore year, the young entrepreneur dropped out to fully pursue the social network venture. Facebook later became the biggest tech IPO in history and sold 1.6% shares to Microsoft for $240 million. The billionaire owns 15% of the stock today.

The two Google founders met at Stanford University while pursuing their PhDs. The duo’s common interests in the burgeoning internet, World Wide Web and data mining resulted in several published papers going viral, and the word of their revolutionary search technology spreading beyond Stanford walls. Dropping out from their advanced doctorate programs, they registered the domain name google.com in 1998 and the rest is history. Today Page is the CEO of Google parent Alphabet and Sergey Brin serves as the president.

Travis Kalanick
University of California, Los Angeles
Dropped Out: 1998
Net worth: $5.8 B Age: 42

In his childhood Kalanick used to sell knives in his neighborhood, and at 18 was selling tips about his SAT success score—1580 out of 1600—via teaching courses. The young entrepreneur dropped out of UCLA’s computer science program in 1999 to pursue a now-defunct search engine company that he built with five classmates.

Despite co-founding technology startups Scour and Red Swoosh, the billionaire is known for kick-starting the ride-hailing economy and revolutionizing the public transport industry with Uber in 2009. His 7% stake in Uber contributes to the majority of his fortune, however Kalanick stepped down from his CEO position in 2017 amidst investor pressure. Today he runs City Storage Systems, a holding company focused on redeveloping distressed real estate.

Dell learnt the mechanics of his new computer at age 14. It was parental pressure to become a doctor that kept him in school and later led him to the University of Texas.
He founded Dell in 1984 when he began making his own computers in his college room, directly selling to customers. As product demand rose, Dell dropped out to focus on the business, leading to $6 million sales in his first year. Today his investment firm MSD Capital also contributes to his fortune.