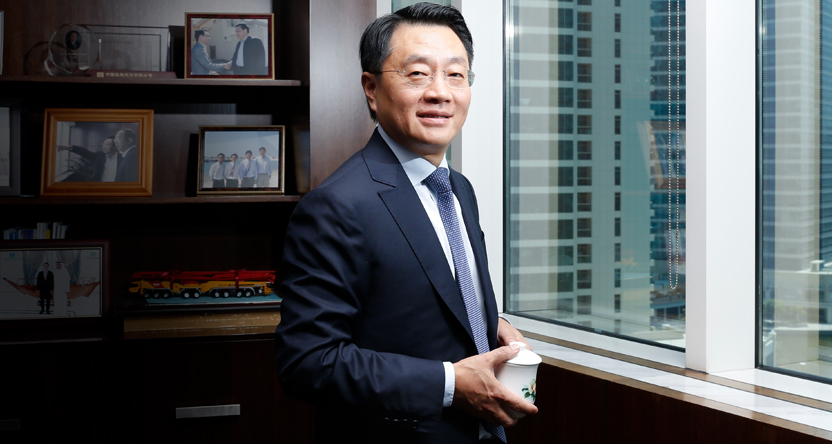 A lone painting of a Dubai landmark project, Palm Jumeirah, hangs behind Yu Tao’s desk in his high rise office. “I have this photo here to remind me of how difficult this project was,” says the president and CEO of China State Construction Engineering Corporation Middle East (CSCEC ME). New to Dubai at the time, CSCEC ME struggled with the engineering complexities that accompanied the work: constructing villas with gardens on completely reclaimed land off the coast of Dubai.

Fast forward 15 years, Tao, 48, and his team have become important players in Dubai’s real estate. To date, they have built 15 commercial and residential properties in Abu Dhabi, Dubai, Doha and Kuwait, and are now bidding on Dubai Creek Harbor Tower, in what could be their biggest project. Overseen by one of Dubai’s largest real estate developers, Emaar Properties, and valued at $1 billion, the tower is slated to be higher than 1,000 meters, surpassing Burj Khalifa, the world’s tallest building. It’s an engineering feat that is right up CSCEC ME’s alley.

Its Beijing-based parent company is an expert at constructing skyscrapers. It built Europe’s tallest building, the Federation Tower in Moscow and the majority of skyscrapers in China. Tao says CSCEC had a hand in building half of the world’s super high-rise towers—structures that are more than 500 meters long. Besides, Federation Tower, the company’s other projects include The Exchange 106 in Kuala Lumpur and The Pinnacle in Nairobi. According to a report by the Council of Tall Buildings and Urban Habitat 2018, CSCEC has constructed 178 skyscrapers while 69 more are under construction in China and South East Asia. Having set up an office in Dubai in 2003, the company narrowly missed its chance to bid on Burj Khalifa, which broke ground the following year.

Now despite a downturn in construction, Tao is going after bigger contracts and expects to secure upwards of $1 billion worth of projects this year. In addition to Dubai Creek Tower, he is planning to bid on the second phase of U.A.E.’s federal rail project Etihad Rail, Oman’s new rail network, and other specialized work to differentiate CSCEC ME from bigger competitors, such as Arabtec and Arabian Construction Company.

Last year, CSCEC ME’s revenues were up 7.14% to $750 million. The company doesn’t disclose net earnings, but growth has slowed. “We face payment delays from both the private sector and the government sector. We have disputes that take years to resolve. We have variations to be confirmed by clients which takes years. It’s a huge challenge,” says Tao.

One way Tao has dealt with payment delays is by selecting clients more carefully. In the meantime, he took out more short-term bank loans and relied on financial support from headquarters for shortfalls.

As an outsider, CSCEC ME had to adapt to the vicissitudes of the market; it hasn’t been easy. “This market is not very transparent,” says Tao. “We can hardly understand what the volume is and what is the size of the construction industry.” It’s an issue other international contractors face. “Many firms underestimated the complexity of delivering projects in the region. Be it in terms of managing clients, or running operations with often unskilled blue-collar labor from the Indian subcontinent,” says Sassan Hatam, Partner at Roland Berger Middle East.

CSCEC ME entered Dubai in 2003 in time to benefit from an oil-wealth-fueled construction boom, and Tao was sent to Dubai to take charge. Unlike foreign competitors, such as Samsung Corporation and Belgium’s Besix, the contractor flew in thousands of workers from China to erect its projects, largely because of a lack of able local sub-contractors and suppliers. Chinese workers were also cheaper than laborers from Southeast Asia for the company.

At its peak, CSCEC ME employed 30,000 people, with the vast majority from China. The recession that shook Dubai’s economy in 2009 led the company to cut its workforce by half. It no longer made economic sense to import Chinese labor, so Tao reduced the Chinese workforce to 40% of the total. “We reduced the number of Chinese workers and made them team leaders/foremen,” says Tao. The move to recruit locally cut costs by 15%-25%.

“In order to be stable in this market, it will take a while and we might need a few more of the cycles to completely understand it,” says Tao.

It’s been a steep learning experience for the civil engineer, who started out as a site engineer in the Hainan Province of China. As a student, Tao confesses that he did not harbor a particular affection for engineering. Instead, it was his parents who guided him to pursue this career.

Tao’s first foreign assignment with CSCEC was in Singapore, where he worked for 10 years, before moving to Dubai. The company had a presence in Kuwait, Qatar and the U.A.E. in the early 80’s before withdrawing in the early 90s due to the Gulf War. “Without the background of an engineer and without understanding what happens in a project site, you can’t really understand the problem or give a proper solution,” he says. Tao completed his 25th year at CSCEC in July 2018.

Despite present setbacks, Tao is still bullish. “The market has challenges, but it still offers opportunities,” he says. CSCEC ME still hasn’t entered Saudi Arabia, the region’s largest market, but Tao is interested in exploring opportunities in that country.

Right now, his focus is on securing Dubai Creek Tower, a bid that Tao and his team have been preparing for one year. He’s going up against a consortium that includes Burj Khalifa builder Besix, U.S. contractor Tishman and American engineering firm Aecom. CSCEC ME is bidding for the project single-handedly.

Although Tao won’t confirm whether CSCEC ME is offering finance on the Dubai Creek Tower project, one of its advantages is the ability to arrange better payment terms mainly from Chinese banks, such as ICBC. “Being able to offer financing solutions is increasingly becoming a differentiator that caters to tighter project owners’ budgets,” says Roland Berger’s Hatam.

If Tao manages to clinch the contract, CSCEC will be able to add another feat to its roster of high rises: the world’s tallest building.

Yu Tao is ranked #28 on the Forbes 50 Most Influential Expats in the UAE list.