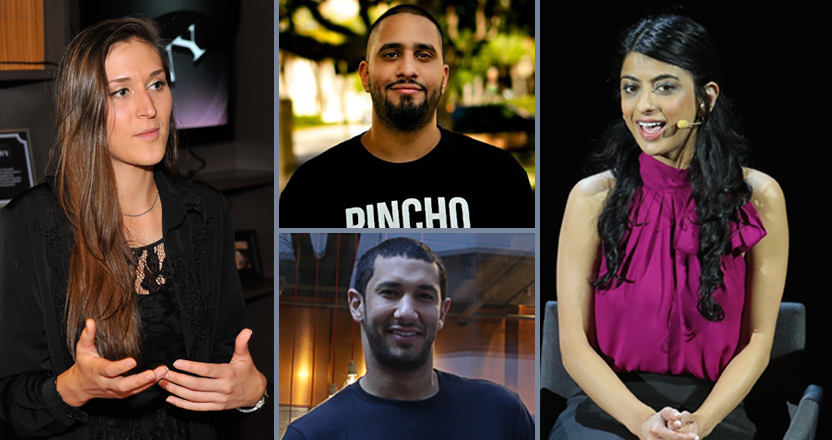 Young Arabs have been making a mark globally as they turn into innovators solving some of the world’s pressing problems or performing exceptionally well in their chosen fields.

In Forbes’ recently revealed 30 Under 30 2019 list, many such Arabs who have innovated across fields such as education, food & beverage, social entrepreneurship, and marketing & advertising are featured. Here are the young Arab achievers who have either immigrated young or were
first and second generation immigrants in the U.S.

One lunch with a homeless veteran turned Komal Ahmad from a med school student into an entrepreneur. The vet, who'd just returned from Iraq, hadn't eaten in three days. Ahmad tried to get her school's dining hall to donate excess food to the local homeless shelters, but was told there was too much liability. And so, she founded Copia, which treats hunger as a logistics problem and solves it using a tech platform. Copia's algorithm will match a business that has leftover food and matches with non-profits that can accept the food that day. Since founding the company in 2016, Ahmad has graduated from Y-Combinator and has recovered one million pounds of food.

A senior copywriter with Droga5, Nedal Ahmed was born in Libya to Sudanese parents and lived in Egypt and Yemen before immigrating to the United States at age 11. She has worked on Emmy-winning “The Talk,” a Procter & Gamble ad addressing racism; “Mama Said Knock You Out,” a spot from Chase featuring Serena Williams; and #OneGoodReason, an anti-smoking campaign for CVS praised by Michelle Obama.

When Nizar Ahmad and his cousins opened the first Pincho Factory in 2010, he had only $6.27 left in the bank. Today, the Latin-American fast casual chain has 10 locations across South Florida that drive seven figures worth of revenue, and Ahmad doesn't want to stop there: by 2022, he says, the chain will expand to another 90 locations. Ahmad has also bought a stake in Under 30 alumni company Night Owl Cookies, and serves as the dessert company's chief operations officer.

The nephew of an Egyptian telecom billionaire with the same name, Sawiris has emerged as a game changer in his own right as the founder of Yup.com, a 24/7 service that provides math tutors right to users' smartphones. Along with the company's first tutor and now-COO Aaron Price, Stanford-grad Sawiris has brought Yup's service to 730,000 students and counting.

Four MIT graduates, Michael Farid, Kale Rogers, Luke Schlueter and Brady Knight, teamed up with Michelin-starred Chef Daniel Boulud to create Spyce, a fast-casual restaurant featuring a robotic kitchen. The robotics-obsessed engineers got their start by building a prototype robot in their fraternity basement that could cook nutritious meals, serve them and clean up after. Spyce offers grain, chicken and veggie bowls for $7.50 each. With one location in Boston, it has secured $24.8 million in funding.

A Harvard research project revealed to Nadia Masri businesses' struggle to understand consumers. Paired with a joy for giving feedback to brands, the daughter of Syrian and Ukrainian emigrants was motivated to launch mobile app Perksy in 2018. Users earn points toward gift cards and rewards after completing surveys with questions from companies like Smucker's and Pepsi, which pay up to $300,000 a year to get their queries featured. Completion rates of 85% far exceed market researchers' typical 1% to 3%.

Atif Javed, who comes from a refugee family, and Aziz Alghunaim launched Tarjimly, which means "translate for me" in Arabic, in 2017 after Donald Trump imposed his travel ban. Refugees can communicate with doctors, lawyers and NGOs with help from a volunteer translator in just 90 seconds. Tarjimly has helped over 15,000 refugees and aid workers so far and covers 18 languages.

The opioid crisis is one of the biggest public health challenges in America today, with more than 115 dying of an overdose a day. Pilleve, cofounded by Gautam Chebrolu and Yossuf Albanawi, who himself struggled with substance abuse, aims to fight addiction through early intervention with its secure pill dispenser. Patients receive their opioid prescription in a Pilleve bottle and pills are dispensed one by one after patients input their pain levels, mood and side effects into an app. Pill intake data is also collected in real time and sent to providers if patients are taking more than prescribed. Pilleve has partnered with one of the largest pain clinic in Maryland to launch the device and is looking to expand its pilot to California, Massachusetts and Georgia in 2019.