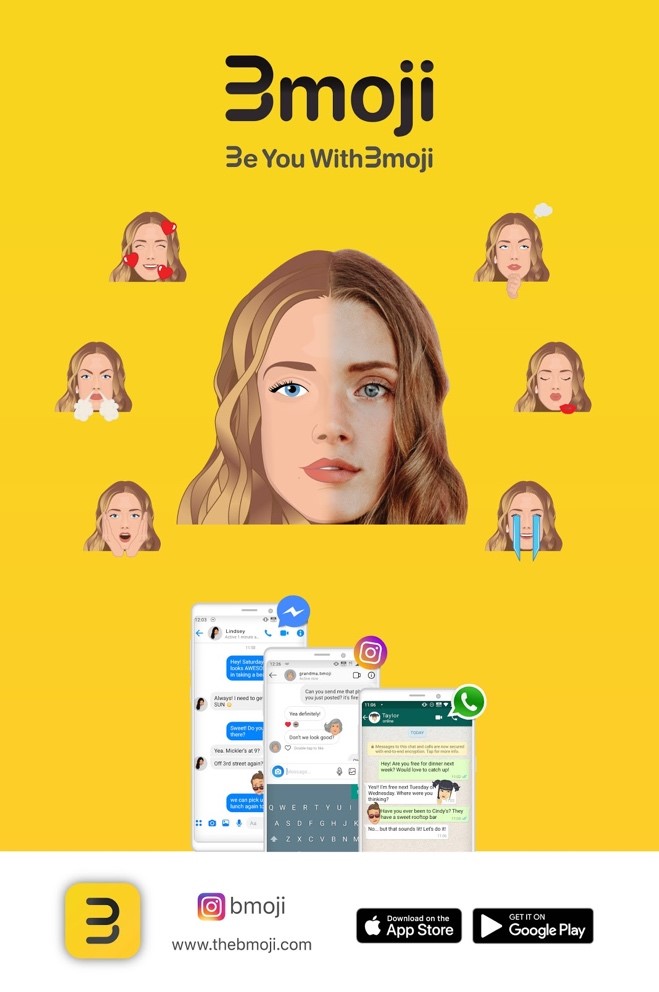 In the world of online communication, an emoji can paint a thousand words, and our love affair with these little icons shows no sign of abating. Six billion stickers and emojis are sent around the world each day, conveying moods from playful and celebratory to heavy-hearted or fuming mad. And as our non-verbal online communication evolves, people are looking for something more nuanced to represent them than variations on the simplistic smiley face.

Bitmoji’s cartoonish avatars have fed into this desire for a mini-me likeness to express ourselves on social and messages since 2014. The app, developed from the free-form comic strip app Bitstrips, allows users to create a self-representative avatar and gives them a selection of sticker packs, letting users insert themselves into easily meme-able images to send to friends and family.

The company was snapped up by Snapchat in 2016. In 2017 Bitmoji rose up the download charts to become the most downloaded iOS app of the year worldwide—with Snapchat itself in second place.

Two tech titans have recently unveiled new ventures in the personalized social avatar space, eyeing the potential for future growth. June 2019 saw the Australian launch of Facebook’s new Avatars feature. This allows users to customize a virtual lookalike of themselves for use as stickers in Messenger chat and News Feed comments. Once you personalize your Avatar’s face, hair and clothes, they’ll star in a range of frequently updated stickers expressing a range of emotions and phrases. The feature is set to roll out across the rest of the world in late 2019 or early 2020.

Apple’s Memoji arrived as part of the iOS 12 update in 2018, allowing iPhone X users to create a custom 3D animated emoji of their own face. At the Apple Worldwide Developers Conference in June 2019, the company announced the launch of Memoji Stickers. These user likenesses imitate popular emoji reactions and poses and are automatically generated for every Memoji created. As stickers they can be easily pinged over to friends and family.

This year there’s a new player is making waves in the personalized emoji sector: Bmoji. Moving beyond cute, cartoonish representations it offers a more bespoke, highly-designed look. The app has a powerful USP: each original Bmoji is expertly crafted by a human designer, rather than pieced together from generic design elements. By breaking out of a limited selection of options for hair, skin and facial features, users are provided with a more authentic representation of themselves.

Bmoji is the brainchild of Turkish real estate scion Emir Bahadir, an entrepreneur who at the age of 27 is listed as one of the trailblazers in Forbes 30 under 30. He is founder of his own brokerage and development firm BHDR, along with multiple ventures in entertainment, lifestyle, and design and has amassed a personal Instagram following of 1.7million. With Bmoji, he is on a mission to humanize digital communication by celebrating individualism.

“While looking at other apps I noticed how I wasn’t able to make the emoji my own,” says Bahadir. “It was a stretch that people would recognize who it was, unless I sent it to them personally. I saw the gap in the market, and with an education in technology, it got me thinking how I could create something much better.”

Bmoji users select their package and upload their three favorite selfies, which are used by the design team to create their personalized Bmoji. This is then coded into the app and features in a range of stickers that can be used to communicate on smartphones and multiple platforms including Facebook, WhatsApp and Instagram. The refined look has been popular with those looking for more authenticity from their personalized emoji, and combines fun with a level of sophistication. “Unlike cartoon filters that simply blur and recolor your image, Bmoji enables users to express themselves in their highest level of authenticity, by capturing what makes one an individual,” says Bahadir.

The app comes with a deck of free lifestyle emoji stickers that depict items from planes to suitcases and drinks with more realism than standard emojis. These are updated monthly and can convey users adventures with a sense of luxury and refinement. Bmoji also allows for brand collaborations, with the potential for huge exposure across social media and messaging. The Baglietto superyacht 55M has already been Bmojified.

In this age of increasingly nonverbal communication and self-presentation, a complex ecosystem of multifaceted online identities is evolving. Bmoji is a simple yet powerful tool for curating your online persona, allowing you to tailor it more to your personal taste. “It’s really important to maintain our own individuality and feel comfortable with the identity that we are communicating with,” says Bahadir. “In a constantly changing world, it only stands to reason that our needs change as well. It is very important to be able to offer everyone a product that represents them fully.”

As digital communications become more sophisticated, consumers seek ever-higher levels of personalization and customization. Appealing to this desire for a highly curated life online, Bmoji is one to watch.