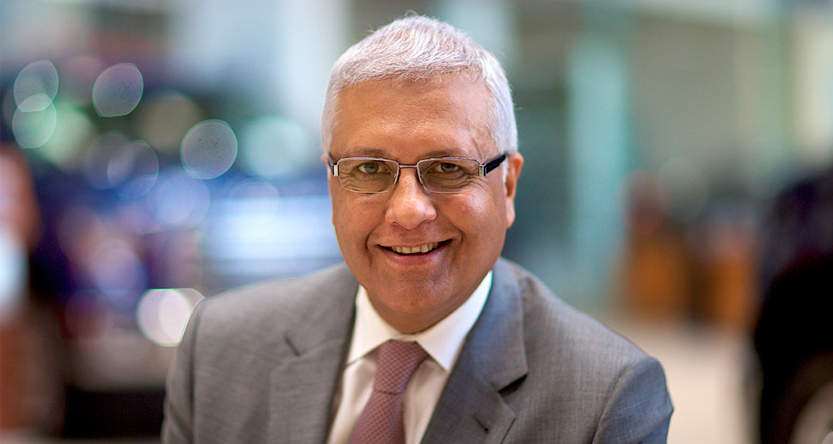 Whenever Ashok Khanna is feeling a bit low, he knows just what to do. “All you need to do is walk into the showroom and you’re going to feel really, really pepped up,” says Khanna, who’s CEO of Dubai’s Al Tayer Motors.

Khanna can walk among the latest models from Ferrari, Maserati, Jaguar, Lincoln, Land Rover and Ford. Al Tayer Motors is the official importer of all of these brands in the U.A.E.—a market known for its appetite for luxury sedans and SUVs. The company is part of the privately-held Al Tayer Group, which also operates in areas such as retail and real estate.

Yet, among Al Tayer’s stable of luxury car brands it’s the Ford franchise that has been a big driver of growth for the company over the years. As recently as 2016, Ford was the fifth most sold car brand in the U.A.E., according to Autodata Middle East.

At the wheel of Al Tayer Motors, the 58-year-old Khanna is responsible for a network of sales, service and parts centers across the U.A.E.—securing him the number 14 spot on Forbes Middle East’s Top 50 Indian Executives in the Arab World 2018 ranking.

More importantly, he’s tasked with chipping away at the market share of rivals such as Toyota, which is distributed by Al Futtaim Motors in the U.A.E.

Toyota leads the pack in the U.A.E.’s automotive market. The Japanese brand accounted for 30.5% of new cars sold in the U.A.E. last year, despite seeing a 13% drop in sales, according to Best Selling Cars Blog. Meanwhile, Ford was in the top ten in terms of market share, but saw sales drop 21%.

The U.A.E.’s automobile sector has been under pressure since 2016, due to the economic downturn caused by low oil prices. Consumers have scaled back new car purchases—an unsettling trend for Al Tayer and its line-up of luxury cars, which are the first to suffer in a downturn.

Although Khanna largely declines to go into specifics, he concedes the last couple years have come with their share of challenges. Industry-wide numbers paint a bleak picture. Autodata Middle East estimates 1 million new cars were sold in the GCC last year, down from 1.5 million in 2016.

To complicate matters, in January 2018 the U.A.E. introduced a value-added-tax [VAT] that raised the cost of new and used automobiles by 5%. Khanna says Al Tayer saw a small surge in sales in December 2017, with buyers looking to avoid the VAT, followed by a slight dip to begin the year.

Still, despite pressure on numerous fronts, Alpen Capital’s Dhanak sees a positive outlook for the automotive sector in the coming years, with oil prices recovering slightly.

Meanwhile, Khanna hasn’t remained idle. Al Tayer has continued investing in new facilities in recent years, specifically those selling pre-owned cars. Sales for pre-owned vehicles have grown more than 14% annually over the past five years for Al Tayer. “I think their importance will grow in the years to come,” says Khanna.

Last year, Al Tayer Motors opened a new facility that it claims includes the Middle East’s largest pre-owned car showrooms for Ford, and the first pre-owned showrooms for Jaguar, Land Rover and Maserati in the GCC. The 55,000 square meter complex, located in Dubai, offers a selection of more than 2,500 vehicles across five brands.

“This is going to be our dealership of choice,” says Khanna.

Overall, Japanese brands topped the used car market in the U.A.E. last year, led by Toyota and Nissan, according to CarSwitch.com. Ford ranked fifth, with an 8% share of the market.

Focusing on pre-owned vehicles isn’t the only new direction for Al Tayer. Khanna is developing the company’s online presence too. E-commerce platforms now target the growing market for pre-owned cars, evidenced by a number of websites in the U.A.E. allowing prospective buyers to compare and shop for used vehicles online, including Dubizzle, SellAnyCar.com and CarSwitch.

Through Al Tayer Motors’ e-commerce website and its app, customers can book test drives, search pre-owned vehicle listings and make car payments. Not that Al Tayer is moving away from brick and mortar dealerships. He hopes the digital platforms will help draw customers in. “I think omni-channel is going to become more the norm now,” says Khanna.

Khanna insists he’s keeping an open-mind. “Anyone who stops learning is old, whether at twenty or eighty.” A convenient quote, considering it’s from Henry Ford.

Khanna doesn’t come off as a typical car enthusiast. Despite professing a preference for keeping a low-profile, these days Khanna alternates between a Maserati, a Jaguar and a Land Rover for his daily commute. “I do have a few favorite cars,” he says.

He was born and raised in New Delhi, where his father worked as a government employee. He earned his bachelor’s in business in 1980 in India, after which he participated in a course to become a certified chartered accountant. “I’ve always been rather numerical and analytic,” he says.

He got his first job working as a finance manager for Imperial Chemicals Industries in India. After spending a couple years with the British chemical manufacturer, he was enticed to Dubai with a job offer from Al Tayer Motors.

Established in 1982 by Al Tayer Group, it was then still a small company—but it represented high-profile brands, with the distribution rights for Jaguar already in the fold. “I mean who could resist an offer from a company that had exclusive rights for cars such as Jaguar, Land Rover and Ferrari?” says Khanna.

He arrived in Dubai in 1990, working in Al Tayer Motors’ finance department as the company grew. It soon added a car rental division and in 1998 became the official importer of the Maserati brand in the U.A.E. Three years later, Al Tayer Motors got the franchise for Ford in the U.A.E., which proved to be a major turning point for the company. Ford gave it a mass market lineup of vehicles to complement its luxury brands, at a time when the U.A.E.’s economy was prospering.

As he advanced in Al Tayer, he transitioned from finance to operations, becoming CEO in 2006. “I felt it was time for me to shift gears, literally,” he says.