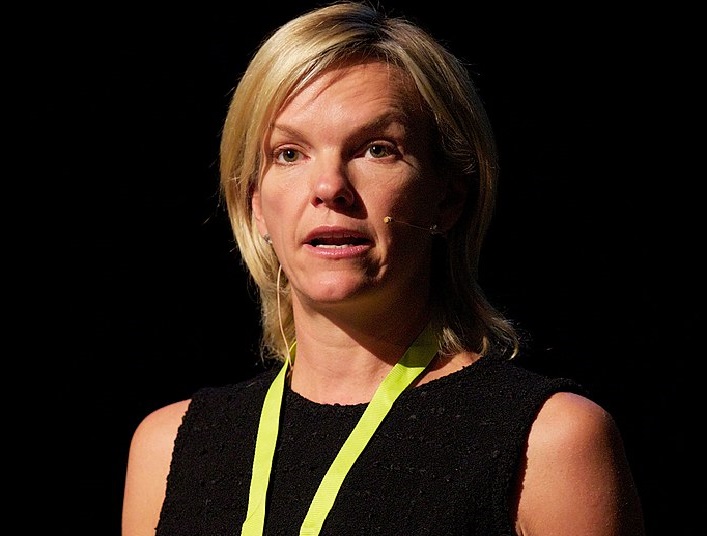 A trio of twentysomething women stand in a cramped and overheated studio in Santa Monica preparing for the start of a baking competition. The show bears little resemblance to The Great British Bake Off, the long-running PBS series in which amateur bakers try their hands at a meringue roulade or raspberry blancmange. For starters, the contestants will be cooking their desserts in Easy-Bake Ovens. And two of the three contestants are, well, baked. “I'm wasted,” says one.

The contestants on State of Mind are competing for a kitschy prize—a Golden Gnome with extended middle finger—as well as for the attention of 190 million daily active users of Snapchat, part of a growing lineup of  mobile-first programs produced by Elisabeth Murdoch’s Vertical Networks. The four-year-old digital studio creates shows engineered to grab attention in the cluttered mobile environment, where Vertical Networks’ programs vie for attention with text messages, Fortnite and Instagram updates.

These shows — including My Ex-BFF Court, which adjudicates petty beefs between former friends, and Styled by Science, a makeover show with a robotic twist — are delivered in four-to-five minute episodes, and appear in Snapchat’s Discover section. Some series get tens of millions of views a month. But as other digital publishers have discovered, Vertical Networks can’t survive (or thrive) on revenue from a single platform alone. Although Snapchat reaches nearly half of all 18- to 34- year-olds in the U.S. on a given day, according to a Nielsen analysis, the messaging app has struggled to sell out its nearly infinite ad inventory, say people familiar with the matter.

So Murdoch’s studio is expanding its entertainment brands to new platforms. Its Brother channel, which gained popularity on Snapchat for dispensing unvarnished brotherly advice on topics a younger sibling would never ask mom or dad, has been adapted into a book. State of Mind is courting audiences in other digital locales such as TikTok, where it has attracted 180,000 subscribers, and Instagram's IGTV, where it brings in about 100,00 viewers per episode. Another show that debuted on Snapchat has aired, in expanded form, on Fox TV stations around the country.

“Our intent has always been to be a mobile-first rather than a mobile-only company,” said Murdoch in an emailed response.

Vertical Networks takes a scientific approach to its creative work, evaluating every second of every episode of every show and categorizing each shot and action. It learned it has just three seconds to engage the viewer. It also employs other tools to keep the audience watching, such as displaying text on screen (for those watching without sound), or showing the action playing out across a split-screen.

“Time is a luxury — especially when the amount of time people spend on their mobile devices consistently increases,” Murdoch says. “Content for mobile devices requires an extra level of engagement to keep audiences through a full episode. And it’s harder than it looks.”

From Fox To Shine

The instant gratification theater of mobile viewing is a very different corner of the entertainment  world than the one Murdoch first inhabited. The Vassar-educated daughter of billionaire media mogul Rupert Murdoch, Elisabeth Murdoch began her career working in the programming department of the Fox TV-station group. After a brief stint as program director of a small Fox TV station in Salt Lake City she joined the programming team at FX. After a year, she decided to strike out on her own, acquiring two small NBC-affiliated stations in California with her husband, which they later sold for a reported $12 million profit.

Elisabeth Murdoch intended to pursue her MBA at Stanford Graduate School of Business, but, when she called to inform her father, he had other ideas, according to a New Yorker profile. The elder Murdoch installed her at BSkyB in London, where she handled marketing, scheduling and program acquisitions.

She left in 2001 to strike out on her own once again, founding an independent production company with what she called an “inspirational” name — Shine. Murdoch began to expand, in 2008 acquiring Reveille, the American company behind the U.S. version of The Office, and several U.K. and European production houses. It produced such reality show franchises as MasterChef and The Biggest Loser.

A decade later, she reaped a reported $214 million windfall when she sold Shine to her father’s media conglomerate, then known as News Corp., in a $674 million deal. Shine later merged with the Dutch media company,  Endemol, to create a production company behind such current hits as Black Mirror and Big Brother.

Elisabeth Murdoch was early to recognize the potential of mobile video in reaching an audience captivated by their smartphone devices. A later arrival, media mogul Jeffrey Katzenberg, grabbed headlines last year as he raised $1 billion to launch mobile subscription video service Quibi — competition that she views as validating the market’s potential.

“As more investment goes into the premium mobile content ecosystem, we feel that we are in a great position to capitalize on this opportunity,” says Murdoch.

By all accounts, Vertical Networks has been successful at creating break-out hits on Snapchat. Its voyeuristic dating show, Phone Swap — in which two strangers meet on a blind date and inspect the contents of each other’s phones before deciding whether they want to continue seeing one another — attracts about 10 million monthly viewers, and 9 million subscribers.

Brother is one of the most successful of Snapchat’s Publisher Stories. It averages 25 million monthly views and has produced spinoff series that include You Ask, We Answer, in which it responds to life’s enigmatic questions (ie: Can a samurai sword really cut through anything?), and Stacked, in which two players respond to  challenges written on giant Jenga-like stackable blocks or strip (the game ends when the stack falls and someone’s naked). By comparison, a weeklyCK television show like the CW network’s teen drama Riverdale, regularly attracts more than 1 million viewers an episode, according to Nielsen.

Vertical Networks earns money from advertising as well as by putting together marketing campaigns for brands eager to reach “mobile native” consumers (it won't disclose revenues).

Ad revenue from Snapchat isn’t enough — hence the expansion. “I don’t personally view this as a challenge of survivability,” said Chris Jacquemin, head of digital for the WME talent agency. “You’ve got to diversify.”

Other digital publishers have followed a similar path. Vox Media Studios, a unit of digital publisher Vox Media, plans to make a dozen series for television this year, including the just-announced food show it’s developing for Hulu in partnership with model and cookbook author Chrissy Teigen and Momofuku restaurant founder David Chang. Axios, the digital news site for the harried reader, is bringing its documentary series to HBO for a second season.

Indigenous Media, a digital media studio founded by filmmakers Jon Avnet and Rodrigo Garcia, similarly found new ways to capitalize on the audience Snapchat amasses. Three years ago it released a “found footage” horror movie Sickhouse, developed in the style of the 1999 hit The Blair Witch Project, in which footage shot on an iPhone was uploaded in real time to influencer Andrea Russett’s Snapchat account. The tale about a mysterious cabin in the woods played out over five days and attracted 110 million views. To learn the ending, viewers needed to buy the full feature film on iTunes or Amazon.

“For us, it was a really cool example of how you can monetize social media platforms in a way that may not be immediately obvious,” says Indigenous Chief Operating Officer and Co-founder Jake Avnet. “Taking all the buzz and noise you can generate and then turning that into a transactional opportunity.”

“It’s a great example of what ‘really good’ looks like for us,” Vertical Networks CEO Jesus Chavez says. “To be able to distill the best parts of that format in a digital environment, but then being able to have that sort of grow into it into a bigger place.“

The studio’s fare has jumped from the small screen to TV, and now to print. Earlier this month, it authored a paperback, How to Not Be a Dick, which seeks to capitalize on the popularity of Vertical Networks’ Brother Snapchat channel. It offers advice on life, sex, money, dating and health, with chapter titles that look as if BuzzFeed gave birth to a 340-page listicle.

“We will help them navigate an increasingly complicated world — the classroom, the locker room, the office, the bar, the bedroom, the DM — where the old rules, labels and standards no longer apply,” Vertical Networks wrote in its pitch to publisher HarperCollins. “We won’t condescend, we won’t mince words — we’ll give them straightforward, occasionally brutal (but always funny) honesty.”

Snapchat users presumably will watch one of the shows, then pick up the book. The lifestyle manual for millennial males also has inspired a new series, Morning After, in which the viewer uses clues from his or her surroundings to determine what happened last night.