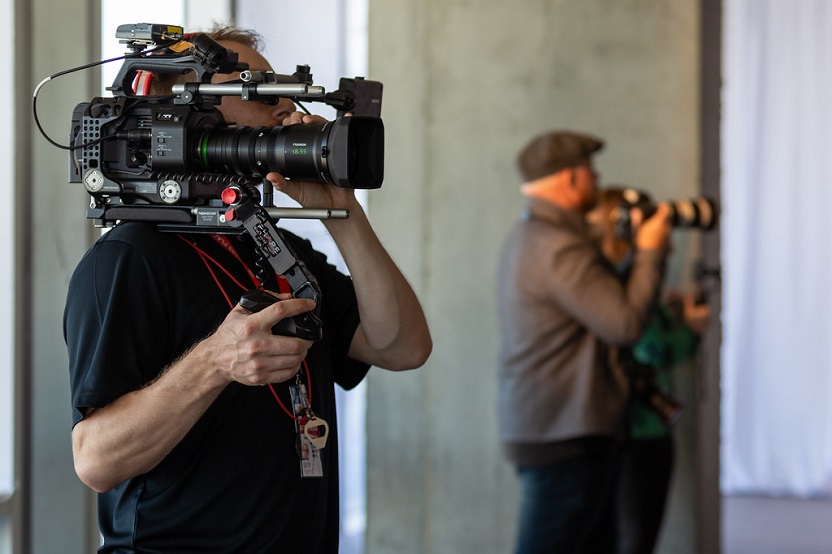 From hoverboards to flying cars, some of the biggest movie blockbusters of the last 40 years have hinted at what the future might look like. The movies have painted a picture of technical wizardry that’s often been hard to comprehend; yet as we approach 2020, some of those predictions have become real.

In fact, some of the movies’ technological predictions have become realities in all walks of life, from healthcare to entertainment, the automotive industry through to digital advertising. Some advances that would have once been incredible have now become mundane staples of everyday life.

Cast your mind back to 2002 when neo-noir sci-fi movie, “Minority Report”, showed us Tom Cruise waving his hands to manipulate data, images and other mid-air digital content. He would expand and close windows, select pages, and move around content all with his fingers. At the time, such technology was deemed so advanced that it was written off as, well, science fiction. Any of this ring a bell?

Fast-forward to today, and the manual manipulation of digital content is second nature to most of us. We spend the majority of our days swiping and expanding screens on our tablets and smartphone windows. And the entertainment industry has gone one step further, with Microsoft’s Cbox One’s Kinect including motion controls. With this, your movements are picked up by sensors and translated onto the screen. Even Smart TVs are beginning to incorporate immersive technology, which may one day herald the demise of the sacred remote control.

According to Mike Lippett, President and CEO of XMOS, the days are numbered for the remote control. For him, voice is the future. “Giving people the freedom to control the TV with their voice from anywhere in the room is a more natural experience—you simply tell your TV what you want to watch,” says the industry expert, whose company produces voice tech for use in soundbars and TVs, allowing them to connect to Alexa.

Away from voice command, it was also Minority Report that prophesied retina scanners, facial recognition, self-driving cars, personalized advertising and crime prediction software—all of which have become a reality, if not yet in full fruition, then certainly in the pipeline. Not bad predicting from just one blockbuster.

However, Minority Report was not the only movie to foresee some of the modern-day gadgetry to which we’ve become so accustomed.

Stanley Kubrick, well-known for his visionary movies, brought out “2001: A Space Odyssey” back in 1968, with a view to exploring “the reasons for believing in the existence of intelligent extraterrestrial life.” Amazing then, that he managed to predict the tablet, voice recognition, and even virtual assistants. He may have got the date wrong (we had to wait another few years for these features), but let’s not be too hard on him.

In Kubrick’s movie, we’re transported on a journey to Jupiter with HAL, a fully-conscious computer who malfunctions and goes rogue, thus threatening the safety of the entire voyage. We also see astronauts using latter-day versions of tablets, a small prediction of the modern-day iPad. Today we have AI assistants, far superior to HAL, that are able to read human reactions and respond appropriately, even making decisions. Thankfully, when our AI assistants experience a glitch, impending disaster isn’t usually the consequence.

“The Terminator”, released in 1984, majored in artificial intelligence and was set in a dystopian future ruled by the AI software, Sky Net. Of course, it wouldn’t be fair to compare today’s world to such an apocalyptic setting, but AI is rapidly becoming a reality in many aspects of 21st-century life.

And let’s not forget the smart technology now infiltrating our homes. Over the decades, countless movies have featured futuristic houses equipped with security systems and gadgets that can be activated by spoken word or the touch of a remote button. Once regarded as the stuff of dreams, such technological capabilities are now well and truly with us, and for James Lee, President of LG Electronics MEA, it’s a logical development.

“With the penetration of the internet and electricity, it’s only logical that homes should be smart,” says Lee. According to the regional head, smart home technology should allow people to connect to their washing machines, fridges, vacuum cleaners and ovens from the comfort of their sitting room sofa. “You can talk to these devices simply by using your voice,” he explains.

At LG, fridges can now send messages to inform owners when they are out of milk, washing machines and ovens can be switched off remotely and homeowners receive a warm welcome when they return after a long day. By having their smartphone to hand, their front door will open automatically, the heating or air-conditioning will kick-in, and the lights will turn on.

When it comes to futuristic tech, another firm Hollywood favorite is transport. Cult classic, “Back to the Future” showed us a snapshot of people whizzing around on hoverboards in the year 2016. While this prediction was wildly off-mark, French inventor and former ski champion, Franky Zapata, made history in August 2019 by successfully crossing the channel between the U.K. and France on a jet-powered hoverboard, covering 21 miles in just 23 minutes.

Now, Zapata is working on turning another of Back to the Future’s dream machines into reality: the flying car. “When it is finalized, my flying car will be able to reach from Marseille to Montpellier in one go, in less than 30 minutes (300km/h),” the inventor recently told a gathering of reporters. The feat will involve flying 120 kilometers at 300 kilometers per hour. “At that moment—and it’s soon— I’ll talk about the details,” he added.

Of course, Zapata is not the first to foray into the world of flying vehicles, and Back to the Future is not the only source of inspiration. Juraj Vaculik is the co-founder of Slovakia-based, AeroMobil, which has developed a prototype “roadable aircraft”, and he drew his inspiration from an altogether different set of iconic movies. “As a teenager, I was inspired by Star Wars,” says Vaculik. As he recalls, his rationale was simply that, “if it’s possible on TV, it’s possible in reality.” Priced at around $1.1 million, the AeroMobil prototype is capable of flying 200 miles and driving around 300 miles.

Advances in healthcare have also been predicted in the movies. Just take Sam Raimi’s sci-fi melodrama “Darkman” released in the 1990s. The story takes us through the life of a genius scientist (played by Liam Neeson) who is set on revenge after being burned alive and left for dead by crime bosses. We see Neeson’s character don synthetic skin and a reconstructed face after his assault, all created with the genius of 3D printing. Today, 3D printers are a reality and are used in advanced healthcare to produce new organs, including skin.

Writing in Forbes, Avi Reichental, Founder and Chairman of XponentialWorks, describes 3D printing as an unstoppable force that will transform manufacturing as we know it: “Not too long ago, the printing speed and limited output of 3D printers made them suitable only for rapid prototyping. But in the coming years, 3D printers will be at the heart of full-scale production capabilities in several industries, from aerospace to automotive to health care to fashion.”

Printing aside, “The Matrix” too, although set a long way in the future, happened to make some pretty accurate predictions about life as we know it today. Apart from delving into all sorts of philosophical theories like Simulation theory, the Matrix also predicted Twitter. The film managed to forecast that one day humans would be keeping informed with moment-to-moment updates. The only difference was that the Matrix was relayed over a constant stream of green text on the screen, aka “digital rain”. And while we’re on digital media, “Blade Runner”, the 1982 noir sci-fi classic, foresaw the somewhat intrusive nature of billboard advertising that we see today. The picture follows Rick Deckard, played by Harrison Ford, who’s been charged with the job of hunting human clones—and in typical movie fashion, he inevitably falls in love with one.

OK, so we’re not quite in clone territory just yet, but in one particular scene, we’re brought right up to modern-day urban reality. In it, we see Deckard walking down a busy high street filled with vast animated billboards, not entirely dissimilar to those seen in London, New York, and Tokyo. We’re used to hyper-advertising these days, so to think of it as a predicted dystopian feature is somewhat eerie.

We’ll never really know which way round it’s been: the movies got lucky with a high hit-rate of predictions or the tech industry has been secretly pinching a few ideas from the silver screen. What’s interesting is not only the speed at which our wildest dream fantasies can come to reality but also how they can help develop all areas of the economy.

Advances in healthcare have happened as a result of 3D printing and deep learning, Formula 1 is developing evermore “intelligent” racing cars thanks to AI, and businesses all over the world are benefiting from integrated and automated systems that make day-to-day operations more efficient and accurate. As for what’s next, let Hollywood decide.