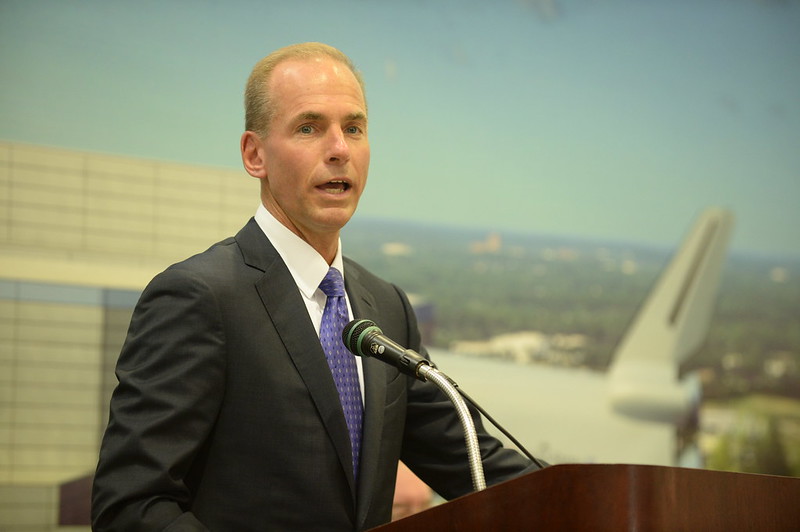 Amid mounting criticism over CEO Dennis Muilenburg’s handling of the 737 MAX crisis, Boeing on Monday said that he would be replaced by chairman and longtime board member David Calhoun.

While Calhoun may do a better public relations job than Muilenburg, some observers questioned whether he represents a real change in direction for the embattled company.

“The Board of Directors decided that a change in leadership was necessary to restore confidence in the Company moving forward as it works to repair relationships with regulators, customers, and all other stakeholders,” the company said in a statement.

The move comes nine months after global aviation safety regulators grounded the 737 MAX, Boeing’s best-selling plane, after the second of two deadly crashes. Muilenburg has been faulted for a leaden public response to the crisis, angering the families of the deceased, lawmakers and members of the public with his reluctance to acknowledge that faults with the plane’s flight control system were responsible for the crashes, which killed 346.

Under Muilenburg’s leadership, Boeing repeatedly promised airlines and investors that it was near winning approval for fixes for the flight control system and other changes that would allow the plane to return to service.

Two weeks ago, Muilenburg was upbraided by FAA Administrator Stephen Dickson, who summoned Boeing’s CEO to a meeting in Washington to address concerns that the company was attempting to publicly pressure the agency to move more quickly.

Last week, Boeing announced it would halt 737 production in January, with roughly 400 planes in storage that it had produced since March that it has been unable to deliver to customers.

Calhoun is well-respected, having spent 26 years as an executive at Jack Welch-era General Electric, including a stint running the aircraft engines unit, and he helped guide Caterpillar through a delicate time recently as chairman of the board when the heavy machinery maker was under investigation by the IRS over its accounting and facing troubles in China.

A much more comfortable speaker, Calhoun should be a more effective face for the company than Muilenburg with Congress and the public, and help improve its strained relationship with airlines and the FAA.

While that might be a solution for Boeing’s short-term problems, Richard Aboulafia, an aerospace analyst with Teal Group, cautions that Calhoun’s recent experience doesn’t lend confidence that he has the skills Boeing needs long-term. Calhoun has spent the past five years in private equity as a managing director at Blackstone Group, and before that eight years as head of the market research firm Nielsen. “[It] is perhaps the wrong toolkit for an engineering company that needs to restore its capabilities and reputation,” he says.

Given that Calhoun has been on Boeing’s board since 2009, it’s questionable whether he can offer a fresh approach, analyst Ronald Epstein of Bank of America/Merrill Lynch wrote in a client note. “We wonder if appointing from within, especially an insider that has been with the company for 10 years, signals more of the same from Boeing vs. an outside appointee who may have offered more of a change of pace and culture.”

Calhoun, who was appointed chairman in October when the title was stripped from Muilenburg, will be replaced as chairman by Lawrence Kellner, a board member since 2011 who was CEO of Continental Airlines from 2004 through 2009.

Boeing has a mandatory retirement age of 65 and Calhoun is 62. While the board could be amenable to giving Calhoun an extension, CFO Smith may be in position to take the job eventually, says Jeffrey Sonnenfeld, a professor at the Yale School of Management. “This gives him runway to be an appropriate successor.”

It’s an abrupt end for Muilenburg, who spent his entire 34-year career at Boeing, starting as an intern and rising to run the defense division before he was tapped to become CEO in 2015.

Until this spring, Boeing seemed to be going from strength to strength on Muilenburg’s watch, riding a boom in aircraft orders amid a historic expansion in air travel. Like his predecessors Jim McNerney and Harry Stonecipher, Muilenburg rewarded shareholders handsomely, devoting roughly 95% of operating cash flow to the company’s steadily rising dividend and share buybacks. Boeing shares climbed fourfold from February 2016 to a peak of $446 at the beginning of March, compared with a 63% rise for the Dow industrials over the same period.

However, critics have charged that the focus on financials has served to erode the primacy that engineering concerns used to have at the company.

The seeds of the 737 MAX crisis were sown well before Muilenburg was involved with the commercial airplanes division, with the decision in 2011 by Boeing to develop an updated version of the aging 737 with larger, more efficient engines rather than build an all-new single-aisle plane. Those larger engines changed how the 737 handled, prompting Boeing to develop software called the maneuvering characteristics augmentation system (MCAS) to automatically push the plane’s nose down in certain situations. MCAS’ design flaws are believed to be primary causes of the two deadly crashes in Indonesia and Ethiopia.

However, Boeing’s response to the crisis has been seen as squarely Muilenburg’s responsibility. He came under fire for public statements that were seen as scripted, lawyerly and lacking in empathy for the families of the deceased. Airlines and regulators have accused Boeing of being slow to share information, including the fact that the company knew in 2017 that an alert wasn’t working on most MAX aircraft that was intended to warn of a disagreement between the plane’s angle of attack sensors, which played a key role in the crashes.

It’s indicative of a corporate identity that under Muilenburg’s leadership “has been less than humble,” analyst Robert Stallard of Vertical Research wrote in a client note Monday, pointing also to the decision to raise production of the 787 Dreamliner to 14 planes a month, which has been walked back, and a strategy that seemed to assume that the historic boom-bust pattern of the aerospace sector is a thing of the past.

Muilenburg was widely seen as on his way out, with the ideal scenario being that he would depart sometime after the 737 MAX had returned to service. But with commentators increasingly calling for Muilenburg’s head last week following the announcement that the company would idle 737 production, the company suffered a stinging embarrassment Friday when a test launch of its Starliner space capsule went awry. Because a timer was set incorrectly, it was unable to reach an orbit to rendezvous as planned with the International Space Station.

The union representing Boeing engineers welcomed the leadership transition, saying in a statement that under Muilenburg, the company’s reputation for quality had “been unquestionably tarnished.”

Michael Stumo, who has become a prominent critic of Boeing since his daughter Samya Stumo’s death in the Ethiopia crash, said, “Mr. Muilenburg’s resignation is a good first step toward restoring Boeing to a company that focuses on safety and innovation.” He called for “underperforming or underqualified” board members to resign as well.