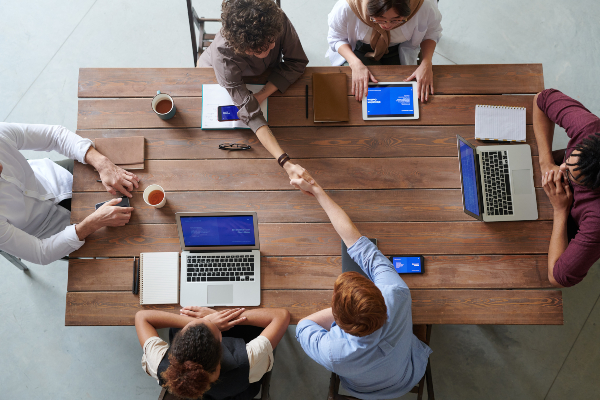 Photo by fauxels from Pexels

Merges and acquisitions (M&A) activity in the Middle East had a robust start of 2020, with three new mega-deals announced only one month in.

Last year, deal-making remained robust in the Middle East, especially in Saudi Arabia and the UAE, with transaction values boosted by mega-deals such as the merger of Saudi British Bank and Alawwal Bank, and by cross-border inflows into the UAE, according to a report by Baker McKenzie.

The research predicts that the Middle East will remain an attractive target region for both domestic and foreign investors. As per the report findings, the Middle East was anticipated to see $45 billion in M&A deals in 2019.

Here are three mega-deals that have been announced in 2020:

In late January, First Abu Dhabi Bank announced that it has entered into exclusive discussions with Bank Audi to acquire the latter’s owned subsidiary in Egypt.

According to the UAE-based bank, a working group has been formed to assess a potential acquisition. However, no valuations have been announced and there is no certainty that these discussions will result in a transaction, which is subject to regulatory approvals.

Bank Audi launched its operations in Egypt subsequent to the acquisition of Cairo Far East Bank SAE in March 2006. It has since developed a direct presence through establishing a branch network of more than 51 branches and 166 ATMs as of November 2019.

Bank Audi Egypt reported an increase in its deposits base by $404 million over the first half of 2019. Its total assets exceeded $4.4 billion as of March 2019.

On the 29th of January, Vodafone Group and Saudi Telecom Company (stc) revealed that they had signed a Memorandum of Understanding for a potential sale of Vodafone’s 55% in its Egypt’s unit to stc for $2.392 billion.

The deal values the company at $4.3 billion. It will include the use of the Vodafone brand, preferential roaming arrangements, access to Vodafone’s central procurement function, and a range of other services.

The deal marks the first mega-deal in the region’s telecommunication sector of 2020. Vodafone Group owns 55% of Vodafone Egypt, while the remaining stake is held by Telecom Egypt, which plans to keep its own share. The company generated revenues of $1.2 billion in the fiscal year ended March 2019.

Vodafone Egypt had a market share of over 42% of Egypt’s overall telecommunication market, with more than 40.2 million subscribers as of October 2019 end, according to the latest statistics released by Egypt’s Ministry of Communications and Information Technology.

Earlier this month, the Abu Dhabi Power Corporation, ADPower, which owns most of the water and electricity assets across Abu Dhabi, offered to transfer certain assets to Abu Dhabi National Energy Company (TAQA) in exchange for 106.3 billion shares and the termination of a land lease agreement between the two parties.

The potential transaction will create one of EMEA’s largest 10 integrated utilities players by regulated assets worth around $54.45 billion. Meanwhile, TAQA will be one of the largest listed companies on the Abu Dhabi Exchange (ADX).

The offer implies an equity value of TAQA of AED 4,156 million ($1.1 billion). Post completion, ADPower would own 98.60% of the entire issued share capital of TAQA.

Photo by fauxels from Pexels.