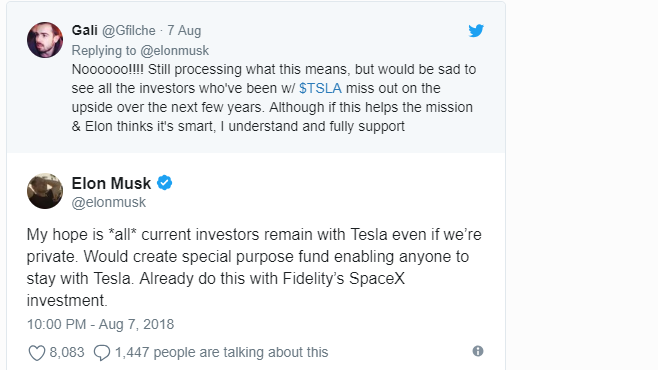 It's no secret Elon Musk and Tesla have been afforded considerable leeway by their loyal following of shareholders.

Production targets, profitability goals, and electric car delivery deadlines are often treated as aspiration and glossed over when missed. Investors have also been willing to roll with strategy shifts like Musk's acquisition of SolarCity and a flurry of his non-car projects like traffic-avoiding tunnels, flame-throwers, and red surf boards. However, Elon Musk's proposal on Tuesday to potentially take Tesla private raises a new promise that the billionaire entrepreneur cannot break. Musk, in somewhat contingent language, guaranteed to Tesla's loyal investor base they'll be able maintain their investment in the company, even if it is taken private and removed from stock markets. Here's what Musk said, by way of a letter to employees: "First, I would like to structure this so that all shareholders have a choice. Either they can stay investors in a private Tesla or they can be bought out at $420 per share, which is a 20% premium over the stock price following our Q2 earnings call (which had already increased by 16%). My hope is for all shareholders to remain, but if they prefer to be bought out, then this would enable that to happen at a nice premium." It's a big, big deal. Many shareholders view Tesla as a bet on the future and they have shown no interest in selling shares at any price. At first glance, the statement should be reassuring to these holders, who have weathered a wild but lucrative ride due their unflinching belief in Musk's talent and long-term vision. They will be given the choice to take cash at a price of $420-a-share, or maintain their investment, Tesla said. However, Musk said he "would like" to structure the take-private so all shareholders have this choice, and his "hope" is for them to remain invested in a private Tesla. "Hope" has long been considered a four-letter word on Wall Street and this qualified language may offer an out if Tesla's small-time shareholders are in fact left out. After all, there isn't an obvious way for mom and pop investors to own shares in a public company that is taken private. Generally, it is 'qualified' or 'accredited' investors who have the ability to own stock in private companies, or buyouts. "I know of no legal way to offer public shareholders of a listed company an equity security while also going private," says John Coates, an expert in mergers and transactions at Harvard Law School. He adds by email to Forbes, "I also know of no legal way to offer $X billion worth securities of any kind to more than 35 unaccredited investors, without registering the offering with the SEC." Earlier this year, a NYSE-listed company called Renren hived off its valuable stakes in fintech firms like SoFi to a private entity and forced non-accredited investors to take a cash payment, drawing cries of foul. Another idea Coates raises is for Musk to create a new hedge fund, limited to accredited investors, that offers limited partner interests in exchange for shares. Then a combination of large direct investors could buy stock from Tesla and cash out the remaining public investors. Of course, this would fall short of Musk's promise. Mutual funds may be an easier vehicle to own shares because they already allow non-accredited investors the ability to invest in private companies. Fidelity has a number of funds, including its Magellan and OTC funds, that have invested in Musk's valuable privately-held space exploration company, SpaceX. Those funds are open to non-accredited investors and hold no minimum investment, but SpaceX holdings are part of a broader discretionary portfolio, thus the concentration of ownership is far more diluted than a single holding. Musk even referred to these funds when attempting to explain investors' potential options on Tuesday. Here's what he said on Twitter:

But the facts weren't entirely accurate. Fidelity doesn't own its SpaceX shares through a special purpose vehicle (SPV). One large, longstanding Tesla shareholder (who owns shares in a mutual fund and via high net worth and institutional accounts) told Forbes they expected the only challenge to come from individual, self-managed accounts held at custodians. These investors, who may not meet accreditation, might have to fill paperwork to verify that they chose to own private shares. Otherwise they might be liquidated at Musk's $420-a-share price. Tesla, in this scenario, might find itself reaching out by proxy to its broad base of individual holders, an expensive and daunting task. Musk said his impetus for taking Tesla private is to incubate the company's growth out of the spotlight of myopic investors, or even those betting fervently against its success. "Basically, I’m trying to accomplish an outcome where Tesla can operate at its best, free from as much distraction and short-term thinking as possible, and where there is as little change for all of our investors, including all of our employees, as possible," he said. After Tesla scales its production and becomes more mature, Musk alluded to a return to the stock market: "In the future, once Tesla enters a phase of slower, more predictable growth, it will likely make sense to return to the public markets." It's all a dramatic strategy shift from the beginning of the year when Tesla outlined a decade-long, $100 billion incentive plan for Musk, which was aimed at aligning the entrepreneur with his shareholders. In that plan, Tesla would fork over $100 billion in option grants if Tesla hit a market capitalization of $650 billion in a decade (an about $600 billion gain in value). "Elon’s only compensation will be a 100% at-risk performance award, which ensures that he will be compensated only if Tesla and all of its shareholders do extraordinarily well," Tesla said when unveiling the plan on Jan. 23. If Musk and Tesla can't offer a credible way for Tesla's current crop of small time backers to participate in a take-private deal, these interests will have diverged in a major way. Simply put, it's a promise Musk can't break. A Tesla spokesperson declined to explain in greater detail how the company planned to offer all of its investors an opportunity to maintain their holdings in a take-private scenario, instead pointing Forbes to Musk's Tweets and the company's Tuesday letter. Hopefully more detail is forthcoming. Perhaps, as Musk attempts to pull off the greatest buyout in history, he will pioneer new ground in financial gymnastics. (Disclosure: I own one Tesla share for reporting purposes)