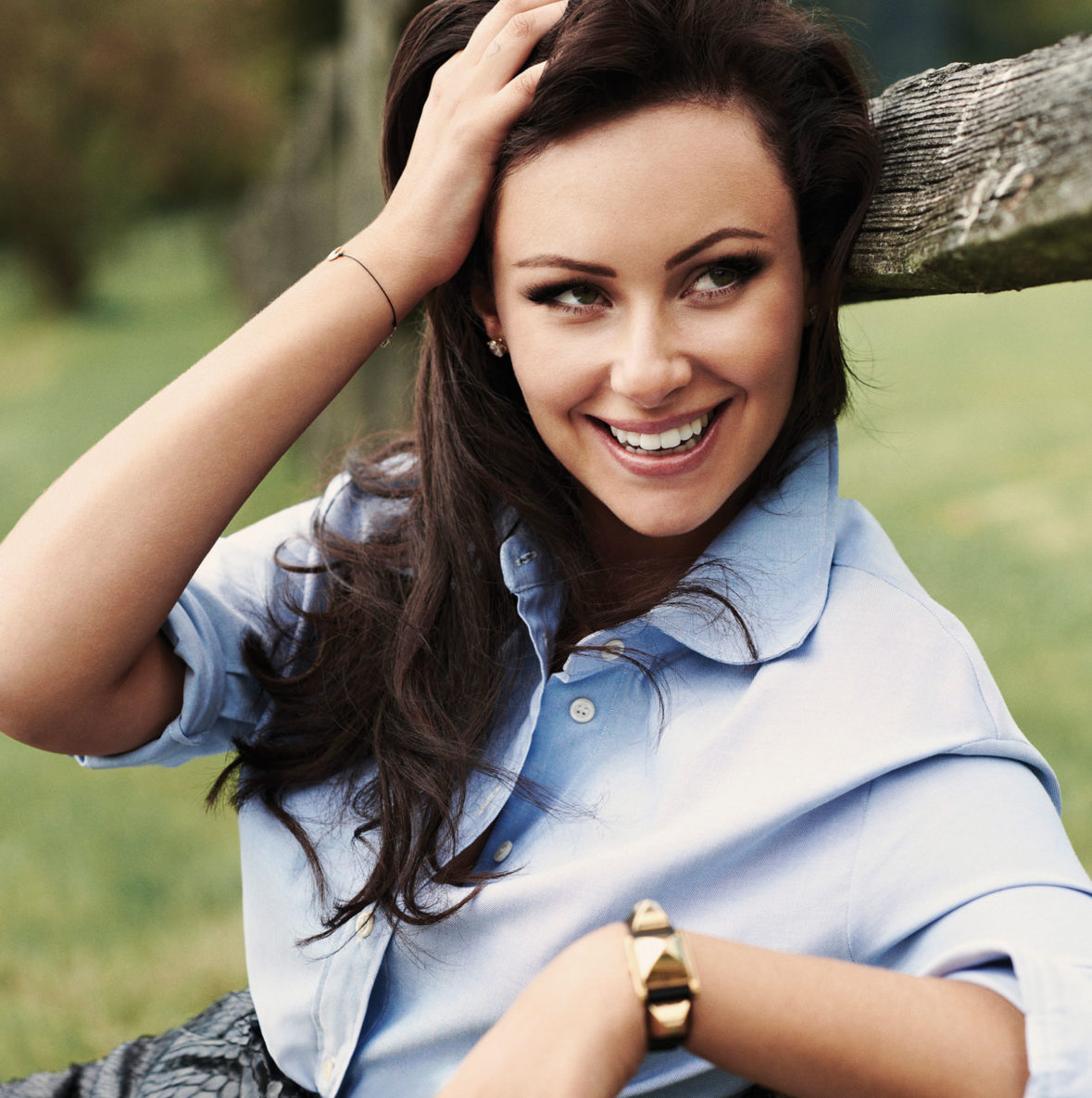 When your father is a self-made billionaire and philanthropist with sharper business acumen at the age 84 than most entrepreneurs half his age, sauntering in his shadow could seem far more attractive a prospect than following valiantly in his footsteps. Camilla Al Fayed, however, begs to differ. At 28 years old, the daughter of Egyptian business tycoon, Mohamed Al Fayed, famed for ascending Harrods and LHotel Ritz to prodigious success, is mixing family legacy with a fitting nod to entrepreneurial independence. While carrying the family mantle with pride through a hands-on role with the Al Fayed Charitable Foundation, the grounded young businesswoman is fashioning her own legacy as chairwoman and 51% shareholder of Brazilian fashion brand, Issa, with ambitions of global proportions.

When Mohamed Al Fayed bought online designer discount store, Cocosa, from Bauer Media in 2010 for an undisclosed sum, it may have seemed the logical opportunity for his business savvy daughter to make her fashion debut. Instead, Camilla Al Fayed opted for the independent route. Hot on her fathers heels, in 2011 she acquired a controlling stake in Issa, a brand known for its vibrant prints and high-profile fans, from the Duchess of Cambridge to pop icon, Madonna. Trusting Founder and Creative Director, Daniella Helayel, to work her artistic magic, the elegant chairwoman today manages Issas commercial expansion with resounding success.

Financial information remains closely guarded, but Al Fayed, one of four children of her entrepreneurial father and Finnish mother, Heini Wathen, provides a glimpse into progress since joining the enterprise. When I acquired the controlling stake of Issa, the business had annualized revenues of circa 5million ($7.57 million); and simply through improving business processes and the way we deal with our customers, that number is now circa 10 million ($15.14 million), shares the businesswoman.

Just 18 months ago, Issa was purely a wholesale distribution business. The brand has since evolved, launching its online store while responding to demand in Japan and Brazil by opening Issas first standalone retail stores this year. Reflecting on the rapid developments setting the brand on course for even greater commercial success, Al Fayed pays tribute to her managerial team that she describes simply, as fantastic.

Angelina Ypma, CEO of Issa London, however, stresses that the chairwoman, who she describes as sharp and supportive, also plays a fundamental role. Camilla is very decisive and has a clear vision for the brand, she asserts. Having approved a three-year plan back in December 2012, Al Fayed is always abreast of progress. We implement our plan while involving Camilla every step of the way, adds Ypma.

Describing her entrance into the sumptuous folds of fashion, Al Fayed, who honed her passion working at Vogue, explains it was love at first sight when she came face-to-face with Issas first collection. But her enthusiasm for the Brazilian brand is matched by a business sense reminiscent of her father. I wouldnt be investing in the sector if I didnt think the underlying fundamentals were solid and likely to deliver an attractive return, she asserts.

The motivation behind Al Fayeds investment was the clear opportunity that the brand presented. Differentiated identity, compelling price point, loyal following and broad appeal count amongst the virtues that she aims to export to the global stage, with signs boding well for consumers in the Arab world. Our next area of focus on the retail side is the Middle East, which I believe will be a very exciting market for us long-term, she enthuses.

In fact, Issa already has a solid foothold in the region. The brand has been supplying renowned department stores and multi-brand boutiques across the GCC and Levant for many seasons now, to great acclaim. Our collection resonates so well with the local and expat consumers, explains the woman charged with taking the brand to the next commercial level.

As a result of Issas Middle Eastern appeal, Al Fayeds company has been approached by several potential franchise partners, eager to open freestanding Issa stores, with one deal already in the bag. We are pleased to say we have chosen a master franchisee that will roll out nine stores for us, starting with Kuwait in November, chimes the chairwoman.

Product diversification is as important as geographical reach. The long-term strategy is to develop Issa from a fundamentally dress-based brand into a truly global lifestyle brand, she remarks. On a medium-term basis, the plan is one of consolidation, as Issa seeks to develop its product lines across childrens wear, accessories and home ware. Upcoming collaborations with high street names such as department store C&A and mid-range fashion outlet, Banana Republic, are also set to strengthen connections with new customers in unchartered territory.

Looking ahead, Al Fayed is keeping one eye firmly on Issa as it grows, while the other scans the horizon for new investment opportunities. My intention is definitely to make further investments in the right businesses at the right time, she explains; like father like daughter.

Today, Camilla Al Fayed, herself a dedicated mother to daughter, Luna, is a thriving businesswoman in her own right. But her fathers influence has not gone unnoticed; unsurprising given his entrepreneurial record that spans more than 55 years (longer if selling homemade lemonade to classmates during his school days in Alexandria counts). While describing her mother (a former model) as her pillar of strength and voice of reason, Al Fayeds flair for business was inherited from the family patriarch. My dad has educated me on how to conduct business, how to make good business decisions, and how to grow and build a brand, she explains. His knowledge is endless and his experience insights have been invaluable.

Mohamed Al Fayed seized his first business opportunity back in 1955 when he set up The General Navigation Company (Genavco) with his brothers Ali and Saleh. He then went on to play a crucial role in Dubais infrastructural overhaul from dry docks, to skyscrapers, to oil exploration.

In the late 70s and 80s, he made his indelible mark on the hospitality and retail landscape, acquiring LHotel Ritz in Paris followed by luxury London department store, Harrods in which he invested more than 400 million (over $605 million) during the first 25 years of his ownership. Though Harrods was sold to Qatar Holdings in 2010 for a reported 1.5 billion ($2.3 billion), Mohamed Al Fayed remains honorary chairman.

Now, with English football and Scottish castles amongst his wide ranging interests which straddle business and pleasure, the veteran entrepreneur continues to form part of the fabric of British society (not to mention its economy) all the while staying true to his Egyptian ties.

Indeed, though born and raised in the UK where her family still resides, Camilla Al Fayed has grown up with a strong sense of identity. I feel very close to my Egyptian roots because of my Fatherhes never lost touch with his culture, even having lived outside of Egypt for so long, she explains.

Like most fathers, Mohamed Al Fayed has been a formative figure in his daughters life. But his influence doesnt stop at family roots or entrepreneurial drive; the Al Fayed Charitable Foundation, established by Camillas father in 1987 with a mandate to improve quality of life for children afflicted by life-threatening illnesses or poverty, has played a big part. I began visiting hospitals and hospices with my dad when I was a teenager. It left a profound effect on me at a young age, encouraging me to assume a more active role as I grew up, she explains.

Camilla Al Fayed is a central figure in the trust, which last year alone donated more than 1 million (over $1.5 million) to childrens causes. Becoming the Foundations Ambassador in 2005, she is now also a patron of many of the charities it supports. Counting amongst the trusts projects are music and arts festival, Lawnfest, that raises money to rebuild the lives of young victims of severe emotional trauma; and funding for the training of a specialist nurse program named the Camilla Nurse dedicated to providing palliative care and holistic support to babies.

These are just a couple of examples of how I hope to continue the legacy my dad started all those years ago, explains Al Fayed. Such is her conviction, if forced to choose between business and charity, the self-assured woman is in no doubt, Charity, as I am lucky enough to be in a position to help make a difference.

For Susie Mathis, Charity Manager at The Al Fayed Charitable Foundation, the trust could not be in better hands, Camilla and her father have a great passion for the care and well-being of children. She has had the best teacher! Proving that her role is far from a simple formality, Mathis adds that the businesswoman-cum-philanthropist enhances any given project with an avalanche of ideas. There is never a dull moment in Camillas presence, she remarks.

Indeed, with a life-changing charitable trust growing from strength to strength and a thriving fashion business set for global stardom, dull and Camilla Al Fayed simply dont fit. As she strides into the future, following not in her fathers shadow, but his triumphant shoes, Al Fayedbusinesswoman, charity trustee and mothershows no sign of forsaking boardroom for opulent indulgence. My focus for 2013 is to carry on taking the Al Fayed Charitable Foundation forward, further the global expansion of Issa, and maybe more childrenwho knows?