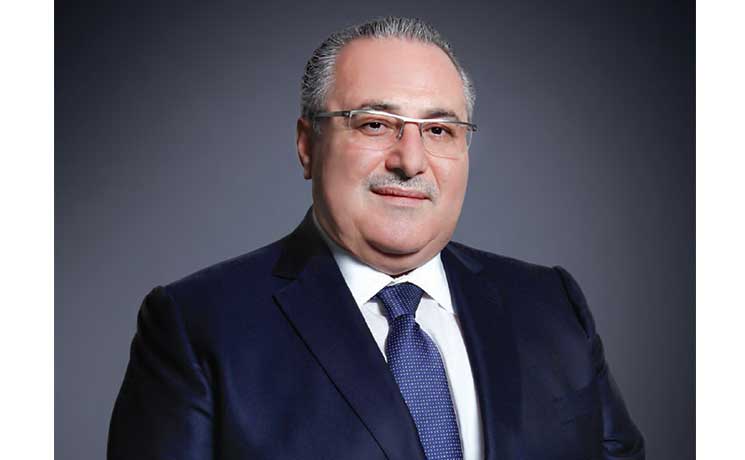 Mohamed Hariri, cousin of the former Lebanese prime minister, is helping the family legacy live on.

Mohammed Hariri remembers the moment he took charge of Lebanon’s BankMed as if it were yesterday. It was in 2005, just after the February 14 assassination of his cousin, former Lebanese prime minister and bank owner, Rafiq Hariri. The country had been plunged into chaos, but Lebanon’s banking sector—and with it, BankMed—stood firm. As aftershocks of detonated explosives reverberated around Beirut, the new chairman was busy securing the bank’s first foreign license in Turkey. A decade on, the trend continues. With ink still drying on a Category-1 license from Dubai International Financial Centre (DIFC)—the first awarded to a MENA bank—Hariri finds himself in familiar territory: embroiled in the throes of regional uncertainty and hungry for growth.

Nestled within the tranquil surroundings of Dubai’s Armani Hotel, it’s easy to forget that not far away conflicts rage and governments teeter on the brink of collapse. But the softly-spoken chairman doesn’t need reminding. He may be in the emirate to celebrate a lustrous license—the most comprehensive granted by the Dubai Financial Services Authority—but every strategic move is determined by the twists and turns of a Lebanon, and a region, that never sleeps.

“At the end of the day, you are part of the environment that you’re in,” says the Beirut-based chairman, his tone, calm and matter of fact. For the bank, which falls under the umbrella of GroupMed—a holding company owned by two of Rafiq Hariri’s sons, Ayman and Saad (42.24% each), and his widow, Nazek Hariri (15.51%)—that environment has grown rapidly in recent years.

Since the shatter of bombs brought his cousin’s tenure at BankMed to a tragic end, Mohammed Hariri has driven branch numbers to 62 inside Lebanon—20 openings in the last five years—as well as expansion into Turkey, Switzerland, Cyprus, Iraq, and now the UAE.

The bank holds an investment banking license in Saudi Arabia, too—a country where the ties run deep. Hariri resided in the Kingdom for 25 years before Beirut beckoned, and still serves as chairman of financial conglomerate, Saudi Oger. And it’s a family affair. In addition to co-owing BankMed, Saad and Ayman Hariri also sit on Saudi Oger’s board, as well as atop fortunes estimated by FORBES at $1.34 billion and $1.12 billion, respectively. Their elder brother, Bahaa, split from the group in 2008 and is reportedly worth around $2.3 billion.

But personal wealth pales next to the $15 billion that BankMed bank racked up in assets last year: a $1.21 billion year-on-year increase and the centerpiece of a balance sheet that boasts loans, deposits and equity all on the up. Meanwhile, though 2014 figures are yet to be released, net profits reached $128 million in 2013, a modest increase on the previous year’s $127 million.

For Hariri, however, talk of numbers misses the point. “You can’t make decisions based on profit,” insists the chairman. “It’s fine and dandy that you buy a bank, but who’s going to run it?” It’s a rhetorical question from a man with experience and a bank which entered Iraq in 2012. The country was in serious need of banking services and several members of BankMed’s Lebanese management, for whom uncertainty was nothing new, were happy to oblige, heading to Iraq to steer operations in uncharted and complex territory.

It was a risk worth taking. During the first year, Hariri says things were “very good” even, “better than expected.” Then again, Islamic State was yet to emerge on the scene. In the year that followed, business was more subdued, given, as the chairman mildly puts it, “the political/security problems they have there.” Still, despite the troubles, the bank now operates three branches in Baghdad, Erbil and Basra.

Entering Iraq at all might be perplexing for some, but Hariri sees a bigger picture. “In order to have Dubai successful, I have to have the clientele to be serviced by Dubai,” he rationalizes. “If I only had Lebanon and came to Dubai, the chance of success would be smaller.” But it’s about more than chances of success; for the chairman, growth is “the only way to survive.”

It’s an assertion that’s hard to refute. In a history that spans 70 years, BankMed has not only endured, but evolved, through war, peace and political crisis, emerging today as one of Lebanon’s fastest growing banks, with a market share of 10%. Now, as DIFC’s golden gates open wide, Hariri is leveraging BankMed’s experience in corporate banking, treasury solutions, trade finance and risk management to his advantage. “I am hoping that in five years from now I’ll be able to double the size of the bank,” he says.

It’s a lofty ambition, but the chief who sits on a seemingly endless stream of company boards—including telecom firms 3C Telecommunications Ltd in South Africa and Turkey’s Ojer Telekomünikasyon—has a strategy to bring the bank full circle, linking BankMed’s existing clients with the Gulf, and the Gulf with them. MedSecurities, one of the bank’s eight subsidiaries, also set up shop in DIFC in February, adding investment services to a Dubai portfolio, which already includes insurance brokerage.

No stranger to the Emirates, Hariri, who also serves as Chairman of Oger Telecom UAE, knows he’s setting foot in an environment rife with competition. But he believes there’s room for one more. “We have a niche market and we’re after SMEs,” he says. “We didn’t come here to be just another bank around the corner. We’re coming with a specific, personalized service, which we think we will be very successful.”

His optimism stems from experience. In partnership with Arab Bank, of which Hariri—once again—is a board member, BankMed acquired Turkland Bank, better known as T-Bank, in 2006, developing a thriving client base of SMEs. Meanwhile, in his Lebanese stronghold, BankMed has long served the potent sector, which, though hard to quantify given varying definitions of what constitutes ‘small’ and ‘medium,’ could account for around 95% of industry, according to the OECD.

That doesn’t mean big firms are off the radar. BankMed, says Hariri, is competing for a share in Lebanon’s “top 50 or 60 corporates.” But the country’s SME appeal is hard to ignore. Not only are they large in number, their default systems are low, with the bank’s provisions at 200% of non-performing loans—an achievement the chairman describes as “remarkable.”

In a promising SME context, Hariri makes something clear: stepping into the UAE does not mean stepping out of Lebanon—a country which he claims to be the home of the world’s strongest banking sector. The sector has, after all, “survived civil wars, Israeli occupation, assassinations and government fall down.”

Nassib Ghobril, Chief Economist and Head of the Economic Research & Analysis Department at Byblos Bank Group, adds weight to Hariri’s claim. The Lebanese banking sector's aggregate assets, says Ghobril, reached $176 billion at the end of January 2015. “This is equivalent to about 370% of GDP, one of the highest ratios in the world,” he affirms. According to the chief economist, private sector deposits are also high—equating to $144 billion, or three times the size of Lebanon’s economy. Meanwhile, the non-performing loans ratio is at less than 3% and banks continue to maintain a high level of liquidity, reflected by a private sector loans to deposits ratio of 35%. In sum, Ghobril describes the banking sector as nothing short of “the cornerstone of economic, public finance and monetary stability.”

But while banking is fundamental in shaping Lebanon’s economy, it doesn’t tell the whole story. Speaking at the Reuters Middle East Investment Summit last October, Riad Salameh, Governor of Lebanon’s Central Bank, announced a much-needed $1 billion stimulus package to boost the economy this year. Despite more than $38 billion in foreign reserves, the Syrian conflict and refugee burden have laid strain on the Lebanese economy. The UNHCR estimates that the small Levantine state currently hosts around 1.2 million Syrian refugees in a context where GDP growth, which stood at 8% in 2010, has remained at or below 2.5% ever since, according to IMF data.

Adding to the bleak picture, Hariri’s praise for his sector’s liquidity is dampened by a muted “adequate” liquidity rating for his bank from Standard & Poor’s, given its ties to the sovereign. On a more positive note, however, S&P points to BankMed’s improving customer franchise, geographic diversification, good management and resilient revenue generation.

Behind its resilience is a solid regulator, which, according to Hariri, ensured that even during the financial crisis, Lebanon “didn’t lose a penny.” His assertion is less than scientific, but for now at least, the country appears to be holding its own, with banks once again, playing a supporting role in a nation where political stability is all but absent.

“A great example is what happened last week in Beirut,” says Hariri, pointing to a recently-issued government bond. “They wanted $500 million initially, and the banks came in with $5 billion.” The development comes against a backdrop of a government in turmoil; parliament having failed for the twentieth time to elect a president. “You see the confidence?” urges the chairman. “This gives you the dynamics between politics and banks.”

And the dynamic isn’t new. After a 15-year civil war which ravaged the country from 1975-1990, Lebanon’s banks, including BankMed, rallied to help with reconstruction efforts, from lending to the government at zero rate to financing infrastructure projects.

Today, conflict rages not in Lebanon, but its Syrian backyard. Still, there’s no room for complacency. From a softly-lit, five-star meeting room in Dubai, Hariri is in town to celebrate BankMed’s entrance into the Emirates, but he knows as well as anyone, that breaking into Dubai’s banking space while driving business from Lebanon to Iraq aren’t tasks for the fainthearted.

With the doors of BankMed’s DIFC branch barely open, Hariri won’t be drawn on how the rest of 2015 will play out. “They’re still trying to get their offices ready, so talk to me in a year!” remarks the chairman with a smile. The same goes for his nation, questions on Lebanon’s future met with amusement. “If I knew that, I would be a very lucky man!” he laughs. Indeed, the year ahead will be telling, but at the helm of a bank that has long thrived in the face of adversity, Mohammed Hariri is up for the challenge—Category-1 license in hand and hungry for growth.