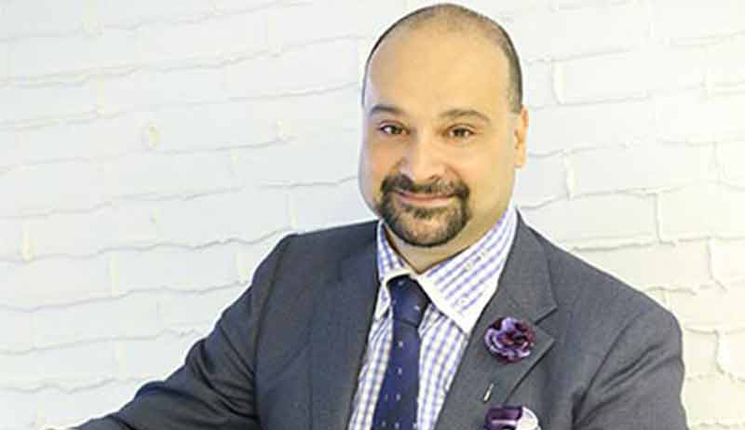 Serge Nalbandian, GM of a family-run carpet enterprise now in its 223rd year, is keeping up with the times.

In one of the oldest districts of Beirut, one of the oldest carpet enterprises is thriving. From his second floor shop on Achrafieh’s Charles Malek Avenue, Serge Nalbandian, General Manager of his namesake family enterprise, is weaving a contemporary future from a rich and colorful past. Paintings that pre-date the camera and framed photographs adorn the walls; sepia tone smiles charting the rise of a company rooted in the bazaars of 18th century Turkey. But while history runs through the veins of the 43-year-old GM, so too does a vision that has kept Nalbandian carpets on floors and on trend since 1792.

“The important thing is always to go with the trend,” asserts the fifth generation Nalbandian front-man, whose ancestors started out in Turkey producing woven horse saddles. After an equine debut—‘nal’, in fact, translates to horseshoe—antique carpets became the mainstay of the business. But times, and tastes, are changing, and Serge Nalbandian, the sole remaining family member at the company, is keeping apace. “The business,” he says, “has completely changed.”

Nalbandian’s words are evidenced in the fabric of his 500-square-meter premises that brims with a kaleidoscope of 1,500 carpets as well as a growing number of collectables from around the world. Antique Persian, Turkish and Caucasian rugs in reds, royal blues and emerald greens pile high, but it is the contemporary creations, designed by Serge’s own artistic hand, that hang proud. Not only do the muted shades of beige and grey appeal to today’s young generation, their pricing is less prohibitive than that of many traditional rugs. “This is $12,000,” says the man of Armenian heritage, gesturing to one of his prime examples. “For an antique carpet in this size, you’d be looking at twice the price.”

The price of modernity, by all accounts, is relatively affordable: good news for customers—and Nalbandian, too, as contemporary carpets all but fly out the doors. And while their antique counterparts might be slower moving, one square meter can fetch as much as $25,000. Antique carpets account for only 10% to 20% of sales, which can range from three per week to 30 in a single transaction, but at that price, the GM is unfazed to say the least by the shift in customer appetite.

While openly discussing prices, the general manager expertly evades questions on his company’s financial standing. Still, with an inventory that stands at an estimated $12 million—much of which is stored in a Swiss appointment-only warehouse—observers can draw their own conclusions. And there’s money still in the pot.

“Our inventory is always increasing, if my wife doesn’t convince me to stop,” smiles the self-confessed shopaholic in a household, which includes his wife and daughters, Kalia and Lilia, aged eight and two. Besides, for Nalbandian, focusing on profit is missing the point. “You cannot do this just for the financial part. For me, carpets are a passion.”

Turning passion to enterprising success, in addition to a collection that spans the traditional, the contemporary and the “transitional”—new carpets based on old designs—bespoke design services add a new string to the Nalbandian bow. Of late, customization has taken him to Kuwait and England for clients in search of the unique.

Interior designer, Aline Koundakjian, has been working with Nalbandian for 16 years, sourcing rugs to furnish houses of all shapes and sizes. “He has a lot of variety for modern and contemporary…so I always find whatever I need,” she explains. “He has his own designs. He’s an artist and a trendsetter, in Lebanon especially,” she adds, confirming that today’s tastes are moving away from antique and towards avant-garde. Antique carpets, says Koundakjian who has her own design firm, no longer fit with today’s home designs.

Nalbandian and his team in Lebanon create the designs, before they are sent to Nepal where the carpets are crafted by Tibetan weavers; a 2.5 by three-meter rug taking up to six months to be completed. The GM turns to Indian, Turkish and Egyptian craftsmanship too, depending on requirements. “What we try to do is find the specific strength in every country and produce exclusive lines,” he says.

But while Nalbandian’s customized carpets, priced between $1,000 and $2,000 per square meter depending on the complexity of the design, are garnering attention, it’s the company’s vintage collection that appeals most. After collecting early twentieth century carpets, the creative GM sets about giving them a facelift; stripping rich colors before re-dyeing them for the modern world. Nalbandian shuns suggestions that it verges on vandalism. “We are giving a second life to things that are not in demand,” he asserts, adding that the vintage collection, named Nebula, or ‘big bang’, isn’t just the most popular; it offers the most value for money. For between $1,000 and $5,000 per sqm, customers, he says, are essentially purchasing an antique.

From vintage to contemporary, Nalbandian’s carpets may be rich in their diversity, but they share one commonality: sales rarely happen in the shop. Instead, customers try before they buy. “We send them all over the world, without commitment,” explains the GM. “One customer selected all this.” He points to a pile of rugs awaiting shipment. Luckily for Nalbandian, trials invariably end in a sale. “I’ve never had a single customer who wanted to return a carpet. On the contrary, I would be very happy to buy back some antique carpets that we have sold!” he laughs.

That’s unlikely. Nalbandian understands better than most the sentimental attachment that compels families to pass cherished rugs down through the generations. And for the man who grew up in the dust of carpets, pinpointing his own favorite is tough. A carefully rolled rug standing upright alongside a bust of his late father, Sarkis Nalbandian, however, certainly counts amongst them. “I’m going to show you an example which is one of just thirteen in the world.” He begins to lovingly unroll the carpet bought by his father in 1970s England for £500. “It’s a small piece but it’s the Picasso of the Caucasian,” he says. Today, the piece is worth $250,000 to $300,000.

Indeed, while everyday tastes are turning contemporary, at the highest levels, appetite for antique remains, as Mary-Jo Otsea, Sotheby’s Specialist in Rugs and Carpets, explains. “Demand for the very best, rarest pieces is stronger than ever. The hottest sector of the market is early, pre-1800 carpets,” she says. A piece known as the Clark sickle-leaf ‘vase’ carpet—a Persian rug from the 1600s—fetched a record-breaking $33,676,000 last year. “This was an extraordinarily beautiful work…prompting collectors and institutions from the Middle East and the West to compete at the auction,” adds Otsea.

Spotting a bargain carpet more than 40 years ago that is now valued at a similar price to the Sotheby’s Persian rug, Nalbandian’s father had an expert eye. Decades on, the Nalbandian protégé has a vision of his own. “The project for 2015 is to have a franchise implemented in all the ME countries, which is going to be called Rugit,” he explains.

The contemporary brand will be sold as a concession within furniture stores across the region and will be stocked with avant-garde carpets and modern home décor accessories. “When you say Nalbandian, people have a tendency to think expensive carpets and antiques, but Rugit is going to be fashion for floors,” he beams.

With plans already in the making, the carpet aficionado is adamant that Rugit will make its debut this year—first in Lebanon, followed by the GCC. Self—yet undisclosed—financing will set the ball rolling, and local partnerships, says Nalbandian, will underpin the brand’s introduction to the Gulf. Stopping short of naming names, he reveals that negotiations are underway with potential partners. “It has to be with people who seriously have a certain standard. We’re not going to do the partnership with IKEA let’s say.”

Nalbandian’s new venture doesn’t only mark the realization of a dream; it’s a sign of how far the company has come. With face-to-face interaction the only way to seal a deal back in the day, his grandfather had been bound to one shop. Next, Serge’s father, himself a pioneer of his time, extended horizons, traveling abroad with photos of his carpets in hand. Today, the Internet has changed all that. “The big plus that I can add on top of all this, is to use technology properly,” says the GM, explaining that people can already customize and order their carpet online. “We can customize things and give the chance to buy from any corner of the planet.”

Nalbandian’s customers aren’t the only ones purchasing from all corners of the globe. Following in the footsteps of his ancestors who moved from Turkey to Persia, and then on to Lebanon, Nalbandian himself takes to the road each month—Pakistan, Turkmenistan, Uzbekistan, India—visiting auctions and his plethora of connections in search of the unexpected: items that extend beyond carpets to the world of art, including Islamic, Ottoman and Christian collectables.

Turkish scissors inlaid with 24-carat gold, jewel-incrusted Indo-Persian daggers and dove-shaped ceramic drinking vessels assume pride of place in a display cabinet. Across the room, an 1895 Islamic text scribed on wood lies in waiting. With a sale price of $22,000 agreed, the artifact is due to be shipped to its new home in Riyadh.

Nalbandian’s eyes light up as he presents each of his money-is-no-object acquisitions. “Today, if I find a collection for $1 million, I’ll buy it!” he enthuses. For some, investing in a pricy inventory at whim is risky business, but not for this collector. “To tell you frankly, I have never purchased a single piece in my life by thinking that I might sell it to a particular customer here or there.”

As he speaks, one thing is clear: for Serge Nalbandian, it’s pleasure, not business, that dictates his work—a key to success for the enterprise steeped not only in history, but pioneering foresight. And while the fifth generation entrepreneur counts as the sole family member steering the business today, something tells us he won’t be the last.

As Nalbandian goes about his work, two young girls aged eight and two can be often found atop luxurious rugs, pencils in hand, contentedly sketching designs inspired by the woven wonders beneath their small feet. “My father used to tell me ‘you know what my son, you’re going to be much stronger than I am,’” recalls Nalbandian. “And I’m sure my daughters are going to be much better than me.”