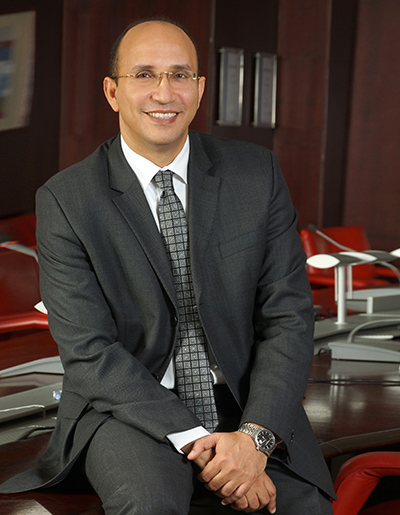 At the end of a long day’s work as chief executive of Orascom Telecom Holding (OTH), Ahmed Abou Doma likes nothing more than to unwind with a game of chess. He is a strategic man; contemplating tactical moves and preempting those of his opponent, Abou Doma’s chess tactics reflect his approach to running the third largest company on the Egyptian Stock Exchange. “I love playing chess…in a way I feel it’s business,” beams the CEO. Launching Egypt’s first mobile operator, Mobinil in 1998, Abou Doma’s company was a telecommunications game changer in the MENA region. Today, OTH’s strategic thinker is making headway in other markets, striking a balance between cost efficiency and technological innovation in some of the lowest income countries in the world. Even in Algeria where an ongoing dispute has restricted play, the telecoms powerhouse dominates its markets, with a financial performance to match.

In 2011 Abou Doma led OTH to a lucrative year, with net profits reaching $651 million compared to $144 million in 2010, and revenues of $3,636 million up from $3,565 million the previous year. OTH’s total assets, however, witnessed a drop to $7,955 million from $9,980 million twelve months before. Accounting for this decline, Abou Doma cites the sale of his company’s 50% share in wireless network operator Tunisiana to its Qatari partner in the country, Qtel. “We exit and we got $1.2 billion I think at that time,” recalls Abou Doma. But in a capital-intensive industry, the telecoms expert views increases in earnings before interest, tax, depreciation and amortization (EBITDA) as the most impressive financial indicator. “Let me tell you, very rarely would you find mobile operator results in the high forties like us. We were at 50.5% EBITDA margin during Q2 2012,” he asserts.

Though Abou Doma’s holding company, which is also listed on the London Stock Exchange, enjoyed financial success in 2011, eyes remain on Algeria as it continues to hold Orascom Telecom under operational siege. Back in 2009, the Algerian state alleged that OTH’s subsidiary, Orascom Telecom Algerie (Djezzy), had committed foreign exchange violations worth around $186 million between 2007 and 2009. A hefty $1.3 billion fine was subsequently imposed on the company, catalyzing OTH’s move to sell its Algerian subsidiary. However, the Algerian state exercised the right of first refusal, rejecting a potential deal with a South African operator while refusing to match the offer. “On their ground, and on this issue specifically, I do not believe they are playing fair,” asserts Wael Ziada, Head of Research at EFG-Hermes.

Amidst the ongoing feud, speculation increases over OTH’s ability to sustain the network which serves 17.7 million subscribers, representing 57.5% of Algeria’s mobile subscribers. Ziada explains that average capital expenditure-to-revenue ratios stand at between 12% and 18% in MENA and other emerging markets as companies invest in vital network improvements. By comparison, OTH’s ratio in Algeria stood at just 2% last year given the ongoing ban on foreign currency transfers and its inability to import equipment. But Abou Doma remains defiant, “We are still leading the pack by a far distance despite the ban that has been imposed on us for two years-and-a-half.”

Managing to increase revenues and subscriber base in challenging operating conditions, Ziada describes OTH’s achievements as “an engineering miracle.” He explains, “To my mind, if you continue to work with a cap-ex spending of 2% per year, you’ve tried everything.” But the EFG-Hermes expert warns, “With this kind of spending the company is running the risk of encountering significant network problems.”

Low investment in a telecoms network poses serious implications for quality, with the risk of black-outs that could take days, weeks or even months to repair. “It’s going to be tough moving forward because they’ve reached their limit. If they want to grow they have to spend, but Algeria won’t allow them,” explains Ramzi Sidani, associate at Shuaa Asset Management. “We’re going to see stagnant growth in Algeria,” he adds. Sticking to the official line, OTH’s stoic CEO explains that negotiations are underway between Russian telecoms company VimpelCom (the major stakeholder in OTH) and the Algerian government. “I think this [negotiation] will progress positively…While we have filed an international arbitration against the tribunals, we would support any amicable resolution,” he remarks.

The outcome in Algeria may be unclear, but the chess aficionado remains unfazed as his strategies in other corners of the world bear fruit. OTH no longer has operating companies in Egypt having exited Mobinil last year, but the company’s HQ remains rooted in Cairo. Moreover, the telecoms precedent set and experience gained in Egypt are not lost, “The skills and understanding we developed in Egypt, which itself is an emerging market, has helped us a lot,” states Abou Doma.

As a leader within an industry that has grown leaps and bounds in sophistication and penetration—even playing a role in toppling a regime—the CEO is proud of OTH’s Egyptian accomplishments. Today, the telecoms veteran believes his country has new spirit, “I look at Egypt ten years from now and I’m confident it’s going to be the Egypt we all hoped for.

Abou Doma’s pride is justified, but OTH’s successful history is owed in large part to Egyptian telecoms magnate, Naguib Onsi Sawiris. The businessman, who joined Orascom in 1979 before turning to politics in May 2011, was instrumental in building the Orascom empire and chaired OTH until selling his family’s stake to VimpelCom in a $6.5 billion deal last year.

Sawiris’ influence may have faded, but his legacy of venturing into frontier markets with strong potential remains intact. With this legacy at OTH’s strategic core, Abou Doma rejects the suggestion that his company’s timely exit from Egypt last year was instigated by political unrest. “Always, Oracom Telecom’s strategy was to go for the blue ocean approach—go to markets where there is less competition and high population...and develop the market fairly quickly,” he explains.

In Pakistan and Bangladesh, where OTH’s operators rank first and second in their respective markets, Abou Doma is doing just that, with “mega projects” as he terms them, underway in both countries. Not a man to do things by halves, the CEO is finalizing an eleven-month process of swapping his company’s entire Mobilink network in Pakistan which serves around 36 million subscribers, essentially rolling it out from scratch and preparing to welcome 3G.

Turning ambitions into reality, OTH is thriving in two of the lowest income countries in the world, which also happen to be home to the lowest per minute rates. Expertly handling a market in which some customers can spare just $2 per month on their telecom needs, Abou Doma explains that the secret of his success lays in mastering emerging market dynamics and working from experience rather than strictly by the book.

Looking ahead, the CEO expects a busy year in his existing markets which also include the Central African Republic, Zimbabwe, Burundi and Canada, and hopes to carry out essential modernization of his Algerian network if and when the ban is lifted. But the cause of most excitement for the chief executive is the wealth of data opportunities that lay at his doorstep. Though 3G is yet to be launched in Algeria, Pakistan and Bangladesh, Abou Doma describes a “strange coincidence” as all three expect to gain 3G licenses next year. “Can you imagine what it means to have 3G services launched in countries that have very high and very young populations?” he asks.

Besides the obvious demographic advantages, the internet story in these emerging markets is set to be a mobile one, with no fixed line competition which typically serves as a headache for mobile operators. “This is a huge opportunity to see mobile, broadband and all 3G applications taking place and we have very fertile soil for those three countries,” remarks Abou Doma. But realization of such ambitions is not easy, with the cash requirements for licenses and network roll-out posing significant obstacles. “3G doesn’t come without a cost,” asserts the CEO.

Raising awareness is an important yet apparently lesser challenge, as emerging market customers appear not only ready, but hungry for 3G. On a trip to Algeria, Abou Doma recalls that sitting in a hotel lobby he was struck by the number of people around him fixated on laptop screens. His colleague explained that in the absence of fixed broadband in homes, people turn to hotels for internet access. Surprised by this reality, OTH’s leading man explains “This is a very expensive thing to do…so imagine how much pent up demand there is in this country.”

Indeed, despite troubles in the Algerian market, potential remains. With a strategic eye, Abou Doma is striding into a mobile future, taking a world of emerging markets with him. Sharing his wisdom for success at the top, he explains, “You have to inspire, have a vision, know where you’re taking your organization, and leave the operational details to those who can do it better than you.” So far, Ahmed Abou Doma appears to be taking his own advice.