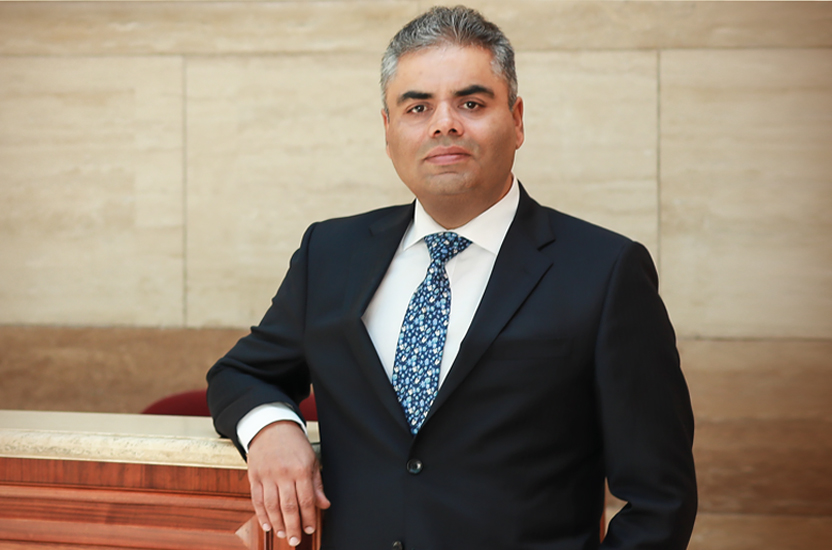 Earlier this year, as India excitedly prepared  for its general elections that could set the tone for investors eyeing the market, alternative investment firm Investcorp made headlines. The Bahrain-based firm had acquired IDFC, a private equity business in India, and announced it would invest $1.5 billion into the subcontinent over the next five to seven years—it was the first time that the 37-year-old company had ever forayed into India. For Rishi Kapoor, Investcorp’s Co-CEO and a 27-year veteran of the firm, it was anything but an impulse decision.

A little more than a year before, he and another Co-CEO, Hazem Ben-Gacem, along with Investcorp’s Executive Chairman, Mohammed Alardhi, had toured both India and China, spending a week in each to fully understand their dynamics. Till then, the firm had little exposure to these markets. But things have changed since Kapoor, 53, took charge as Co-CEO in 2015—a move that has propelled him to the eighth spot in Forbes Middle East’s ranking of Top Indian Executives Making An Impact In the Middle East 2019. At Investcorp, he is now actioning a shift that has seen the firm looking east.

Founded by ex-Chase Manhattan banker Nemir Kirdar in 1982, Investcorp has carried out more than 185 investments across geographies as diverse as the U.S., Europe, the Middle East and North Africa with a total value in excess of $59 billion. Its tactical investments have so far helped it record healthy returns. Investcorp saw its profit in the financial year of 2018 swell by 4% to a handsome $125 million from $120 million. Such numbers have also helped the company attract star investors to its fold.

In 2016, Abu Dhabi’s Mubadala Development Company said it would take a 9.99% stake in Investcorp and another 10.01% upon clearing regulatory approvals, bringing its total shareholding to 20% within the firm. Today, it is one of the biggest shareholders of Investcorp.

It is partly thanks to Kapoor and his colleagues that Investcorp—a company with assets worth $22.5 billion by the end of 2018— seems to be forging ahead today. An ex-Citi banker, Kapoor joined Investcorp in 1992 when the 10-year-old firm managed assets valued between $2 billion and $3 billion and subsequently worked his way up the ranks. In 2017, Kirdar stepped down from his role as chairman of the board of directors and left Kapoor and another colleague Mohammed Al-Shroogi (who was then the Co-CEO) in charge of operations. Both reported to Alardhi, a long-time board member of Investcorp, who heads the company today as the executive chairman.

Kapoor has made some big changes since. Once heavily focused on developed markets with higher yields such as the U.S. and Europe, the Co-CEO is now leading Investcorp to take baby steps in India and China—growth markets that were previously not on the company’s radar. The move came as Asia gained more prominence over the last two decades, with economic growth in China alone averaging 9.5% in that time, according to OECD.

“Over the last 40 years of our existence, Asia has gained significantly in terms of prominence on the global economic map,” allows Kapoor. “50% of growth in past years has been coming from Asia.”

With sights firmly colleagues have been hard at work, hunting for set on Asia, Kapoor and his
deals while assessing the economic scenario in the two largest markets in Asia: India and
China. He, Ben-Gacem (who succeeded Al Shroogi in 2018) and Alardhi, met with a cross section of investors, policy makers, business people, consultants and advisors to understand the markets. After an in-depth study, Kapoor understood that Investcorp would need to either have a physical presence within the two countries or forge strong partnerships to draw its full potential. “Local experience, local knowledge, local networks, relationships and connectivity were essential,” he explains.

In February 2019, Investcorp India Asset Managers— with assets worth $450 million—opened its doors. It was the firm’s second office in Asia (its first office was in Singapore). In India, Kapoor says he is looking to tap into the country’s massive middle class and youthful population who have a propensity to spend.

If grassroots consumption is Investcorp’s focus in India, the company is zeroing in on China’s potential to produce profitable technology firms. With an eye on the country’s booming tech sector, Investcorp began investing in China after it committed close to $250 million in China Everbright Limited, a sovereign-backed cross-border asset manager listed on the Hong Kong Exchange. Kapoor says that the company has already completed eight investments in tech companies since its entry to the market in 2018.

However, the principle behind investing in both countries are the same: the scale of consumption “Our strong conviction is that the whole domestic Chinese-led consumption tech-space is very attractive.”

While its shift to include Asia could be a winning move, Kapoor says that the renewed strategy has had to be accompanied by a mindset change across the company. Previously a heavy investor across developed markets like the U.S. and Europe, the Investcorp team had to condition themselves to accept that Asia was going to receive a chunk of their future investments.

Under Kapoor and Ben-Gacem, a change in geographic focus is not the only thing afoot at Investcorp. Earlier this year, the company partnered with asset manager, Aberdeen Standard Investments, to create a $1 billion GCC infrastructure fund, a relatively new area for Investcorp. The firm had already proven itself in alternative asset classes such as private equity, real estate and liquid alternatives. So, it was only natural that the investment firm tap into credit, infrastructure and strategic capital, enthuses Kapoor.

Kapoor and his team’s strategy has definitely borne fruit for their investors.

“In terms of its performance with respect to its global peers, Investcorp provides a return on assets and equity, which is higher than that of the sector median,” notes M.R. Raghu, EVP, Head of Research, Kuwait Financial Center ‘Markaz’, an investment firm. “The company’s share price has seen a five-year compound annual growth rate (CAGR) of 7.5% from 2014-18, outperforming the Bahrain all share index, which returned a CAGR of only 1.4% to the investors.”

Timely exits from certain deals have also helped Investcorp to keep up its financial performance and entice investors. According to Raghu, Investcorp made profitable exits through its sale of Gulf Cryo, and the IPO of Leejam in Saudi Arabia.

Investcorp, though, can draw on a wealth of experience in markets like the U.S. that saw some of the biggest deal makers historically jockey for the right opportunities. Under its founder Kirdar, the Middle East’s oldest investment firm started out by investing the proceeds from wealthy Gulf-based businessmen and family offices into profitable businesses in the west.

Armed with a full purse and under Kirdar’s stewardship, the company gradually built its presence in the West, including in markets such as the U.S. and Europe. Investcorp catapulted into the limelight in the mid-eighties for acquiring stakes in companies such as Tiffany & Co and Gucci and later taking them public.

Kapoor and his team plan to continue this legacy while notching up Investcorp’s performance. The Manama-listed firm is aiming to double assets under management to $50 billion over the next three years—an ambitious roadmap in an economic environment that is constantly challenged by headwinds. But with more than two decades to his credit at Investcorp, Kapoor might be just the man for the job.

During his career at Investcorp, CEO has earned a reputation for being both a deal maker and a skillful orator. His ex-colleague and current Co-CEO Ben-Gacem’s predecessor, Al-Shroogi says it is rare to have a professional with both oratory and analytical skills.

“Rishi has a tremendous problemsolving ability, better than anyone I have met,” says Al Shroogi, who has since retired from Investcorp. “He remembers small details, facts, figures, from several years and is able to leverage this for a creative solution, if required.” His current Co-CEO Ben-Gacem also speaks of the executive’s eye for detail, especially when scouting for deals worldwide. “He has the foresight and astuteness in seeking global opportunities and assessing macro trends,” says Ben-Gacem. “Those qualities are important in our business.”

Kapoor’s analytical skills could be partly due to his education as an engineer. The executive graduated with a degree in electrical and computer engineering from the prestigious Indian Institute of Technology. His induction into the world of finance came when he was chosen by Citi through campus recruitment to join its team. A short stint in bank’s Europe offices later taught him the ground lessons, but Kapoor credits his storied career to his roots as an engineer. “Engineering teaches you problem identification, but more importantly problem solving. And problem solving really is the core competence that we’re able to bring to the table.”

After securing both India and China, Kapoor is now assessing opportunities in other Asian markets, particularly in Japan. “Over the last several years, Japan is increasingly showing up on our radar as an attractive market for us on two fronts, one is the market for us to invest into potentially, either around private equity or real estate or both,” says Kapoor.

While Japan is not entirely new to Investcorp (the company has previously had Japanese clients investing across its credit products), Kapoor thinks there is still substantial opportunity there for the company. Meanwhile, it is continuing to be active in markets like the U.S. and Europe.

In June, Investcorp carried out its largest real estate investment in a decade in the U.S. by buying 11 properties across some key cities for $370 million. Markaz’s Raghu explains that such tactical investments have helped it diversify.

“It also made some significant real estate investments in the U.S. industrial and logistics sector to take advantage of the boom in online retail business as well as in Germany to offset negative implications of the potential Brexit.”

But for now, the executive has his hands full rolling out Investcorp’s business in India and other markets. Now a few months on, Kapoor says that the company has had “a great start” in India. A new government, with the same prime minister, has swept to power in the world’s largest democracy—considered a sign of stability among foreign investors.

Meanwhile, Kapoor is already charting his next course for Investcorp and its clients that meanders throughout the world. The firm has just picked up an industrial property in Hamburg, bringing the value of Investcorp’s real estate assets in Europe to €500 million ($569 million). It’s one more investment to add to the pile for this CEO.