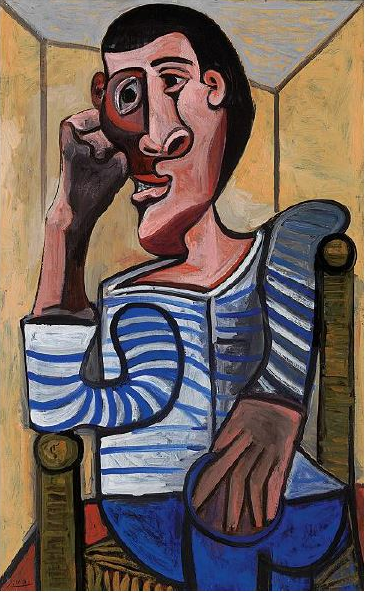 Le Marin, a rare oil-on-canvas masterpiece by Pablo Picasso, will be sold at auction at Christie’s New York on May 15. Estimated to fetch $70 million, the painting is one of the artist’s most celebrated self-portraits, in which he wears one of his famous striped fisherman’s jerseys.

Picasso created the oil-painting during the Nazi occupation of France. It portrays the Spanish artist’s distress and anxiety when five weeks previously, in September 1943, he received a letter from Nazis threatening to deport him to a concentration camp.

The self-portrait was once owned by art-aficionado couple Victor and Sally Ganz—known for their 20th century art collections. They bought the painting in 1952 for $11,000 from Harry Abrams, an American publisher of art and illustrated books. The couple also owned Les Femmes d'Alger (Version 'O’) by Picasso, which became the most expensive work of art ever sold at Christie’s New York when it fetched $179.4 million in May 2015.

More recently, on March 23, 2018, Christie’s Dubai sold a Patek Philippe 1518 watch, commissioned in 1945 by King Farouk of Egypt, for a record-breaking $912,500—the most a watch has ever been sold for in the Middle East. At the same auction a custom-made waterproof Rolex GMT-Master watch owned by Sheikh Mohammed Bin Rashid Al Maktoum, Vice President and Prime Minister of the U.A.E. and Ruler of Dubai, was sold for $162,500.

Christie’s has sold $6.6 billion worth of artworks in the last year.