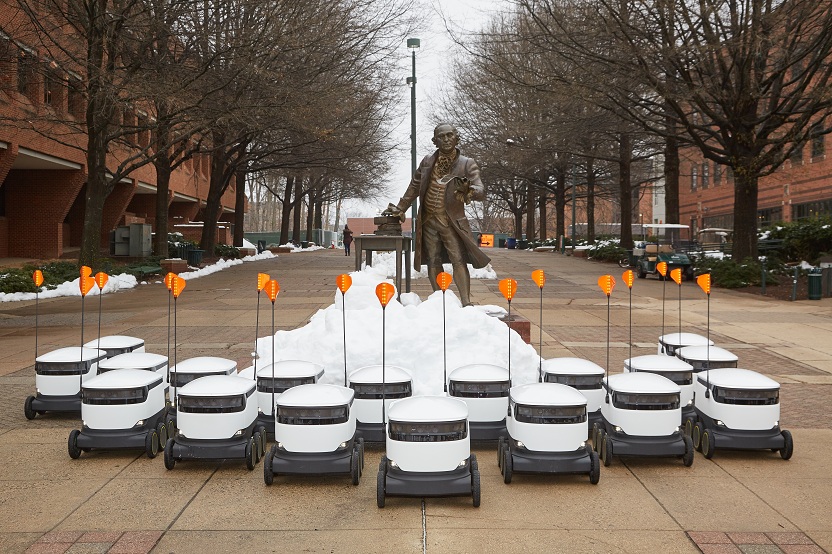 Students at George Mason University and Northern Arizona University have been getting food delivered by robot since the beginning of the year. Now, in a major expansion of robotic food-delivery, the company behind those robots, Starship Technologies, said that it had raised $40 million led by Morpheus Ventures to expand its service to 100 college campuses.

The San Francisco-based company, whose total funding is now $85 million, rolled out its cooler-size robots at University of Pittsburgh today and announced plans to launch at Purdue University after Labor Day. Starship CEO Lex Bayer told Forbes that Starship would add several new universities each month, at an accelerating pace, until it hit the 100 mark in 2021. “It doesn't make sense for a person in a two-ton vehicle to deliver a burrito to me,” he says.

Robotic delivery has been a hot area of late. Food delivery company Postmates debuted the Serve, a yellow, black and white robot with large black eyes, last December. Other companies that have developed delivery robots include Nuro, Kiwibot and Marble.

Skype cofounders Ahti Heinla and Janus Friis launched Starship in 2014. Bayer, 41, a former executive at Airbnb and native of South Africa, joined as CEO last year, replacing Heinla in that role. Both founders remain at the company: Heinla now manages the autonomous driving team, while Friis works on product design and branding, according to Bayer.
For the first four years, the Starship team developed its autonomous driving technology, which is, in smaller version, similar to that of self-driving cars. The food delivery robots use sensors, cameras and radar to navigate the streets; artificial intelligence and premapped locations help the bots to know where they are. A command-and-control center in Washington, D.C., monitors the robots and can step in if one runs into trouble, for example if it gets stuck at a construction site.
Starship has focused on college campuses, where demand for food deliveries is high and students have few qualms about getting delivery of late-night snacks by robot. Starship has worked in partnership with hospitality giant Sodexo and has delivered food from local restaurants like Einstein Bros. Bagels, Blaze Pizza and Dunkin’ Donuts. The cost for food delivery is a flat fee of $1.99.
Its robots operate from early morning till late at night, rain or shine, traveling at a maximum speed of 4 miles per hour, a fast walking pace designed not to scare people on the streets. “By design, they are unintimidating. They are smart and cute and polite,” Bayer says.

Starship currently has 250 robots on the streets, and each new college that signs up will add another 25 to 50 robots, Bayer says. He expects that Starship’s fleet will total 500 to 1,000 robots by year-end.

Starship said that it has completed 100,000 deliveries with its robots since launch and traveled 350,000 miles, a figure that Bayer says makes it “literally miles and miles ahead” of the competition. In addition to its deliveries on American college campuses, Starship’s robots have been delivering groceries in England. But the biggest growth, for now, is on campus. “The universities are pulling us forward,” Bayer says.