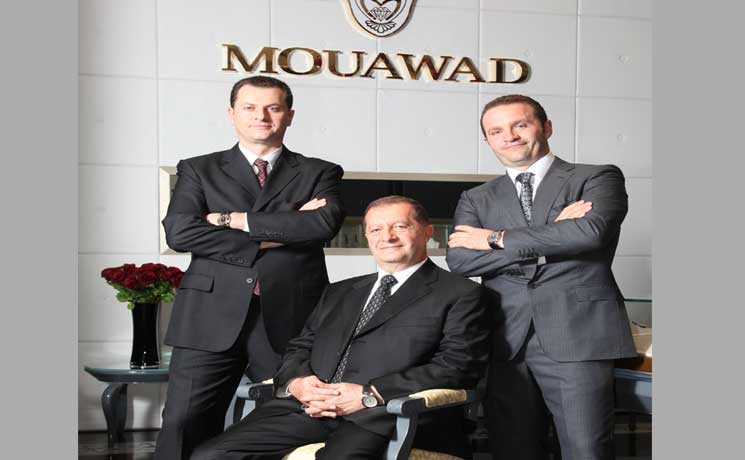 With three sons and new ventures that tie carats with construction, Robert Mouawad is leading a legacy.

There aren’t many family businesses out there with a Guinness World Record to their name. That’s what makes the four held by Robert Mouawad and sons Fred, Alain and Pascal, all the more impressive. L'Incomparable Diamond Necklace, the most expensive in the world at a dazzling $55 million, is the latest in a superlative, lineup that boasts the most valuable handbag—a comparative steal at $3 million—$11 million bejeweled lingerie ‘à la Victoria’s Secret,’ and a $12.8 million pear-shaped diamond. But there’s more to the dynasty of Lebanese jewelers than headline-grabbing objects d’art, and nothing is more telling than the titles its leadership carries. Forget designations that profess ownership, the Mouawads are self-appointed “guardians” of a 125-year-old family treasury.

Far from a marketing ploy, Robert Mouawad, whose personal wealth stands at an estimated $1.45 billion, doesn’t use the term lightly. His private company, which designs, manufactures and sells its own jewelry and watch collections, is building on four generations of success, and for the third gen custodian, sharing and safeguarding it are part and parcel of the responsibility bestowed on any self-respecting guardian. “I believe it is very important to preserve a legacy for future generations,” says the man whose namesake Robert Mouawad Museum in Beirut goes some way in doing just that.

The museum-quality legacy began with Mouawad’s intrepid grandfather, David, who left Lebanon and honed skills as a jeweler, watchmaker and goldsmith overseas, before returning home and setting the creation of an empire in motion. Since then, the family saga has evolved with every fresh face to enter the folds.

“Each generation brought something unique to the Mouawad legacy and shaped the company with their vision,” says the current patriarch, who formally took a step back from day-to-day operations in 2010. He won’t be drawn on how that shaping translates to company profits, but with single sales of L'Incomparable Diamond stature, it’s safe to assume the Mouawads are faring rather well.

Where vision is concerned, the man touted as the world’s biggest diamond collector—a title he neither denies nor confirms—is more forthcoming. While he may have entrusted the mantle he inherited from his father, Fayez, to his own brood of co-guardians, the direction of the business magnate still boasts as much clarity as the diamonds he collects.

Just as Mouawad’s father was responsible for adding the jewelry dimension to a company then of watchmaking fame, taking the company global has been Mouawad’s third-generation signature—and one that remains indelible as the company speeds into the fourth.

From 19 company-owned boutiques in Lebanon, the GCC and Asia; to the decision to move the headquarters to Geneva and branch out across Europe; the brand has developed international and star-studded reach—and a 3,700-strong team to maintain it. Singers, socialites and icons of the silver screen have all graced the red carpet, bedecked in Mouawad masterpieces, with Elizabeth Taylor, Jennifer Lopez and Nicole Kidman counting amongst the diamond encrusted A-list.

Such celebrity status comes as little surprise for a company that Mouawad Senior claims is the only jeweler in the Middle East that manufactures fine objects d’art. “We are often commissioned by VVIP clients to create bespoke pieces,” he says, adding that on various occasions, his team has been tasked with adorning the walls and ceilings of royal palaces with gems and precious metals. He mentions no names, but with the GCC counting as his biggest market, and one where “custom pieces are very in demand” and “clients favor something out of the ordinary, bold or ornate,” there are no prizes for guessing.

By contrast, Mouawad describes his own taste—and one reflected in his private collection—as understated elegance. He struggles, however, to pick a favorite stone—each of their fascinating personal histories, making it a near impossible task. Failing to reach a verdict, he concludes that whatever the diamond, as the fortunate heirs, his co-guardian sons will be the first to know.

Of course, the rest of us can only dream of taking custody of a multi-million-dollar gem, and palaces lined in precious stones are the reserve of the few. Still, industry statistics indicate that, within their own limits, consumers have developed a taste for the finer things in life.

The World Diamond Council states that global diamond jewelry sales have increased three-fold over the past 25 years and are now worth in excess of $72 billion annually. “In many cultures diamonds are considered to be the ultimate jewel,” asserts the organization; not least given that they were born at the beginning of time—3.5 billion years ago according to scientific estimates—and will last for eternity.

Euromonitor International, meanwhile, estimates that the retail value of the luxury jewelry market at large in the Middle East and Africa (MEA) reached almost $1.41 billion in 2014, a figure which is expected to rise to $1.52 billion this year and $1.65 billion in 2016. The bulk of the billion-dollar-plus MEA market is driven by women’s luxury jewelry; valued at an estimated $1.14 billion this year, compared to just $378 million for men’s.

Mouawad’s personal habits reflect the regional trend. By his own admissions, the women in his life have frequently been on the receiving end of a jewel or two. “Certainly over the years there have been many gifts to them involving diamonds,” he says. As for himself, Mouawad steers clear: “Having a stylish and impeccable watch on my wrist,” insists the man who designed his own Robergé collection, “is the only adornment I need.”

His penchant for watches is a natural extension of the Mouawad horologic heritage, but the man with entrepreneurial flair has a passion for something else—a passion that has resulted in an altogether different venture that occupies much of his time today: real estate.

For the jewelry giant, it’s an unlikely pairing, but Mouawad, contends that there’s a certain synergy between the two. Both, he says, involve the creation of a work of art in the hands of skilled craftsmen. “I have an eye for the exquisite and this does not stop at jewelry,” asserts the savvy businessman. His portfolio at a glance includes luxury hotels and resorts in the Arabian Gulf and Levant as well as prestigious properties in some of Europe’s most exclusive destinations.

Those seeking more details, however, are left wanting—Mouawad, reluctant to divulge too much, adds only that the unifying theme across his portfolio of properties is a visionary approach to beauty and luxury. Even access to his real estate website pages require secure login—the guardian of the gate proves formidable.

But there is one project that he’s keen to discuss. “I allocate a good amount of my time to Reef Island,” he says. The man-made island located in Manama is a high-end residential and hospitality complex developed by the Lulu Tourism Company—the result of a joint venture established in 2002 between the Government of Bahrain and the business mogul’s real estate wing, Mouawad Group Inc. And it’s more than a business endeavor.

Managing Reef Island, he says, is his greatest pleasure these days. There, he also enjoys his own seafront property where he hosts his sons, grandchildren and friends. The same enthusiasm goes for Mouawad’s other real estate projects, too—anything less would be inconceivable. “I can’t imagine any business venture not being a passion: it is what drives one to succeed,” he says.

Mouawad’s love for his work is just one of many traits passed on from his father. “I believe he taught me to be discreet, diplomatic, down to earth…but also proud of my roots, and to have an appreciation for true art and for the exquisite,” says the third generation custodian who started out studying medicine before joining the family business. And in return, he is continuing the legacy. “I like to think that the lessons my children have learned from me relate to aiming high in life, pursuing their dreams and goals relentlessly, while valuing family," he remarks.

But even for the man who claims working with family is always a blessing—never a curse—the question of succession hasn’t been simple. “I admit that it wasn’t the easiest thing I have done—to step back and relinquish my involvement in what has been my passion for most of my life,” he explains. “However, I was also proud to see the Mouawad legacy continue—for it to enter a new era.”

As that new era unfolds, Fred, Alain and Pascal now occupy the driving seat of the 125-year-old dynasty, but their father’s vision remains crystal clear. The strategy for the year ahead, says Mouawad, will be one of cautious growth amid economic uncertainty, but his expansionary ambitions and drive to craft the exceptional remain steadfast—ambitions that a new generation is carrying with pride as three young co-guardians add their own chapter to the tale. But that doesn’t mean that Robert Mouawad has lost his sparkle. Day-to-day operations might have been exchanged for quality time with his grandkids, but as he puts it, “A true collector never stops.”