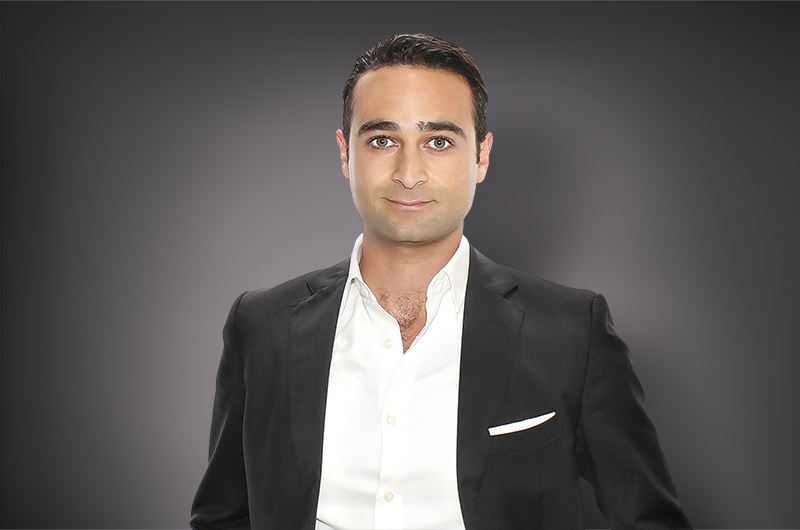 Geothermal energy for MENA and land rights for Palestinians: all in a day's work for UCI's Khaled Al Sabawi.

Life in Palestine can be tough. Even when the bombs fall silent, the bureaucratic brick wall that is the Palestinian Authority vies with a barrier of another kind—this time of cold Israeli concrete—a constant reminder, should residents need one, of the occupation weighing heavy on their shoulders. Resistance infiltrates every layer of daily life, and as it does, basic human needs face a struggle of their own; a reality that Khaled Al Sabawi knows only too well. A son of Palestinian refugees, the 31-year-old general manager of one of Palestine’s largest construction companies, Union Construction and Investment (UCI), is out to build the future—quite literally—for his ancestral homeland.

Through UCI subsidiary, MENA Geothermal, Canada-born Al Sabawi is infusing fertile land with green energy while returning it to Palestinian hands through TABO, an ambitious UCI initiative that secures title deeds for those who need them most. To say that he has his work cut out is an understatement, but lesson number one for children of the occupied territories is that nothing worth having comes easy.

It was in 2007 that Al Sabawi’s entrepreneurial journey—challenges and all—began. Arriving at UCI’s Ramallah HQ, the company founded by his father, Mohamed Al Sabawi, in 2005 and listed on the Palestinian Stock Exchange with 2013 revenues of almost $2.5 million, the budding entrepreneur came face-to-face with inescapable realities that would lead him, first, down the geothermal path.

In addition to one of the world’s fastest-growing populations—UNDP estimates that by 2050, population per square kilometer will exceed that of Bangladesh—Palestine is home to some of the highest energy prices in the region, with a supply reliant on the Israeli occupation: a recipe for an energy crisis if ever there was one. “You can’t have a growing population, no sources of energy and very high energy prices,” urges Al Sabawi.

For MENA Geothermal’s founder-president, the answer was sustainable development fueled by renewable energy. And the need for sustainability reaches beyond Palestinian borders. “The MENA region’s energy intensity (total energy consumption/GDP) is about 40% higher than the world average,” stresses Al Sabawi who also serves as UCI’s vice-chairman of the board.

Spurred by realities on the ground, the engineer-entrepreneur launched MENA Geothermal in 2008, and with it, the region’s first geothermal system in Palestinian residential complex, Etihad Villas. Seven years on, the energetic enterprise, part-owned by Al Sabawi alongside UCI and his family’s Ahlia Insurance Company, is equipping commercial and residential buildings with heating and cooling systems to ease burgeoning energy needs—and not just in Palestine.

In addition to projects that include UCI’s HQ, much of the company’s focus rests on Jordan, and Amman specifically, where MENA Geothermal is based. A contract with the American University of Madaba for $1.6 million served as a boost in the early stages, while projects in Cyprus, India, and Pakistan point to a global awakening to the virtues of geothermal energy.

And virtues are aplenty. “The majority of energy consumed on the national grid is used by buildings, and the majority of the energy consumed by buildings is for heating and cooling,” begins Al Sabawi. “Geothermal technology has the best track record and the most potential for lowering this type of energy consumption,” he adds, explaining that that the technology boasts a long life and minimal maintenance. The graduate of Canada’s University of Waterloo isn’t the only proponent; the US Environmental Protection Agency describes geothermal energy as “the most energy-efficient, environmentally-clean and cost-effective space conditioning systems available today.”

In layman’s terms, geothermal energy is produced by tapping into the consistent warmth that lies beneath the ground’s surface and channeling it into buildings to provide heat. In the summer, the reverse occurs: hot air is filtered back through the system and into the ground. Simple in theory—rather more complex in practice.

“You need to have significant knowhow, training and experience,” says Al Sabawi. “It’s not as simple as taking a product from another country…a lot of engineering design factors are taken into consideration.” Ground temperature, conductivity and absorption count as just three. Then there’s cost efficiency; for the founder it’s all about maximizing efficiency and reducing costs so residents can afford it.

Calculating the cost, however, isn’t easy. “It completely depends on the size of the unit,” says Al Sabawi, who also holds the title of the Middle East’s first certified geothermal engineer. He offers an example nonetheless, “Let’s say a conventional system was going to cost $10,000, a geothermal system would cost $20,000.” That’s double, but according to the founder, the end user would save around 70% or $2,000 annually on their energy bills, paying back the extra investment in just five years. “A geothermal system,” he says, “must be looked at as investment.”

Still, changing behavior is tough. Even in North America, the introduction of geothermal energy around 25 years ago took some getting used to. “It was said that the average customer for geothermal systems had a master’s degree, so that definitely makes it challenging!” laughs Al Sabawi. But the challenges go further. Adding to a list that includes lack of expertise, training, human capital and lack of awareness, there is a Palestinian elephant in the room.

“There are a lot of extraordinary challenges that I have faced as an entrepreneur and they’re a product of the political and economic environment,” explains Al Sabawi. Denial of entry to the West Bank, racial profiling, competition from the donor economy, and government bureaucracy all count amongst them. “It is not an environment conducive to investment, stability or economic growth—whatsoever,” he asserts.

In such an environment, many entrepreneurs would pack up the geothermal suitcase and leave. What they would not do is embark on yet another ambitious project in a nation heaving under more than 60 years of occupation—unless they were Khaled Al Sabawi. “My parents were refugees and made it to Canada against the odds,” he explains. “We were raised on the imperative that we were lucky to grow up in one of the world’s most progressive societies and that if we don’t help those in need, who else will?”

Turning responsibility to action, just as Al Sabawi was opening MENA Geothermal’s doors, TABO was in the making. Today, through the UCI project named after the old Ottoman word for ‘title deed’, the impresario may not be able to take Palestinians to Palestine, but piece by piece, he is taking Palestine to them.

But if opening a region’s geothermal eyes was difficult, placing land into Palestinian hands was near impossible. In Ramallah, skyrocketing land prices can reach as high as $1 million for a quarter-acre, while land in the surrounding villages presents another problem: the majority has no proof of ownership. “You couldn’t buy land inside the city because it was too expensive, you couldn’t buy land outside because there was no title deed—we clearly had to step in and meet the demand,” explains Al Sabawi.

Meeting demand meant not just stepping, but plunging, head first into a process so complex that the Palestinian Authorities failed to fathom it—until Al Sabawi emerged with three A3 sheets of paper that is. “When I met the minister of local government and I unfolded the flow chart for creating a title deed, he looked at it in astonishment,” recalls the entrepreneur.

In the authorities’ defense, the process is a complex one. After identifying land for sale from Palestinians who possess inheritance documents but no official papers, Al Sabawi sets about obtaining approval from relevant family members, before determining the borders in a manner more accurate than the ‘this olive tree to that one’ approach.

“We have to walk every corner of the land with a GPS machine, the head of the village council and every single neighbor,” explains Al Sabawi. Every neighbor must sign to confirm the borders before the plan is posted for objection. But this is just the beginning; then comes the laborious process of navigating what Al Sabawi describes as “an enormous web of Palestinian Authority bureaucracy.”

Indeed, while creating master plans and public infrastructure—TABO develops the necessary connecting roads, too—are serious undertakings, Al Sabawi’s biggest challenge emanates from an unlikely source. “The challenge did not come from Israel, it came from the Palestinian Authority,” he asserts. Corruption, apathy and ineptitude, according to TABO’s leader, count amongst the many flaws permeating the PA from top to bottom.

But where there’s a will—and title deed—there’s a way. Three years on from TABO’s launch, the initiative has enabled 250 families, both resident and in the Palestinian diaspora, to own 371 plots of land. Of TABO’s sales so far, 30% have been generated by the diaspora. And the cost falls far short of the million dollar price tag hanging from land just minutes away. TABO offers plots for between $13,900 and $32,000, with interest-free payment financed through the company for up to four years.

Ala’eddin Al Atari, Vice-President and Board Member at Al Hejailan Holding in Saudi Arabia, is just one satisfied client. As a Palestinian living in the diaspora, Al Atari has invested in five plots of land through TABO, with the title deeds for two now securely in his hands. Meeting Al Sabawi in Riyadh, Al Atari was impressed.

“Khaled and the company were very professional: the idea, the way they deal, their commitment to their promises,” he says. “The projects they do are attractive for investors. They give us all the facilities to ensure that our investments are safe and most of the risks are eliminated.”

For Al Atari and others, building is yet to commence on their new land. But it’s coming. “First we allow people to own the land. Then they can build based on what they can afford,” explains Al Sabawi. The point of the project: to help establish Palestinian communities before Israel builds its settlements.

In theory, the land is untouchable. After Oslo, the Palestinian territories were divided into three areas: A, B and C, with just the latter falling under direct Israeli control. Al Sabawi works only in Area A, a zone officially under PA administration, but leaves nothing to chance. “If Israel tries to circumvent the agreement they’ll go after land without title deed, because once you have proof of ownership of your land it’s very difficult for anyone to put their hands on it.”

And Al Sabawi is out to keep it that way, securing proud Palestinian land with the papers to prove it. As he rolls out new master plans, his next task is to hook his emergent communities up to the grid. Completing the circle with geothermal energy may be a way off but building the future takes time. Signatures are still drying on title deeds across Palestine, but rest assured, the ink is already making an indelible mark.