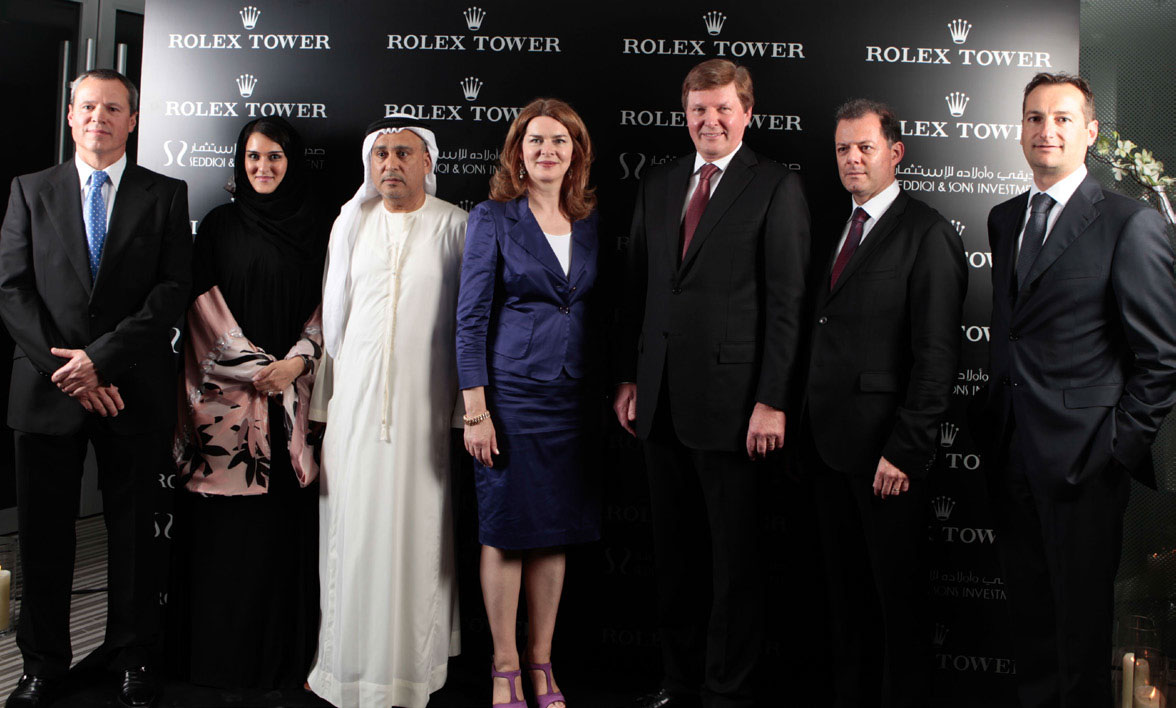 Legacy and accomplishment ooze from the corporate offices of Ahmed Seddiqi & Sons; every surface displaying photographs that chart the rise of this family of watch lovers. A sepia-tone picture of a youthful company founder, the late Ahmed Qasim Seddiqi, takes pride of place next to a recent snapshot of his youngest son and vice-chairman Abdul Hamied Seddiqi posing proudly with his own daughter, Hind—the first female family member to enter the corporate office.  Both pictures serve as a reminder of how far the business has come, from humble beginnings in 1940s Bur Dubai to leading Swiss watch retailer, with a new generation that will shape the future of this family enterprise.

Indicative of their success, the Federation of the Swiss Watch Industry cites the UAE as the world’s ninth largest importer of Swiss watches, recording total imports of over $2.4 billion from January to April 2012, compared to $2.1 billion for the same period the previous year. As imports rise, it is difficult to determine what came first; growing demand or the dedication of the Seddiqi family in bringing luxury timepieces to the Middle East. Most likely, Ahmed Seddiqi & Sons is implicit in both.

One could be forgiven for equating this business with all things traditional. Steeped in time-honored values and with eleven family members counting amongst the company’s staff of 665, the Seddiqis have gained a reputation for quality and loyalty—values that extend to Ahmed Seddiqi’s beloved brands. Westend, the first Seddiqi brand, still features amongst their collections and was the first watch given to the vice-chairman by his late father. “It was very difficult for him to give me a Rolex!” laughs Abdul Hamied Seddiqi. At a time when the UAE was starting to develop, old was forsaken for new, and the vice-chairman laments that his watch, along with many other Seddiqi timepieces are long gone. But, all is not lost; “Slowly, I am collecting some old clocks and restoring them,” explains the dedicated watch connoisseur, pointing to a glass case hanging behind his desk.

Demonstrating, however, that there is more to this business than an inspirational past, Ahmed Seddiqi & Sons is keeping up with the times with the introduction of flagship concept, 1915 by Seddiqi, designed to cater to the young and fashionable. Indeed, this is a story of how the past and the present can be successfully combined; the 1915 concept owing its name to the year of Ahmed Seddiqi’s birth.

As vice-president of marketing and spokesperson for the company’s latest initiative, Hind Seddiqi shares the family passion, but explains there is more to it than watches, “We want it to be a destination for anyone who’s into fashion and accessorizing…anything that’s in trend is going to be in 1915.” Targeting young clientele, the first 1915 store launched in February 2012 in Dubai’s Deira City Centre and has products to match all tastes and pockets, with prices across 13 brands ranging from around $130 to over $1,300. Just a few select pieces exceed the $2,000 mark. Now, the business savvy family is exporting the concept across the UAE.

Describing the vision behind 1915, Abdul Hamied Seddiqi, who regards Switzerland as his second home, stresses that the latest development does not indicate a departure from the company’s luxury focus, “The idea was just to divide luxury and fashion—keep luxury with Ahmed Seddiqi & Sons, and fashion with 1915.” Recalling the Dubai of his father’s time, the vice-chairman explains where watches are concerned the concept of fashion did not exist back then, but he is confident in the potential of 1915, “We are targeting young people. This is our future,” he explains.

In fact, today’s youth constitute not only a vital client base, but the lifeblood of the Seddiqi enterprise. Considering the third Seddiqi generation, the founder’s son explains quite simply that, eventually, they will need to manage everything. He stresses, however, that each family member joins through choice. “We don’t force them. Ok, we need them, and if they are good we say welcome,” he explains, but warns, “If they don’t want to work and just want to be in the company to get  a salary, then we say sorry there is no place for you.”

With a vice-chairman who himself insists on punching in and out, arriving on time is a given for the blooming Seddiqi executives as they adhere to a strict policy of ‘leading by example.’ But at the end of each day, normal life resumes and Abdul Hamied Seddiqi takes care to separate business from home life. “I don’t like to talk at home about my business. I don’t want to involve my family or my wife. This is our policy!” he remarks.

Back at the office, Hind, and her cousin, luxury division director Mahra, along with fourth generation family member Muna, are proving their worth as women at the top of their game. Hind Seddiqi, who established the marketing department six years ago, seems to take it all in stride today. But taking the helm at the age of 21 was no mean feat, and the support of her family proved invaluable. “I used to knock on their doors every second,” she recalls. Now the devoted businesswoman and mother cannot imagine working anywhere else, half-joking that leaving would seem like betrayal.

This same family loyalty also applies to the company’s customers as generations of Emiratis follow tradition by opting for a Seddiqi watch. With the UAE the dominant market, reputation and trust are paramount. “He always talked about us being honest…having trust with the people and giving good service for clients to always come back,” explains Hind Seddiqi, recalling the principles that her grandfather instilled. Attesting to the Seddiqi reputation, Nada Freiha, director at MPP-ME, a Middle East-based authority on jewelry and watches, explains, “Their word is worth ten pages of a contract.” But developing such stature does not come easily as Christophe Nicaise, CEO of Ahmed Seddiqi & Sons explains, “We have worked extensively to gain the trust of both our partners and clients and we are proud to have brands and clients who have been with Ahmed Seddiqi & Sons for over 50 years.”

From inception, the company grew out of passion and business sense. Back in the 1940s, Ahmed Seddiqi’s eye was caught by a old_newspaper advertisement for a wristwatch. Captivated by the Westend timepiece that was to become a permanent fixture on his wrist, and determined to create a legacy for his children, the entrepreneur took a chance, placing an order in faraway India. With his first venture a success, the founder set his sights on the watch-making capital of the world. “He always had a vision…and he was sure that his kids needed to go to Switzerland…” explains Hind Seddiqi. And sure enough, they did. With Hind’s father and his brothers educated in Switzerland, foundations were laid for an unlikely relationship that saw Swiss watches travel to the sandy shores of Dubai.

But despite his company’s reputation as the first UAE business to trade with Switzerland, Ahmed Seddiqi never set foot in the country, making his accomplishments all the more impressive. “He had someone making the correspondence with a typewriter and sending letters at that time!” recalls the vice-chairman. More than 60 years on, Switzerland remains the focus. “They still wow you with the things they come up with,” enthuses the founder’s granddaughter.

Little may have changed where Swiss expertise is concerned, but for this family of watch enthusiasts, each year has brought growth. From a single store in Bur Dubai, the company now boasts 54 brands in 57 locations across the UAE, with Dubai the stronghold and a firm footing in Abu Dhabi. With three stores in place in Abu Dhabi’s Marina Mall and more planned for Sowwah Square, Al Khalidya Mall and Al Ain Mall, along with the recent acquisition of watch and jewelry retailer, Al Manara, Abdul Hamied Seddiqi is clear in his focus, “Our target now is Abu Dhabi.” While branching out into the GCC may seem the logical next step, the watch expert explains that the company’s UAE success may not translate to neighboring countries, with expansion largely dependent on finding the right brands. Furthermore, where luxury watches are concerned, he claims that the UAE market out-competes that of Saudi Arabia.

But for this Swiss watch enterprise, the approach to growth is based on its founder’s values as much as market dynamics, “We are very careful about our expansion…because in the luxury industry you need to have the personal touch,” explains Abdul Hamied Seddiqi. However, while maintaining close customer relations, the vice-chairman is conscious that as the company grows the personal approach cannot extend to all aspects of business. “Before I was doing recruitment…advertising, accounting, everything. Now we need to have people,” he concedes. Explaining that complex reporting was also absent in days gone by, Abdul Hamied Seddiqi states frankly, “We can’t do things the way we did 50 years ago.”

While times have changed, the vision of this family business has not. “It is the same vision because we move in one direction. We are in the watch and jewelry business and we are not going out of this industry,” explains the vice-chairman. Looking ahead, the dedicated businessman simply hopes that growth remains strong and that the new generation stays true to the company name. With a new wave of Seddiqis rising to the fore under the expert guidance of their elders, and as Hind Seddiqi welcomes her own children into the world, whatever the future holds, Ahmed Seddiqi & Sons is sure to be in safe hands as it continues to expertly blend tradition and modernity, demonstrating that good watches and good service are timeless.