VW, Ford Partnership Shows How Carmakers Are Trying To Stay Ahead Of Disruption 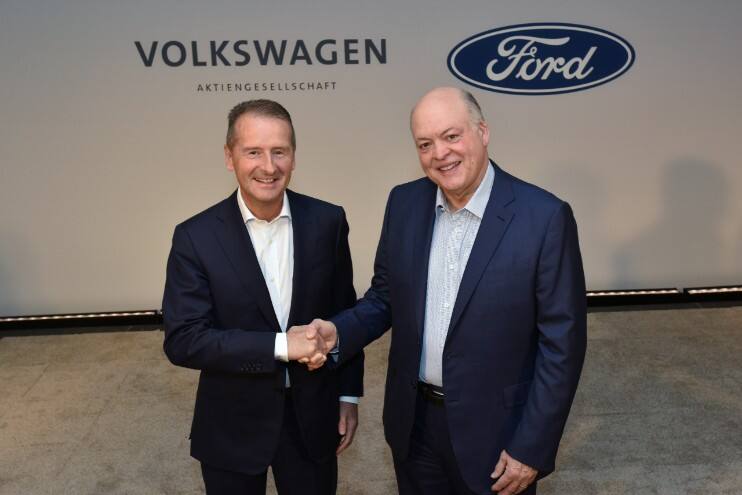 A few months after forming an alliance to build vans, auto giants Volkswagen (VW) and Ford last week inked a deal where the former agreed to invest $2.6 billion into Ford’s self-driving unit while ratcheting up an agreement to work together on electric and automated vehicles.

The deal sees VW taking an equal stake in Ford’s self-driving unit Argo AI, currently valued at $7 billion, which could have numerous benefits. For one, the partnership between the two rival auto brands – once unthinkable – comes amidst a growing interest in self driving cars and a rising consciousness about clean technology on the road. But it is a trend that is getting increasingly tough for carmakers to ignore.

Globally, investment in autonomous vehicles is increasing after research indicates that adoption of such technology could pick up. A report from ABI Research predicted that about eight million cars could have autonomous and semi-autonomous capabilities by 2025.

By February this year, investment in companies developing self driving technology had surpassed $1.6 billion. All the major car manufacturers from premium auto giant BMW to Toyota have put their pennies into this technology. Recently BMW and Daimler inked a long-term deal to develop automated driving while Honda pumped in about $2.75 billion into the driverless unit of its rival brand General Motors.

So, what is driving the rivals to find common ground within the automotive industry? Experts point out that such joint partnerships are alluring as they reduce the development costs. Partnering could significantly bring down development costs as they field competition from relative upstarts like Uber and Waymo, Google’ self-driving unit.

In the case of the latest Volkswagen and Ford deal, a partnership could help save both companies billions of dollars. However, it might take years for the results to show. That has not stopped the carmakers from exploring further areas of cooperation. At a news conference in New York, executives said that Ford will be given access to VW's electric-vehicle architecture and Modular Electric Toolkit (MEB) to design and build at least one high-volume, fully electric vehicle in Europe for European countries, starting in 2023.

Whether driverless vehicles will take to the road or not, auto giants are fool-proofing their future with mutually beneficial partnerships.