Having Mastered The MBA, The University Of Manchester Is Branching Out 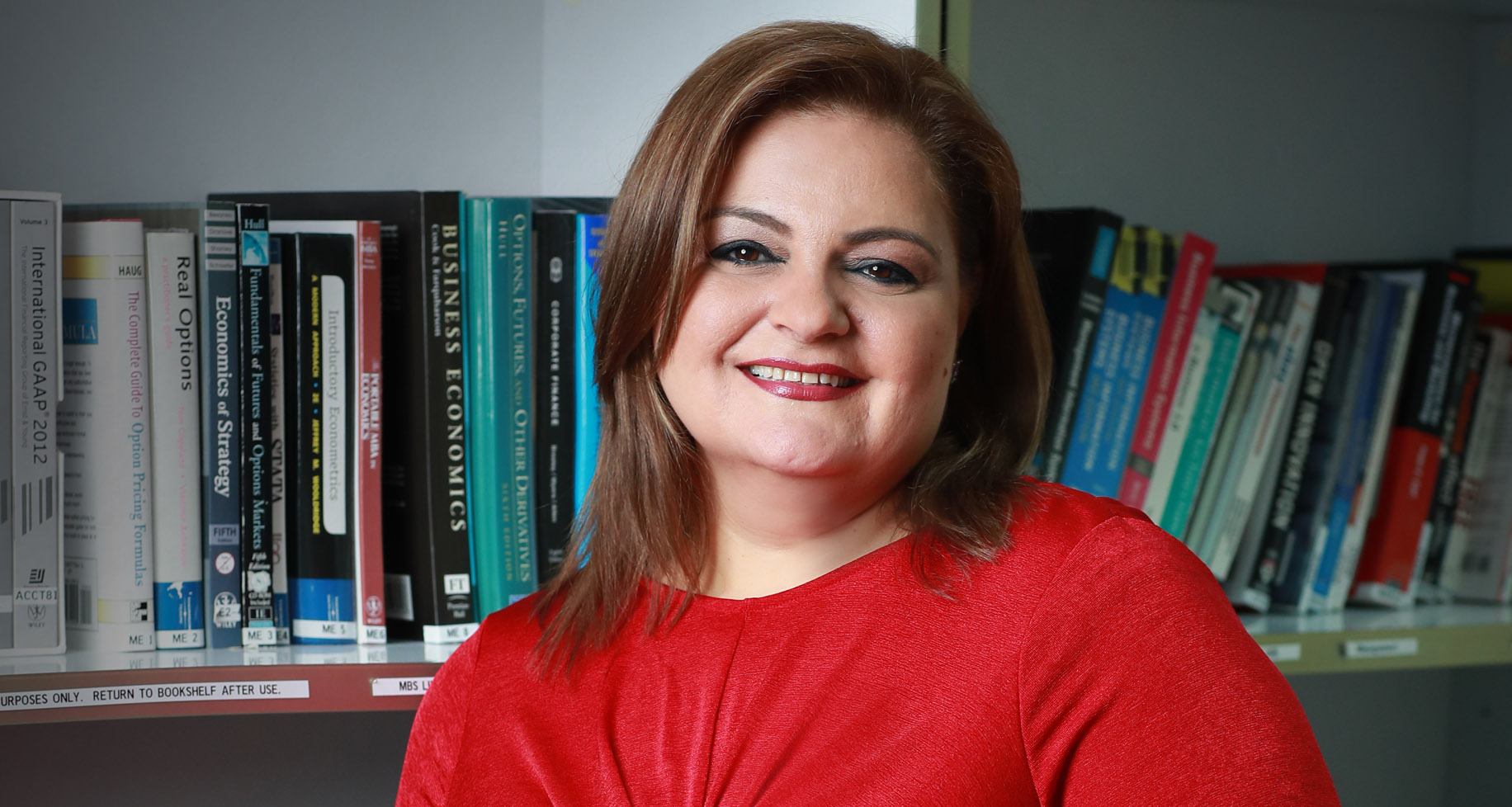 The suntrap terrace on the side of Randa Bessiso’s office is a surprisingly green and pleasant oasis hidden amid the buzz of beige office blocks in Dubai’s Knowledge Park. As she relaxes into a rare break between back-to-back meetings and phone calls, the Director of the University of Manchester’s Middle East Centre takes a seat in the calming garden with a deep breath and looks around with a wide smile.

She has lot to smile about. Many of her meetings and calls these days are to discuss the next stage of the center’s growth strategy. The Middle East center that she founded and grew from scratch 13 years ago is preparing to embark on a new chapter in what is proving to be a transformational part of its journey.

Traditionally known for its regional delivery of the Alliance Manchester Business School’s world-famous part-time global MBA, the center is now on the verge of expanding its remit more than threefold by increasing the master’s degree programs it offers from four to more than 10. Considering that two years ago it only offered one, that’s a steep trajectory by anyone’s standards.

The reason for the expansion lies in what may have appeared at the time to be a simple rename just over a year ago. Previously known as the Manchester Business School Middle East Centre from when it opened in 2006, Bessiso’s remit was initially limited to only offering the MBA programme. But in 2017 the center was reborn as the University of Manchester Middle East Centre, meaning that suddenly, with the full body of the university in scope, it could stretch its wings.

Since then the center has added three new degrees to its belt. Two new MSc programs in International Healthcare Leadership and Reliability Engineering and Asset Management, and a joint Global MBA program with the Kelley School of Business in the U.S.

It’s this focus on excellence in MBA delivery that has propelled the University of Manchester and its international centers in Dubai, Hong Kong, São Paulo, Shanghai and Singapore to the top of the list for students, teachers, businesses and eminent thought leaders.

For this, the University of Manchester is world-renowned. Ranked 29th globally according to the QS World University Rankings 2019, the 195-year-old institute is where the atom was first split and where the first computer was built. Among past staff and alumni there are 25 Nobel Prize winners.

“[The students’] first week is in Washington DC and among the first modules they do is public policy,” Bessiso excitedly explains. “They meet members of parliament and senior white house staff; it’s incredible.”

Another bonus to this program is that at the end graduates are presented with two MBAs—one from the University of Manchester and one from the Kelley School of Business. With fees starting at $65,000 for the two-year program, the whole experience is designed to be immersive.

However, it is still the part-time MBA that remains the center’s bread and butter. “The MBA is always going to be our flagship,” admits Bessiso, 47. She says more than 2,500 students across the Middle East and Asia have enrolled onto the part-time MBA program via Dubai over the last 12 years, and more than 1,500 have since graduated, leaving just under 1,000 currently studying.

The popularity of the course lies in its transnational blended online learning approach. No less than half of the work is designed to be digital and completed online, from anywhere in the world. The method relies on students already being in a professional working role so that they can apply what they learn immediately and directly into a real-life setting. Periodically, the Middle East center brings the cohort together for networking and intensive face-to-face workshops with academics flown in from the University of Manchester.

Ramez Hanafi graduated five years ago and believes the MBA’s global educational experience gave him an edge in the workplace. “In todays’ competitive world, the best investment you can make is a strong education,” he says. “Like anything in life it is what you make of it… but well worth it.”

The U.A.E. is by far the biggest market for the Middle East center, with half of its students based in the emirates. Saudi is the second largest market in MENA, followed by Kuwait, Oman, Bahrain and the Levant.

The average student age is 39, although there is no age requirement and students can range from their early twenties to their late fifties. Things are less diverse gender-wise, with only 15% of MBA students female. Voted one of Forbes Middle East’s Most Influential Businesswomen no less than three times, Bessiso is an advocate for female leadership and the power of actualization—although she admits she has yet to sign up to a master’s program herself. “Maybe when we have one on drama,” she laughs.

Bessiso by her own admission fell into education. Born the youngest of four children to a Palestinian father and Lebanese mother in the early seventies, she grew up in Kuwait, where she dreamt of being on stage and working in film. However, she took a more traditional route and began studying Business Administration (Marketing) at Kuwait University before the 1990 Iraqi invasion forced her to give up her studies. Undeterred, she began her career four years later at Projacs International—she was made vice president for training and development just a couple of years after joining.

By 2000, regular trips to Dubai to visit her brother had Bessiso hooked on the vibrant growing city. In 2001, she packed her bags and moved to the emirates, meeting with a representative of the British government when she arrived. Supported by the Higher Education Funding Council in England, Bessiso was hired to set up a UK eUniversities platform that would promote UK universities across the world.

Things nearly took an entirely new direction in 2005 when Bessiso decided she wanted to give something back and applied to Austrian children’s charity, Save Our Souls, to become a fundraiser for village communities in Lebanon taking care of displaced orphans. She was getting ready to sign her contract when the telephone rang. It was her old boss letting her know that the University of Manchester had been in touch. It was exploring an opportunity to open a new international center in Dubai, and it wanted Bessiso’s help. She agreed to assist with the setup, organize the logistics, make a few calls—just for a couple of weeks. That was nearly 14 years ago.

Bessiso lay the foundations from her kitchen table. She connected with policy makers, ministry contacts, British councils and embassies. She acquired licenses, she set up bank accounts. The Manchester Business School Middle East Centre opened its doors in 2006.

Over the next decade Bessiso built her team from zero to 20, and together they have helped hundreds of professional students every year to identify their goals and become better leaders. The Middle East center became the largest and fastest growing in the University of Manchester’s international network.

“The demographics of the region have contributed, with a large population of well-educated and experienced business people,” says Professor Fiona Devine, Head of the Alliance Manchester Business School at the University of Manchester. “And of course, the part-time MBA programme offers an attractive package of a flexible blended-learning format, and face-to-face contact with peers and faculty, which can be personalized to meet career objectives.”

Bessiso recalls celebrating the center’s tenth anniversary in 2016 on the lawn of the British Embassy in Dubai surrounded by her team, partners and alumni. She had already received the call confirming that their success had not gone unnoticed. The University of Manchester had agreed to give the Middle East center the power to offer a full and extensive list of master’s degrees. The proud director was jubilant as she announced the news to the crowd.

The team is now preparing to introduce up to six new programs in the next two years, and then two or three per year after that. The most imminent are an MA in Educational Leadership in Practice and an MSc in Real Estate Management, both due to start in September next year.

Other programs on the list include an MSc in Leadership for Development, which is being delivered in partnership with the University of Melbourne, an MSc in International Fashion Marketing, which will include residentials in Milan and Paris, and a cluster of healthcare-related programs looking at everything from informatics to skin ageing.

Bessiso is now restructuring and reskilling her team. Although most of the university’s academia is centralized in Manchester and the more mundane functions are being automated, she still needs to make strong preparations for a rapidly expanding remit.

Unfazed, she is a picture of calm excitement as we reluctantly peel ourselves away from the sun-drenched terrace. “We’re making plans to change the world,” she smiles.