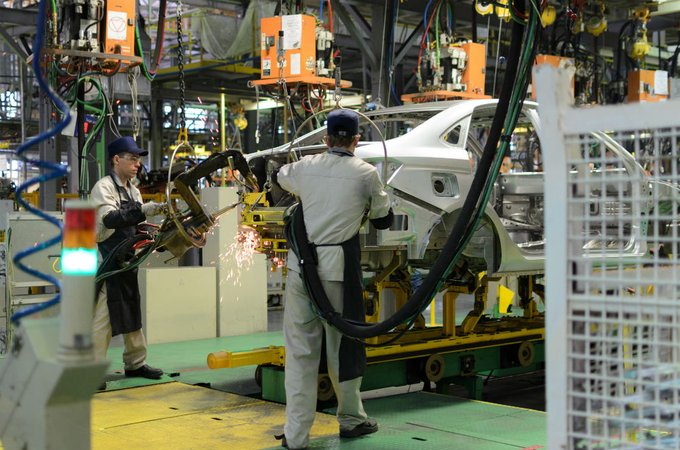 Picture a factory. Employees toil at lines, doing the same task, repeatedly, in order to assemble a final product. A line stoppage or bottleneck can cost a fortune. So too can even the smallest of errors by any of the people tasked with detailed assembly work. What if the manufacturer could see what was going on, in real time, and fix any issues before they become real problems? Or come up with ways to make the process run smoother and more efficiently?

That’s the basic idea behind Drishti Technologies, a four-year-old startup cofounded by Prasad Akella, a 57-year-old Indian entrepreneur who’s best known for leading the General Motors team that developed collaborative robots in the 1990s. With Palo Alto, California-based Drishti (the name is Sanskrit for “vision”), Akella uses computer vision, machine learning and real-time videos and analytics to make production lines run better. The goal: Use technology to help people improve their work — increasing productivity and improving quality— rather than replacing humans with machines. “I realized that most manufacturing is still manual, and nothing has changed dramatically since Henry Ford,” Akella says. “Nobody had a handle on the processes. Other companies were focused on machines, but those are easy problems because a machine is a machine.”

Manufacturing is a $13 trillion global industry, but coming up with solutions to its problems are hard. Akella and his cofounders—Ashish Gupta, a serial entrepreneur, and Krishnendu Chaudhury, a computer-vision and deep-learning expert who is the company’s chief technology officer—have toiled away, largely under the radar, for the past four years, with just $12 million in funding from Andreessen Horowitz and Emergence Capital at a valuation of $29 million, according to PitchBook. Today, Drishti hit a milestone, disclosing that it had signed on Denso, one of the world’s largest auto parts suppliers with $48 billion in revenue, as a client.

All told, Drishti has now signed on clients in the automotive, electronics and medical-device markets in the “double-digits,” according to Akella. Though he declined to identify any of the others, he noted that those customers have combined revenue of more than $600 billion. “Building a product like this is an effort,” Akella says. “Customers like this are extremely demanding, and you only get one shot at them.”

Akella received a bachelor’s degree in aerospace engineering from the elite Indian Institute of Technology, before moving to the United States where he earned a Ph.D. in robotics from Stanford. He first immersed in manufacturing at General Motors, where he led the team working on collaborative robots in the 1990s. After leaving GM, he cofounded a networking startup and then spent time at big companies, SAP and Thomson Reuters, where his focus was data and analytics. By winter 2016, he was ready for a change. “I was rethinking my life, and I said, ‘You know what, I love trying to change things, given my age at that point in time, do I have the stomach to do it once more?’” Akella recalls. “On vacation in Tahoe, I came to the conclusion I wanted to do it.”

He knew he wanted to do something in manufacturing again, and realized that computer vision could help companies get a handle on their processes. He joined research center SRI International as an entrepreneur in residence to think more clearly about the problem and possible solutions—and get advice from computer-vision experts there. “I might have a Ph.D. in robotics, but I don’t know enough about computer vision,” he says. While there, Akella lined up his cofounders: Gupta, who’d previously worked on unstructured data aggregation at Junglee (acquired by Amazon) and business process automation at Daksh (bought by IBM), and Chaudhury, a computer vision and deep learning expert who previously worked at Google, Flipkart and Adobe. He also started quietly working with Denso and another large customer in the electronics space that he declines to name.

Denso started testing the Drishti technology on a demo line that makes engine-cooling modules at its Battle Creek, Michigan, plant a year and a half ago, and is looking to expand it on a trial basis to its Tennessee plant, likely in the first quarter of this year. “Until Drishti came up with this technology, the only way to improve the productivity or efficiency of these manual operations was for an industrial engineer to go on the floor and make notes about bottlenecks and cycle time and do an analysis,” Raja Shembekar, vice president of Denso’s North American production innovation center, says. That was a slow, laborious process, and for a manufacturer steeped in the Toyota lean manufacturing system of kaizen for decades it was also a tough way to get that last little bit of inefficiency to improve. “This was a struggle for us,” he says.

With Drishti, he says, Denso has seen double-digit improvements in some of its key performance indicators, though he declines to be more specific about those metrics. Key things that Toyota-affiliated Denso tracks are cycle-time variance (even a few seconds can add up), bottlenecks and standardized processes (the more standardized, the fewer errors). In one case on the test line, managers were able to confirm that a worker’s idea to rebalance a line to rid it of bottlenecks was smart before they made a costly change to operations based on someone’s gut. “When a line launches, one station will have trouble today and create a bottleneck. Then you fix it, and the bottleneck moves somewhere else. It’s a balloon,” Shembekar explains.

While Denso is currently testing Drishti in its U.S. plants, Shembekar says that he believes it could be especially helpful for its factories in lower-cost locations like Mexico and Thailand, where turnover among employees is high. “This tool will preserve jobs because performance in every category will improve and there’s less reason for Denso to consider expensive automation,” he says. He declines to say how much Denso is paying for Drishti.

Andreessen partner Frank Chen, who led the firm’s investment in Drishti, believes the startup can ultimately become the leader in a field that it is creating. “They are trying to invent a new category,” he says. “We aren’t investing to make a small company, and hope they get bought by Black & Decker.”

Getting there hasn’t been easy for Drishti. Applying computer vision and machine learning to humans at work, who may be different shapes and sizes, holding their screwdrivers at different angles, or facing away from the camera, turned out to be an enormous technological hurdle. “You need the neural networks so you can analyze gobs and gobs of videos,” Akella says. “There’s deep, deep, deep technology behind it. That’s part of what has taken us time.”

But his background of designing machines to work with humans led him to persevere. Joint research by Drishti and A.T. Kearney found that humans on the factory line perform 72% of all tasks, suggesting that even as industry focuses on robotics and automation the future will be one of human-machine collaboration rather than robotic takeover. “My perspective, as an entrepreneur in my 50s is different,” Akella says. “I’m not doing this because of fame, but because I believe manufacturing needs transformation and I believe I can change the lives of people on the floor.”