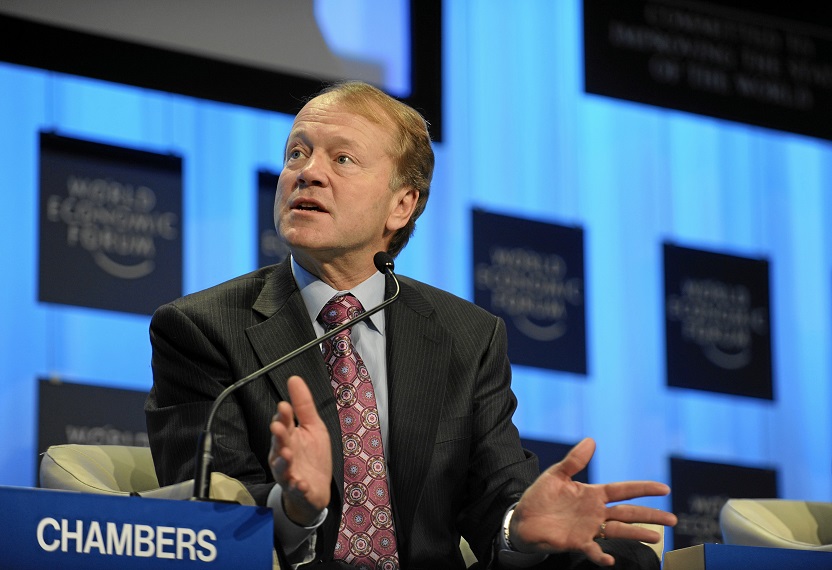 John Chambers, who just turned 70, prefers to take any stage at a run. In his tech trendy uniform—blue blazer, designer jeans, checked shirt, and blue boat shoes—he still exudes the physical energy of his successful tenure as CEO at Cisco Systems, which he grew from an annual revenue of $2.2 billion in 1995 to $49 billion in 2015 when he stepped down. Today Chambers runs his own boutique investment firm, JC2 Partners, in Palo Alto, California. He prefers to call himself a mentor to startup CEOs rather than a venture capitalist. When he’s not in Silicon Valley he can often be found in India, where he advises Prime Minister Narendra Modi’s government on digital transformation and the economy. I caught up with Chambers in mid-August:

Chambers: I did 180 acquisitions at Cisco. Though Cisco was big, I had to think like a startup CEO. I believe that most of the innovations will come from startups in the future. Large companies are motivated by this quarter and this year. But big innovations take you three to five years out, and you need courage to go for it and no fear to make it happen. That favors a startup mentality.

That’s not the accepted view. Many forecasters think tech giants like Google, Amazon, Alibaba and Tencent will drive innovation for the next decade.

Chambers: Not what I see. I teach at Stanford. I forgot the last Stanford student that went to a large company. They go to startups. Same thing at MIT. Same thing with the IITs in India. Even with Polytechnique in France. The world desperately needs healthy startups. Large companies, because of AI, are not going to grow head count for the next decade. Or maybe ever again. So therefore all job creation will have to come from these smaller companies getting big.

Are you overhyping digital transformation and AI?

Chambers: No. It’s the biggest trend in the last 30 years, since the commercialization of the Internet. Bigger even. It will produce an impact two or three times what the Internet did and in a much faster pace. It is accelerating.

Chambers: I’m not a real VC. I’m more of a strategic partner with these startups. I bring in talent to help them grow in scale. I’m a mentor and coach, and an investor. Once the team gets to know me, investing is probably number three or four of what they’re after in terms of my time and my energy. I teach about 40 individual sessions a month. My idea of fun is to take 12 startup CEOs on a week of camping and fishing in Alaska.

Will Silicon Valley remain the dominant hatchery for high-tech startups?

Chambers: The $600 billion in the valuation of U.S. unicorns gives Silicon Valley a false sense of optimism. In truth, the number of startups that are being put in the pipeline and the number that are coming out is half of what we did the 1990s.

Why are you so bullish on India?

Chambers: If you believe that digital transformation and AI are economic and social game changers, with a potential impact greater than the internet, then you look at how a country thinks about this for their future. PM Modi is the best leader in the world on this topic. He gets the need to build a startup ecosystem because that’s where the majority of your jobs will occur. He gets the execution, too: How you change education, build smart cities, improve security, create inclusion. I’ve met every leader in the world multiple times over the last 30-some years, and Modi is in the top three. I would say India is executing at the very high end of what is occurring anywhere in the world. The economy in India, in my opinion, will grow between 7% to 11% for the next decade.

Is that growth sustainable?

Chambers: You’re really asking, “Is India different?” Yes, and it’s not just Modi’s vision. It’s their IITs. India is graduating 600,000 engineers a year. A dozen of the IITs are doing startup incubation groups. Remember, it took China over two decades to really get rolling in tech startups and then go explosive in the last 10 years. India may make this move in literally a decade.

Chambers: If Singapore had 200 million people, it’d rule the world.

Are you bullish on the rest of Southeast Asia?

Chambers: I think Southeast Asian countries like Indonesia and Vietnam will be the next inflection points. Their economies are already growing mid-single digits, maybe a little bit better than that. They have young populations. They have a role model in India. Deep down most of them have a fear of China, which means they will be more of a follower of India. So, yes, I think in India is where I’d double down today and Southeast Asia is where I’d be doubling down in 5 to 10 years.