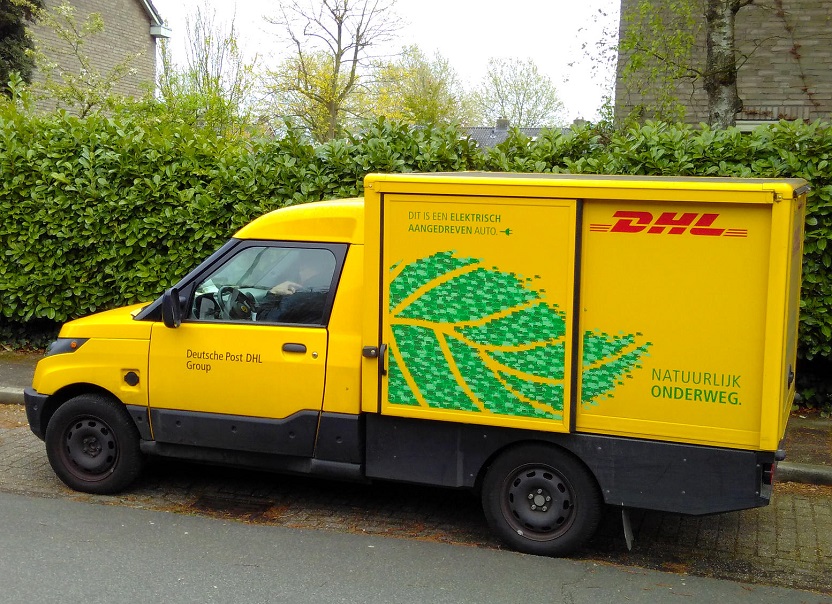 Hydrogen is the most abundant element in the universe, but vehicles powered by the clean fuel are somewhat scarce. In the latest sign that that’s changing, DHL is adding hydrogen fuel-cell vans to its fleet to cut carbon emissions with faster refueling time and longer range than battery-electric vehicles offer.

The delivery giant will initially deploy 100 of the “H2 Panel Vans” in Germany starting in 2020, DHL said in a statement. If they perform as hoped, it may expand the fleet, built by truckmaker StreetScooter using fuel cell systems from Plug Power, to 500 vans. They’re the first 4.25-ton commercial fuel cell vehicles with a range of up to 500 kilometers (312.5 miles) per tank, DHL said.

With the program, “DHL Express becomes the first express provider to use a large number of electric vehicles with fuel cells for last-mile logistics,” said Markus Reckling, CEO of DHL Express Germany. “This underscores our aspiration to be not only the fastest and most reliable provider on the market but also the most climate-friendly.”

DHL’s decision comes after startup truckmaker Nikola Motor unveiled an elaborate vision for fuel cell semi-trucks and an extensive network of hydrogen fuel stations to power them. It's raised an initial $300 million to get going and is conducting a $1.5 billion funding round currently to build its first factory near Phoenix and initial fuel stations. Beermaker Anheuser-Busch is a major first customer and is awaiting delivery of 800 of Nikola’s futuristic rigs. Toyota, which has sold hydrogen fuel cell Mirai sedans for years, has a handful of fuel cell semi-trucks at the Port of Los Angeles and is adding at least 10 more in a partnership with Kenworth.

Fuel-cell and battery-powered vehicles are both electric, sharing the same motors and many other components. The key difference is that batteries store electricity while fuel cells make it onboard as needed, in an electrochemical process that extracts electrons from hydrogen forced through fuel-cell membranes. Aside from electricity, the only byproduct is water vapor, rather than harmful exhaust. Beyond cars and trucks, they’ve been used by NASA for decades, they work as stationary electricity generators and are being developed to power trains and even ships and ferries.

DHL didn’t provide details of how much it’s spending on the van program, though Plug Power receives at least $20,000 per vehicle, said CEO Andy Marsh. “Every time we sell an engine, it'll be somewhere between $20,000 to $30,000 to start,” he told Forbes.

Though hydrogen passenger vehicles have been available in California, Japan and a handful of markets for the past decade, and there are some buses and other vehicles using them, Plug Power, one of the long-term players in fuel cell technology, has focused on selling units for forklifts and stationary electricity generation. Though as the technology matures and costs come down, it’s increasingly appealing as a power system for commercial vehicles.

“We fundamentally believe that you can make a value proposition with fleet vehicles because your hydrogen fueling you could be more centralized,” Marsh said. Refueling time for hydrogen vehicles is comparable with that of gasoline and diesel models, but range per fueling is also compelling.

“When you start thinking about range, and you have to achieve or move more than 200 kilometers per day, especially when you consider from city to city, around that kind of range, with batteries you start losing packaging density much more rapidly,” Marsh said.