Khaled Zaatarah Is Making The Jump Into Virtual Reality, But Is He Too Early? 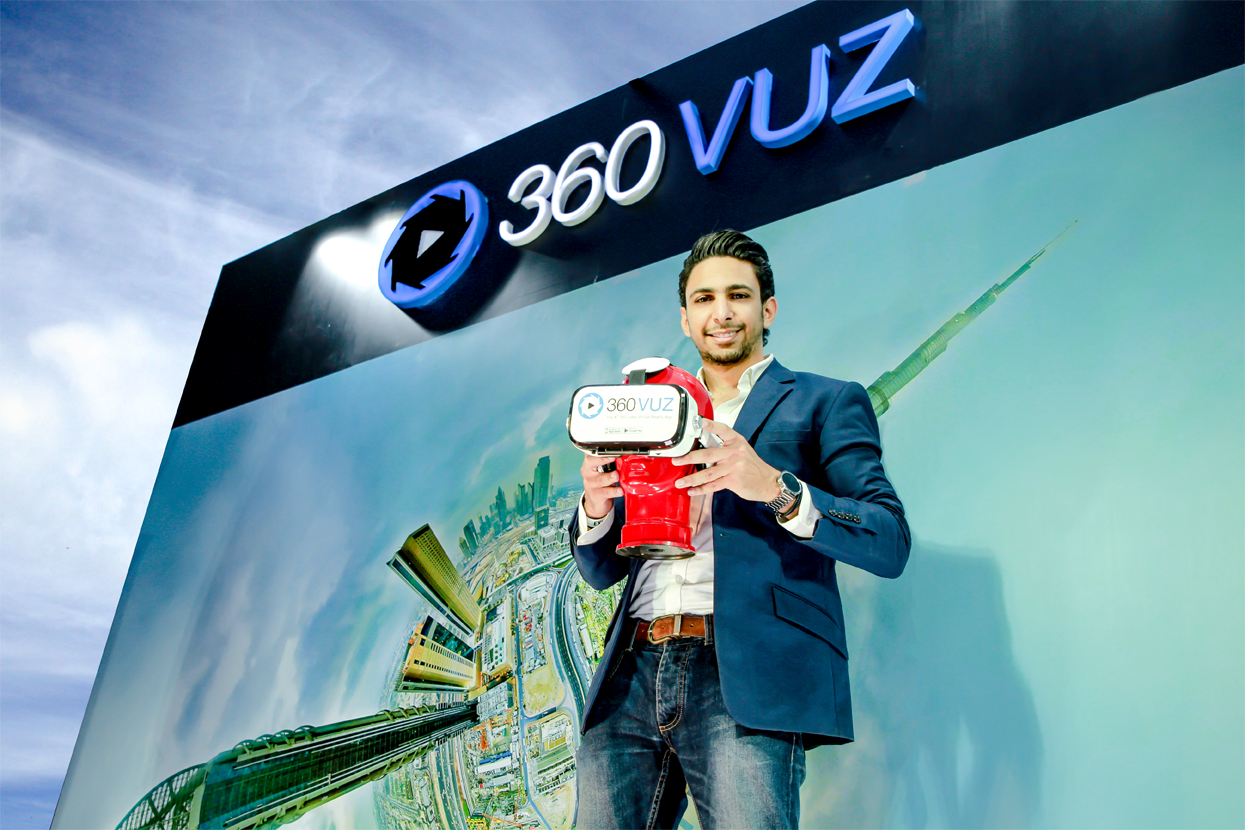 Khaled Zaatarah, 28, was drifting out to sea near the Palm Jumeirah in his blue kayak when he decided to start his company 360VUZ in 2016.

Sitting in the back of the kayak—the most comfortable spot—he had trouble steering the boat. He moved to the front, which made rowing most arduous, but he was in control.

“It was like magic, in only one step that I took, I started taking control of my life, I took control of the kayak and it started going straight, I’m not going with the flow,” he says. The next day, he quit his job as the brand operations media lead at Procter & Gamble in Dubai.

A Palestinian raised in Saudi Arabia and the U.A.E., Zaatarah came up with the idea for 360VUZ after being turned away at an airport checkpoint during a planned visit home nearly two years ago.

He decided to create a virtual reality application that would let people travel to wherever they wanted virtually using 360-degree videos.

“I automatically thought about buying the domain name for Palestine 360 and started buying all the other domain names like Jordan 360.com and Saudi 360.com,” Zaatarah says.

His app, 360VUZ, is a platform where users can share 360 videos. Zaatarah’s content makes up most of the videos on the app; His team creates videos at concerts, sports events and in luxury houses.

They recently added a live video feature to the app, and hope to eventually integrate mixed reality, made popular by Pokémon Go!, to the platform. 360VUZ, which is free to download, makes money through partnerships with other companies as well as advertisers.

The vast majority of the app’s content is free, but users have to pay for premium content.

Cameras specifically designed to take 360 photos and videos are able to capture the full surroundings of the camera. Once the footage is edited, viewers can “look around” the photo as though they were standing in the camera’s place.

Zaatarah found that commercially available 360 cameras like the Samsung 360 and Ricoh Theta didn’t have the high quality he was looking for, so his team of engineers made their own cameras with a lofty $70,000 price tag.

To help pay for the hardware, an expensive undertaking, he was able to raise nearly $1 million from Dubai Silicon Oasis and two angel investors in February 2017.

So far, over 500,000 people have downloaded the app, which gives them everything from a front-row seat at a Nancy Ajram or Tamer Hosny concert, to a ride in Dubai Police’s famous supercars.

The company has also partnered with property and job search website Dubizzle to create 360 videos of their properties.

Videos on the platform tend to focus on the U.A.E., which is home to 360VUZ’s office. Most of the app’s downloads come from Saudi Arabia, U.A.E. and Jordan.

In Jordan, 360VUZ landed a partnership with Zain, one of Jordan’s largest telecoms, and the Jordan Tourism Board to highlight the country’s landmarks through Jordan360.com. Zaatarah believes that the tourism industry will be strongly affected by VR, and plans to work on virtual reality tourism in countries across the

Middle East. “Big industries and big players are believing in VR now, because they’re seeing that this is the way forward, this is the future,” Zaatarah says.

Tech titans like Facebook, Samsung and HTC lead the VR hardware field, but it hasn’t been a smooth ride.

Early adopters of VR cheered when Facebook bought leading VR headset creator Oculus in 2014 for $2 billion, but Oculus founder Palmer Luckey was ousted from the company in March, and Mark Zuckerberg seems to have shifted his focus to augmented reality with the launch of Camera Effects, a platform for developers to create AR content for smartphones.

Although Goldman Sachs predicts that VR will grow into an $80 billion industry by 2025, it admits that it has to overcome a “chicken-and-egg issue,” where both content developers and consumers are hesitant to invest in the new technology before it has a solid base—consumers don’t want to buy expensive VR headsets and consoles before high quality, diverse content is available, and developers are cautious about investing their time and money in VR before the new technology has a strong consumer base.

But the gaming industry seems to be at a tipping point. Video game publishers are admittedly starting to move to virtual reality— At this year’s E3 games expo in June, Bethesda announced that popular titles Fallout 4, Doom and The Elder Scrolls V: Skyrim would come to VR consoles like PlayStation VR and HTC Vive.

Still, the PSVR headset costs around $400, not including the cost of the PS4 and controllers, and the HTC Vive headset costs $800 and requires an incredibly powerful computer, usually a costly venture. The technology is not widely accessible and has yet to hit the mainstream.

But content is also a problem for the industry, and despite investments into hardware by major tech companies and growing interest from companies who want to use VR to promote their products, Zaatarah maintains that few people are actually creating meaningful content.

“You don’t have content providers or people taking the lead on creating amazing content with a story that will travel, and not only in the Middle East but globally,” Zaatarah says. He calls the Middle Eastern VR industry a “one-man show” and says that he would be happy if more content creators joined the field—even as competitors to 360VUZ.

Other issues persist. The technology can cause motion sickness, a common enough side effect to have earned the name ‘Virtual Reality Sickness.’ VR platforms also feature designs that are

not intuitive to new users. Zaatarah’s company is the first VR startup to get funding in the Middle East, pushing him ahead in the fledgling market, even though only 40% of 360VUZ’s users come from the region; the rest are mostly from the US and Europe.

Although 90% of people in the U.A.E. use the internet, only 17% do so in Iraq, according to a 2015 study by the World Bank. For people in those countries, Zaatarah has broadcast 360 videos through television, which removes the immersive nature of the experience and gives viewers a fish-eyed view.

Though this means the videos are not shown in 360-degree form, it’s a temporary solution until he can make the technology more accessible.

But Zaatarah remains positive. A bubbly and talkative person, Zaatarah counts Tony Robbins, who has invested in US-based VR startup NextVR, as a major influence and even jokingly refers to himself as “The Middle Eastern Tony Robbins.”

He’s collecting interviews with successful businesspeople in the region for a book to motivate others to “do the jump” and find the path to success, a reference to his fateful kayak trip.

He’s aware of the issues surrounding VR, but sees opportunity through the challenges. To Zaatarah, leaving his cushy job at a multinational to become an entrepreneur in a pubescent industry was a calculated risk.

“Our vision is to build the industry and make it that big, and we want to partner and work with the best,” he says. “If you can have 360 degrees, why stick to one degree?