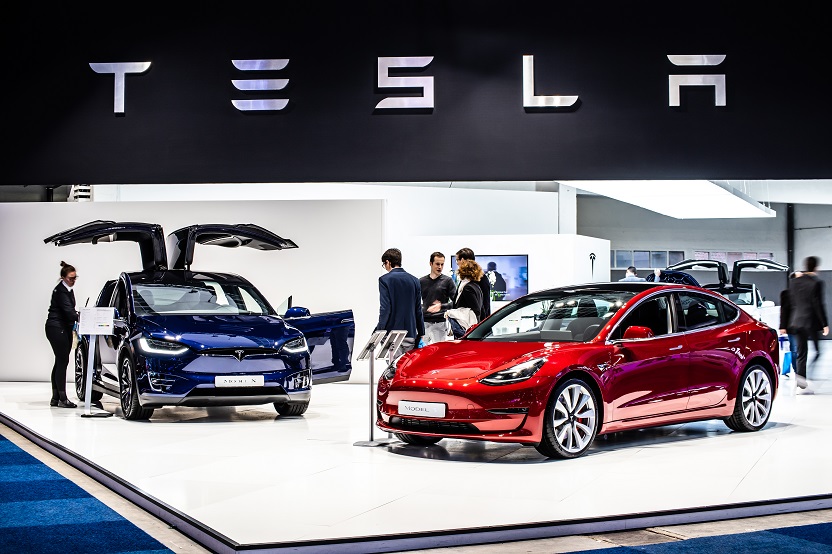 Tesla delivered a second straight quarterly profit for the final months of 2018, a company first, but emphasized that staying in the black through this year's first quarter will be a struggle due to restructuring costs and delayed revenue from overseas sales of Model 3 electric cars. Separately, CFO Deepak Ahuja will be retiring later this year.

The upstart automaker led by billionaire CEO Elon Musk earned $139.5 million, or 81 cents per share, for the quarter that ended Dec. 31, the company said in a letter to shareholders. That was below a consensus estimate of $182.7 million for the period, or $1.05 per share, the average of analysts surveyed by Bloomberg. For the full year, Tesla stayed in the red with a net loss of $976.1 million.

Tesla shares dropped in after hours trading, down about 5% to $293.77, erasing a 3.8% gain prior to the results release.

The company aims to deliver at least 360,000 electric vehicles this year, led by higher production of the Model 3, up from 245,240 Model 3s, S sedans and X crossovers in 2018, Musk and Ahuja said in the letter. Tooling for the Model Y, a small crossover derived from the Model 3 platform, starts late this year. Still, they also cautioned that costs related to recent job cuts and other cost-saving moves hit this quarter.

"We expect that the restructuring actions taken in Q1 will reduce our costs by about $400 million annually," Musk and Ahuja said. Additionally, the weeks-long delay in shipping Model 3s to China and Europe, where deliveries get under way from late February will "create a temporary but predictable dip in our revenues and earnings. As a result, our optimistic target is to achieve a very small GAAP net income in Q1."

Beyond that the company should stay profitable "in all quarters going forward,” Musk said in conference call.

That will only happen, however, if the Palo Alto, California-based company can "successfully execute on many fronts including handling logistics and delivery challenges in Europe and China," they said.

Tesla may also need up to $920 million to cover the maturity of its 0.25% convertible notes that hits early this year. "We have sufficient cash on hand to comfortably settle in cash our convertible bond that will mature in March 2019," Musk and Ahuja said.

During the results conference call, Musk said the Ahuja will be retiring as Tesla's CFO later this year, though he'll remain a senior adviser to the company. Ahuja first served as CFO for the company from 2008 until November 2015, when he retired the first time.

Ahuja returned to the finance job in March 2017. He'll be replaced by Zack Kirkhorn, currently Tesla's vice president of finance. Kirkhorn joined Tesla in March 2010, prior to the company's initial public offering.

While improved production and lower fixed costs will benefit Tesla this year, it faces no shortage of challenges, from capital expenses, aging products like Model S and X and more and better competition than it's ever faced, coming from companies including Porsche, Audi, Jaguar, Cadillac, Hyundai and more.

"Turning a profit, creatively addressing production challenges and getting the Model 3 to the masses were huge milestones, but keeping up this momentum is going to be virtually impossible," Jessica Caldwell, executive director of industry analysis for car researcher Edmunds, said in emailed comments. "Tesla's product lineup is starting to get stale, and now thanks to the elimination of the federal tax credit, buying one has never been more expensive. While there's still a cool factor to owning a Tesla, it may not be enough to convince buyers to choose one over brand new models from Audi, Porsche and Jaguar."

Tesla last week confirmed that it's reducing production of Model S and X, after eliminating the base 75D versions. At the same time, production of Model 3, with a base price of $44,000, will reach 7,000 units a week by year end, up from about 5,000 a week currently. That's about a year later than an earlier goal for the small battery-powered sedan.

During the results call, Musk estimated that global demand for Model 3, during a strong economic period, could be between 700,000 and 800,000 units annually. If there's a recession, it may drop to 40% of that, he said.

"The demand for Model 3 is insanely high," Musk said on the call. "The inhibitor is affordability."

The first point is his opinion, but the second is objectively true. When Tesla began taking deposits for the car almost three years ago, it touted a $35,000 version that it has yet to deliver. The cheapest Model 3 is $9,000 more than that today, before taxes, delivery and registration fees which push it to about $50,000 out the door. Cox Automotive estimates the average transaction price for a Model 3 is $55,801, or about $20,000 more than for a conventional car.

“It is undeniable that the U.S. market shrinks dramatically above a $45,000 price point,” Barclays analyst Brian Johnson said in a research note. “Looking at the overall market—which includes pickups and large SUVs that have higher price points than sedans—only 12% of the market is priced over $45,000, while moving to a $35k price point opens up another ~20% of the market (so 32% total), and had Tesla delivered a $35k car while the full tax $7,500 tax credits were in place the price point would have been available to 60% of the U.S. market.”

The company is optimistic that it can build its Shanghai Gigafactory this year and start supplying Teslas to the vast Chinese market as early as year end, something manufacturing experts don't think is likely. Musk noted in the call that this will be the first auto plant in China wholly owned by a foreign automaker.

In Gigafactory Shanghai's first phase, "we expect to have stamping, paint shop, body joining, and general assembly shops in operation by the end of 2019," Musk and Ahuja said. "This accelerated timeframe should be possible due to the radical simplification of our manufacturing layout and processes compared to our first-generation production line in Fremont."

The company has estimated that the initial phase of the plant will cost about $2 billion, rising to about $5 billion to scale it up to 500,000 vehicles a year over the next few years. Musk said the company is budgeting about $2.5 billion for overall capital expenditures in 2019.

Tesla hasn't yet revealed the final design of Model Y, but it's getting close and Musk said the Tesla Pickup may be shown as early as this summer. The company won't be the only player in that segment as Rivian, a U.S. startup, is getting ready to build its electric truck, the R1T that debuted in November at the Automobility Show in Los Angeles in November.

Meanwhile, compelling new EVs like Porsche's Taycan, the Audi e-tron and Jaguar's I-Pace will target many of the same buyers who've turned to Tesla over the past decade.

"Tesla essentially invented the luxury/performance EV, and for a while now, they've been the only game in town," said Brian Moody, Executive Editor for Autotrader.

"For Tesla, it won’t be easy to increase sales significantly, as the Model 3 has done in the past year," he said. "At the right price and with production issues ironed out, the car could continue to be a big seller. Right now, the only thing in the Tesla Model 3’s way is the Tesla business."