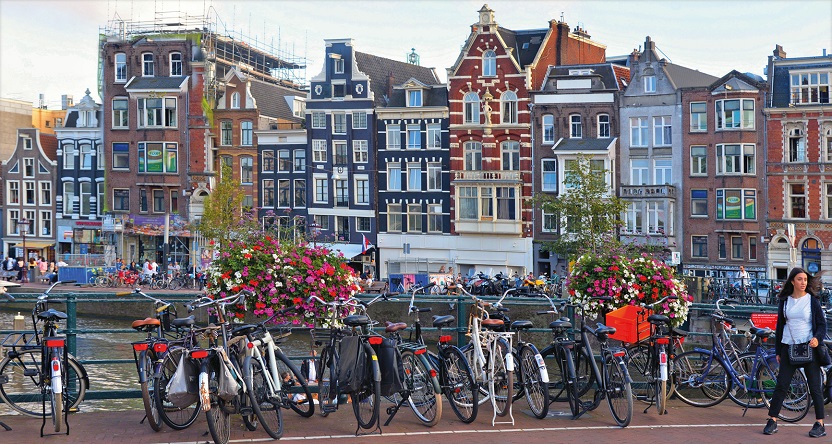 With urbanization rising, cities increasingly need sustainable mobility solutions, and the bicycle has proven effective time and again. A study by Environmental Health Perspectives found that for every dollar invested in separated bike lanes, cities could save $24 on the costs of healthcare, pollution, and traffic. Here are the most bicycle-friendly cities of 2019, according to the Copenhagenize Index—a survey produced by urban design consultancy Copenhagenize.

The 17th century capital of the Netherlands has a series of ambitious new plans through which it aims to improve bicycle parking and existing bicycle infrastructure. Amsterdam is creating new routes to improve cycling experience during rush hour periods for the 11,000 new inhabitants occupying the city annually. By 2025, the city will also be replacing over 11,000 car parking spaces from the city center (1,500 per year) with bicycle parking, street trees, and better walking environments.

Denmark’s capital city takes the mantle of the world’s most bicycle-friendly city, thanks to its impressive investments in encouraging cycling. Copenhagen has around 41,900 people cycling along the famous Queen Louise’s Bridge on any given weekday. Focused on a carbon-neutral future, the city has four bicycle bridges built or under construction for the 62% of inhabitants who commute to work or school by bike. A city best explored on two wheels, in total Copenhageners cycle 1.44 million kilometers daily.

Despite being one of the Netherlands’ oldest urban centers, Utrecht has built world-class cycling infrastructure. Today, 98% of Utrecht households own at least one bike and half own three or more. The city’s high ranking is largely owing to the local innovation and political will. In an effort to make intermodal connections as seamless as possible, Utrecht is building the world's largest bicycle parking structure, increasing capacity at the station to 22,000 bicycle parking spaces.

Belgium’s biggest port and second-largest city is on a mission to expand a network of cycle highways connecting to the wider region. It is the trifecta of municipal action, grassroots initiatives, and professional expertise that has cumulatively pushed the city into the top five. Antwerp’s bicycle market share has risen from 29% up to 33% from 2014 to 2018, with a slight majority of female bicycle commuters. The city is also targeting commuter trips and strategically expanded bicycle parking at train stations.

The eclectic European city of Strasbourg has long been recognized as France’s premier bicycle city. The new ambitious cycling plan builds upon a solid foundation, where 16% of locals ride a bike to work. It is also not uncommon to see municipal workers, delivery companies, and private citizens alike using cargo bikes for daily errands citywide.