A Test Of Mettle 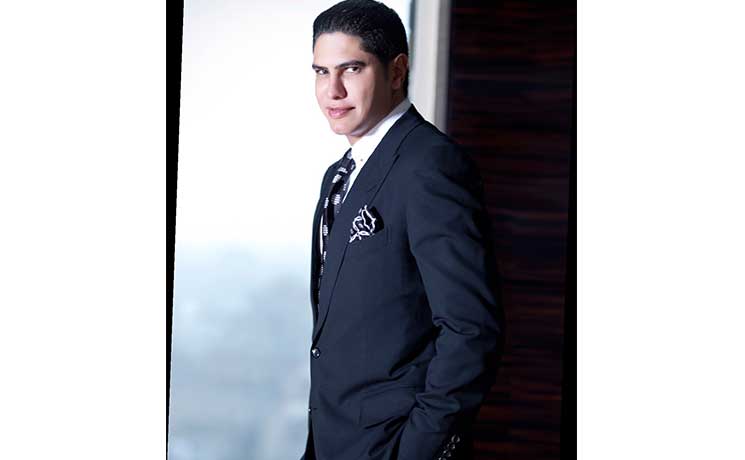 Google the name ‘Ahmed Abou Hashima’ and just below a well-orchestrated Wikipedia page documenting his professional and philanthropic successes, comes a stream of articles about his marriage to former wife, Lebanese actress and singer, Haifa Wehbe. But the 40-year-old CEO of Cairo-based Egyptian Steel Group doesn’t have time for gossip. Egypt’s economy is getting back on its feet, and as it does, the demand for steel is rising.

The IMF estimates that the nation’s GDP will grow to $324.3 billion this year, up from $284.9 billion in 2014, and in a country that stands as the 23rd largest producer of steel globally—the largest in the Arab world—for Hashima, the importance of his industry can’t be overstated. “Steel is crucial for Egypt’s economy,” insists the co-founder of the five-year-old supplier.

It will be crucial for the growth of Egyptian Steel’s companies, too. In a local market that churned out 6.5 million metric tons of steel in 2014, the CEO who appears younger than his years intends to secure a 20% share before the year is out. The bar he has set is high, but it’s not out of reach. Already, with a client base of government and construction companies inside Egypt, Egyptian Steel is at 10% market share and Hashima’s privately-owned group is primed to satisfy multiple links in the industry’s clinking chain.

Like a doting father, all, says Hashima, are equally important and though he won’t be drawn on profits, around $1 billion in total group investments and talk of an IPO “at a suitable time,” suggests Egyptian Steel, which he established with partners from Qatar and Kuwait, stands in good financial stead.

Moreover, while figures pertaining to Hashima’s balance sheet remain elusive, Egypt’s appetite for steel is clear. Per capita consumption in the country stands at 88.9 kilograms and rising, according to the World Steel Association. Though below the world average—235 kg in 2013—Harish U.S., Industry Analyst for Frost & Sullivan’s Metals & Minerals Practice, explains that Egypt’s per capita consumption is the second highest in North Africa after Libya—a fact which bodes well for the future.

“This indicates significant opportunity for growth of the steel industry in the region in order to reach developed nations’ high consumption standards,” he says, adding that the industry in Egypt is likely to grow at a compound annual growth rate of around 7.0% between now and 2020.

For Egyptian Steel’s chief exec whose first taste of employment was in a bank—an experience which concluded with a realization that he wasn’t cut out for a “conventional job”—growth, for both the industry and his group, requires increased capacity. Egyptian Steel currently operates two plants: one in Alexandria and one in Port Said. But grand plans are afoot for expansion that will see his employee count double from 3,000 to 6,000 within two years. As he speaks, two new plants are under construction in Beni Suef and Al Ain Al Sokhna; the capacity of each reaching 530,000 tons of steel rebar and 830,000 tons of billets—a type of cast steel—annually.

“They are mega projects with state-of-the-art technology, which saves around 30% of energy consumption, space, and is eco-friendly,” says the CEO. The first is due to commence operations later this year, with the second following suit mid-next year.

Once all four plants are fully operational, and with the group on track to securing its coveted 20% market share, Egyptian Steel’s front man intends to set his sights further afield, spreading his Egypt-only operations across borders to the wider African continent. “After we launch our two mega projects we will start considering African markets that have high demand and competitive energy prices, to replicate our steel plants over there,” he explains.

Already, Africa has a market for the tapping. According to the World Steel Association, of the total global crude steel production, which stood at 1,606 million tons in 2013, Africa produced 15.9 million tons, 6.8 million of which came from Egypt. For its part, the Middle East produced 23.4 million—though both are dwarfed by Asia, led by China, which produced almost 1.08 billion tons.

But this, believes the CEO, is Egypt’s year—albeit to the onlooker, it is anything but. Continuing political unrest, a leap into combat with Islamic State in Libya, and a string of unfavorable headlines for President Abdel Fattah el-Sisi’s government, mean that life inside the country isn’t without its challenges. Yet Hashima’s gravelly voice is laced with optimism. “From a businessman’s point of view, Egypt is a very promising market—there are 90 million consumers in this country; they might not be rich, but the demand remains high,” he insists.

Egypt’s needs are high, too. “It has immediate needs to revive the social housing sector to bridge the housing gap, improve the infrastructure scenario to appease the local population and increase tourist footfall that has traditionally been a significant contributor to the country’s GDP,” explains Frost & Sullivan’s Harish U.S. With Egypt’s steel industry enjoying strong forward linkages with other key sectors, the analyst adds that development of the steel industry is critical to achieving overall economic prosperity, without overdependence on any particular sector.

And the growth opportunities are not limited to the confines of Hashima's nation. Egypt has, as the CEO puts it, “all the qualifications” to be a business hub for Africa—a continent which he believes to be nothing short of the future for the world economy.

As an Egyptian citizen, the businessman is just as resolute. Looking back to 2010—the year before revolution took hold and the year in which his company opened its doors, the CEO describes today as an “historical era for Egypt.” And his country never forgets: “History will always remember who remained to support his country and who chose the easy way out and left,” he warns.

Heeding his own stark words, through thick and thin, Hashima has remained on home soil. The young CEO started off as a trader in the late 90s working with a friend’s father who was in the steel business, before going on to purchase a small share in a plant. That small share then grew into a full acquisition during the 2008 recession as he unburdened Emirati investors who wanted out of Egypt.

Of course, financial crisis is now fading and vociferous and violent upheaval—at the levels witnessed in 2011 at least—has subsided, but Egyptian Steel’s CEO still faces challenges of his own. China, the world’s largest producer and consumer of steel, and Turkey, which at 40 million tons per year, produces more steel than all Arab countries combined, present stiff competition. By Hashima’s own admission, Egypt has a way to go in increasing its global competitiveness.

Ask the CEO, however, and he will tell you that his biggest rival lies about as close to home as you can get. “My challenge is always to be better than the person I was yesterday. I am my own competition.”

But there are other more tangible obstacles. Shortages of energy and skilled workforces, along with rising prices of both, mean that costs are high and resources low. But like with any commodity, there are ups and downs—a reality reflected in the metal’s fluctuating price. “It’s a cycle. I have witnessed steel worth $200 per ton and I have seen it reach a peak of $1,200 per ton,” says Hashima. What remains constant is its role as an indispensable commodity. “A country’s development,” explains the Egyptian, “is measured by the consumption of steel per person.”

His words echo the sentiment of Dr. Edwin Basson, Director General of The World Steel Association. “We have consistently said that steel is the key to sustainable development for the world today and a key driver of tomorrow’s world economy,” asserted the DG in one of his organization’s recent reports. According to the Association, the industry employs more than two million people worldwide, not counting contractors and those working in related industries.“Including industries such as construction, transport and energy, the steel industry is a source of employment for more than 50 million people,” states the authority on steel.

With unemployment hovering around 13% in Egypt, it remains to be seen just how steel can ease the strain in Hashima’s home country. But as the Egypt Economic Development Conference looms, the loyal Egyptian is hopeful for a brighter future. “The aim [of the conference] is to reassure investors that the new Egypt is going to be attractive for investments…and with the new laws and regulations it will be a wise decision for any investor to place his bet on Egypt,” claims the CEO.

Meanwhile, though the nation remains divided over Sisi and his government, for Hashima, his leadership presents further cause for optimism. Decrees such as the gradual removal of subsidies—another highly divisive policy on the streets—floating Egypt’s currency, and efforts to appeal to foreign investors, all, says the CEO, promise positive impact, in the long run, at least.

Some sections of Egyptian society likely greet the proposed measures with curbed enthusiasm, but across political, religious and socio-economic divides, the country is united in one thing: a thirst for steel. And if it really is a measure of national development, then as demand rises across the most populous country in the Arab world, Ahmed Abou Hashima’s shiny alloy may well prove a solid backbone for more than just the infrastructure it supports.