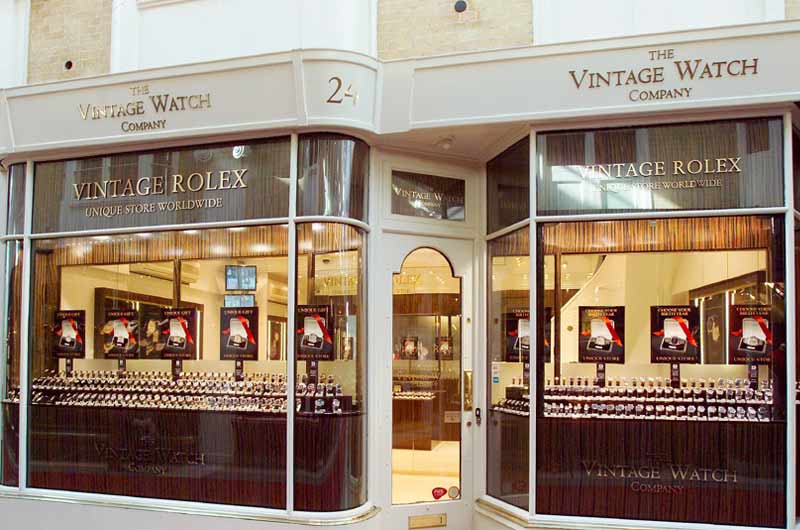 Just off central London's luxurious Bond Street stands The Vintage Watch Company. Nestled under the arches of the 19th century Burlington Arcade, the family enterprise run by founder John Silverman and his son David, is open for business; windows brimming with tempting timepieces-each with a story, each close to unique, and each a piece of Rolex history. In luxury retail, customer traffic can be unpredictable, and on a warm Friday lunchtime, all is calm save for curious passersby lingering at the display as city workers clutching brown paper lunch bags stroll past. The day seems slow, but when you're one of few specialized vintage Rolex retailers-the only according to father and son-and with clientele that ranges from Kate Moss to the King of Morocco, looks can be deceiving.

"The starting price in the shop is around £3,000 ($4,900), but we are quite active at the higher-end now," shares Silverman junior, taller and darker than his father, but equally well-dressed. The "higher-end" as it turns out, runs into the tens of thousands of dollars; the most expensive watch ever to exit The Vintage Watch Company doors since they opened in the mid-90s, fetching more than $310,000.

Just how that translates into profits at the private business is hard to decipher, but with 50% of those who walk in, walking out with a wristwatch, and website traffic reaching 20,000 visits per month-impressive for a small shop with just three non-family employee-times, apparently, are good.

But it's not just the occasional mega-sale that keeps the family business ticking. Individual sales at the shop average out at $9,800, spurred by a strategy which pulls on heart strings and appeals to customer nostalgia. With signs encouraging those who enter to 'choose your birth year', well-heeled shoppers in search of a unique gift or self-indulgent treat, can walk away with a Rolex from almost any given year-up to the late 80s that is. In recent decades, increased production has reduced exclusivity deeming newer models unworthy of a coveted window spot.

Indeed, at The Vintage Watch Company, exclusivity-or as close as it gets-reigns. "They're not one-offs but they are in terms of finding them again," says David Silverman who travels the globe in search of the authentic and the unique. "Finding the pieces, that’s the hardest part," he continues. The next trip on the agenda will see him jet off to Italy.

Stepping outside and gesturing to row upon row of watches, each carefully displayed according to age and collection, the young Londoner gives a whistle-stop window tour. Rectangular faces with leather straps that belong to the 20s, sports designs that emerged in the 50s-and later on the wrist of Steve McQueen-and jewel encrusted creations, which though not to everybody's taste, enjoy a loyal following. Moving through the ages, glass windows chart the history of a brand conceived in London in 1905 and crafted in Switzerland's horologic heartland.

Back inside, David Silverman calls up a staircase to his father. Making his way down, John Silverman's jovial personality precedes him, "I'm surprised he's even introduced me...with David it's always 'when I founded the business,'" laughs the company founder. Joking aside, he explains that The Vintage Watch Company wouldn't exist had it not been for his children. The veteran businessman built his career in retail, including selling antiques and jewelry on Bond Street, but it wasn't until his son showed interest in an idea he had been toying with for some time that the shop came to life.

"It started through a hobby. There was a Bond Street antiques center, I knew a jeweler in there and I said "why don't we try a few watches?'" explains the man who claims to be driven by business sense before passion. "I could see that Rolex was the brand and I could also see that there was business, so very quickly I realized that if one can sustain the stock, it's a unique concept." With his son onboard, and daughter Sara who also works part-time, The Vintage Watch Company was born.

"David's day-to-day, but obviously we go away buying together," explains the founder who candidly admits to not wearing a watch. The suggestion that he only does the enjoyable things these days is met by a humorous retort, "You said it!" remarks David as he begins to take out some of the store's most impressive examples.

The coral face and a website recently translated into Arabic hint at growing Middle Eastern interest in what the Silvermans have to offer. While the company prefers to do business in person, Mohammed VI of Morocco recently bought two watches for almost $90,000 through the website according to the founder. And, with 60% of the shop’s clientele coming from outside the UK, the Middle East is leading the way-not in terms of volume, but value.

In addition to majestic Moroccans, royalty and the rich hailing from the Gulf now join a growing client base that already includes the likes of Bill Clinton, Jennifer Aniston, Jay-Z and Harrison Ford-a small business’s dream perhaps, but at The Vintage Watch Company, it can be problematic.

"We had one situation this year with a Middle Eastern guy who finished up taking us out of collections because he bought everything. That's very difficult because you've got to have more people to expose everything to," explains John Silverman. Then of course, there's the challenge of replenishing stock. "We haven't had a diamond watch since!"

But it's not just about the few bulk buyers; across the board, affluent Arabs are developing a taste for vintage. According to the WorldWatchReport, although global interest in vintage luxury watches remains relatively unchanged, interest from consumers in the UAE and Saudi Arabia has increased 8% and 13% y-o-y, respectively. "While the UAE is ranked 17th worldwide in terms of consumer interest towards luxury watches in general, it ranks 12th when it comes to vintage watches, suggesting a more-than-average interest for this product category," says Jonathan Cifuentes, Head of Intelligence Technology at Digital Luxury Group. Saudi Arabia, meanwhile, ranks 19th for luxury watches, and 17th for vintage.

As for Rolex, Cifuentes explains that the brand ranks top in the UAE's luxury watch stakes. Where vintage is concerned, the watchmaker captures 31% of consumer interest which is growing at 16% annually-twice the national average, according to WorldWatchReport findings. Across Emirati borders in Saudi Arabia, appeal of the brand launched by a German watchmaker and English lawyer for a total sum of £30,000 in 1905, is greater still. "Rolex is even stronger in Saudi Arabia, where it captures 32% of interest towards luxury watches and growing quicker than average," says the Luxury Group's expert.

The business owner is only too aware of their irreplaceable nature-his rare stock is the company's life source-but concerns that the pool will deplete don't worry him. Will supply run out? "Not in my lifetime-that's all we're worried about!" jests Silverman senior. "Obviously the very rare stuff is difficult to find, but we've set a platform for vintage Rolex and all over the world now, we've got people looking for us."

As the platform grows, questions arise as to why more entrepreneurs aren't following suit. John Silverman has one explanation: "First of all, you've got to have a retail background. You've got to understand the concept…people don't understand that this is a brand in competition with modern Rolex." And understanding doesn’t end at brand power. "It's very difficult to replicate it because at the top end, it's not just selling the watch, it's understanding who's just walked in," he adds. Then there's cost. At The Vintage Watch Company, an average of $800 to $1,600 is spent servicing each watch before it heads for display-a sum that many businesspeople wouldn't entertain. For the Silverman family, it's a small price to pay as the company earns a global reputation.

Talk of international interest sparks conversation about the future. "I'm slowly having longer holidays!" smiles the founder. And with windows brimming with tantalizing timepieces, the family has no plans to grow outside its well-oiled doors. "We're not going to open a store anywhere else... people will come here. We've been offered [a place in] Harrods but we refused it," explains David. His father interjects, "What's the point if they can't come down the road?"

Business at The Vintage Watch Company is conducted very much on Silverman terms. As London winds up its lunch hour, a man walks into the shop asking for links to be added to a watch. He is swiftly turned away.

All is quiet in the sunlit gallery of the Burlington Arcade, but at number 24, a vintage heartbeat echoes around the walls of a family business that's turning Rolex history into an enterprising future. Even on a slow day, time is precious.