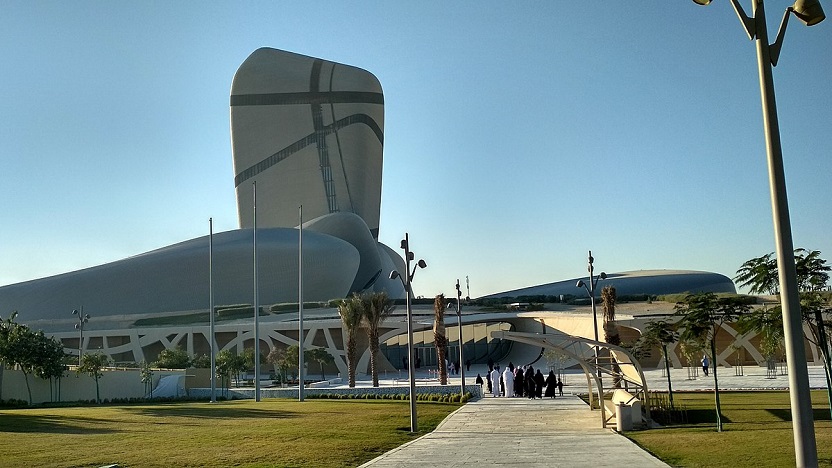 Plans for the King Abdulaziz Center for World Culture began with a vision in 2007, when oil major Saudi Aramco was preparing to celebrate its 75th anniversary. Today, the dream is complete, with a remarkable archeological structure, embodied in Ithra. Spanning an area of 80 square kilometers, the center is located in Dhahran, and was officially opened in 2016.

Our journey to Ithra was in the quest for knowledge, creativity and culture. Through its cultural programs and art exhibitions, the center focuses on investing in Saudi Arabian talent inside and outside of the Kingdom. “Ithra’s programs were updated and developed in accordance with the principle of cultural openness and communication with the other world cultures,” says Fatma Al Rashed, Head of Advisory and Strategy of the King Abdulaziz Center for World Culture.

When we arrived at the foyer, for just a moment, we thought that we were stepping into a university or a high-school hallway. Youngsters filled the corridors and facilities, greeting us with welcoming smiles, all willing to offer assistance if needed. We were later told that they were volunteering for programs to help build their presentation and speech skills, research skills and knowledge while allowing them to interact with an audience.

Aged 16 and over, these volunteers represent about 25% of the people who are assigned to assist the center’s visitors with registration, guided tours or creative workshops.

Robert Freth, the creative director, is responsible for supervising ideas, discussion and debate. A library filled with inspirational ideas connects the real world to the aspirations of creativity and innovation. Freth led us to the knowledge center, which is geometrically built like a bee hive. Extending over three floors, the area is a sanctuary for ideas born out of brainstorming sessions. Participants of the creative program can find almost 8,000 raw materials from around the world here, which they can translate into tangible creative products. Ithra also boasts of a Knowledge Tower, which holds data on the world’s most recent discoveries and includes rooms that claim to be able to provide up to 30,000 hours’ worth of education.

On the ground floor, we were scheduled to have a journey through time at “the Hall of Natural History”. Extending over three floors under the ground, the journey starts with modern art, followed by the history of the Arabian Peninsula, and Islamic art, dating back to the 17th and 18th centuries. Ancient artifacts and paintings are dotted everywhere you look. In one corner, an area of a Damascus reception room dating back to the 18th century (1767-1766) decorates the place, dominated by a light shade of red, complete with copper and brass pieces, along with walls made of Aspen wood and engraved with mosaics.

The joyful experience of walking inside the gallery brings you face -to-face with different historical eras, each exhibiting its own paintings, crockery, animals, maps and jewelry that has witnessed the unique identity and beauty of its time. The gallery also offers modern technology through its ability to navigate the maps using graphics.

The center also holds three other galleries: Arts, Generations, and Treasure Hall. It is the first museum in the kingdom dedicated to children up to the age of 12, with “programs focusing on developing the senses and training the skills required for kids while growing,” adds Rashed.

Our trip to the center coincides with the opening of the second global art exhibition “Landscapes of the Soul”. The exhibition explores the work of renowned late Norwegian artist, Edvard Munch, one of the leaders in modern art, and displays his works across five pavilions in the Great Hall, covering four emotional artistic expressions of melancholy, love, despair and loneliness in 40 displayed pieces. These include two of Munch’s most famous works: The Sick Child and The Scream.

Following the museum tour, we seized the opportunity to join the new cinema workshop in the cinema hall, which showcases documentaries, creative cultural and children’s educational and social movies through its all-year-long programs.

The development of the cinema industry in the kingdom is progressing, according to Rashid, by providing training opportunities for people from all ages, including beginners, amateurs and professionals. It’s not treated as just a commercial industry, but as a basis for demand. We observed the training and production programs happening behind the scenes, yielding more than 70% of the Saudi film projects so far.

“We started with short films, then we produced one of the very first movies that are considered long and don’t rely on a photography script,” says Majed Z. Samman, Head of Performing Arts & Cinema. “Today, the film maker, Badr Hamoud, has become one of the most known Saudi producers.”

We entered the hall hoping to catch a show as the performers were getting ready. With 900 seats and a fully equipped stage, it has already witnessed Arabic and international shows since its inauguration by performers such as the Mariinsky Theater, the great Russian orchestra. The center also has hosted the Vienna Philharmonic, the English Opera and the Indian Mahabharata.

The crowds within the center’s halls reflect residents’ desire to know more about this cultural haven. Visitor numbers have reached 750,000 since June 2018. “We are facing a big challenge of providing various programs that are not foreign to Saudi society, making visiting the center a new tradition for people,” says Abdullah K. Alrashid, Head of Programs.

Our trip to Ithra comes to an end, and we leave behind us an unusual flurry of activities. The center staff are preparing for the “Tanwin” festival to be held in October. The event will extend over three weeks, gathering participants from 20 different nationalities, to take part in the creative and innovative programs while translating the center’s vision. Aiming to inspire motivation and integration in music, film, theatre, science, arts, cultural heritage and entrepreneurship, the event will allow its participants to display the most significant creative ideas discovered by global creative platforms.