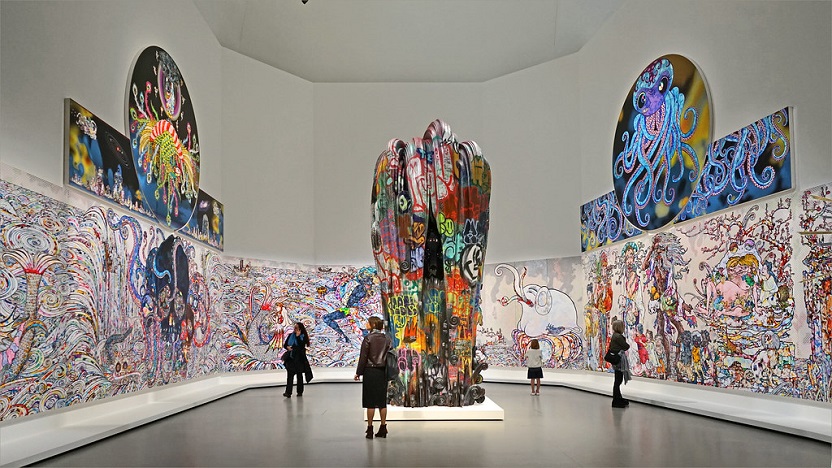 The Cubs logo was included in the capsule collection, which combined vintage sport uniforms from the 1900s up to the present day with Murakami’s iconic colorful flowers and bear motifs. Murakami made an appearance at the event wearing one of his signature designs.

This is not Murakami’s first commercial venture, having various collaborations with high-end brands such as Louis Vuitton, PORTER, Vans, Billionaire Boys Club, Kaws and the likes of Pharrell Williams, Kanye West and even the famous young singer Billie Eilish.

Murakami, often compared to Andy Warhol, is a japanese contemporary artist and one of the few hard-to-miss modern artists to emerge from postwar Asia. His work combines youthful freshness with vibrant almost anime-like flowers and strong motives sketching out Japan.

The flamboyant artist uses the name “Superflat” to refer to various flattened forms in Japanese graphic art, animation, pop culture and fine arts, as well as the "shallow emptiness of Japanese consumer culture”.

“It has been decades since I started to mention Superflat with the intent of producing a self-portrait of post-war Japan and its people,” said Murakami in one of his Instagram posts. “I relentlessly mention Japan’s post-war defeat, but in making my artwork, I cannot ignore this reality.”

Murakami held his first solo exhibition in the Middle East in 2012. The exhibition, entitled “Ego” functioned as a giant self-portrait and allowed a glimpse inside the artist’s mind. It also featured a variety of multi-media objects and environments, new modes of display and important series presented in their entirety for the first time. Ego featured more than 70 works from 1997 up to 2012, loaned from leading international institutions and private collections, as well as several new works created especially for this show.