Here's Who May Be Teaching Your Airline Pilot To Fly: In Air Travel Boom, CAE Soars 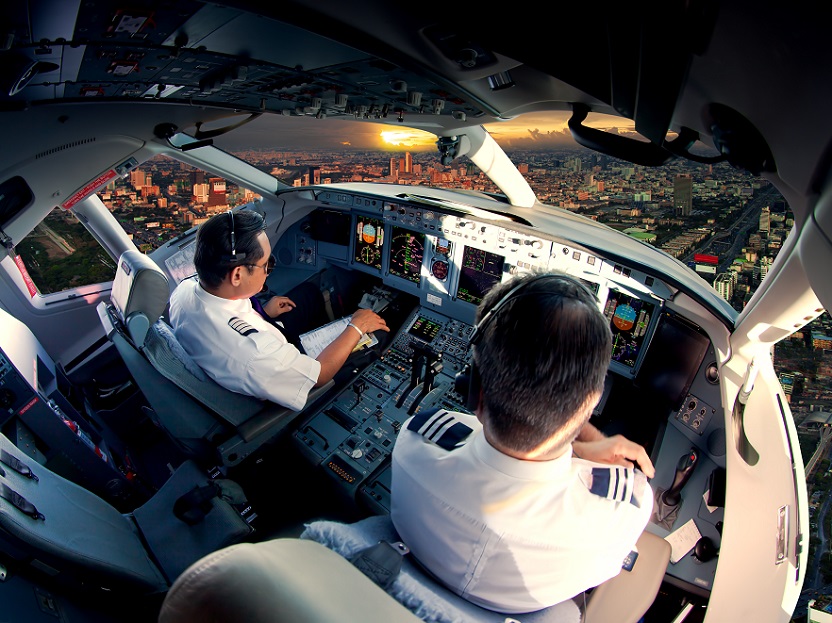 Marc Parent learned to fly before he earned a driver’s license. As a teenager in the 1970s, he’d hitchhike 15 miles from his parents’ modest home in the Montreal suburbs to the Saint-Hubert Longueuil airport, where he took lessons in a Piper Cherokee. Before he turned 18, he’d flown a Cessna four-seater 2,800 miles to the Bahamas and back with a friend.

Now as CEO of CAE, known for decades as the world’s top maker of flight simulators, Parent is steering the $2.2 billion (revenue) Montreal-based company on a lucrative new flight path, convincing airlines and militaries to outsource pilot and crew training to CAE.

Amid an unprecedented boom in air travel, CAE has become the world’s biggest flight instructor, increasing revenue 70% in Canadian dollar terms from when Parent took over as CEO in 2009, with the proportion accounted for by civil flight simulators falling to 20% of the total. CAE’s share price has increased more than threefold in the same period on the Toronto Stock Exchange, compared to a 40% rise for the benchmark S&P/TSX Composite Index.

The demand for CAE’s services is likely to keep growing. The International Air Transport Association projects that the annual number of airline passengers will double to 8.2 billion worldwide by 2037, driven in part by rising international living standards that are giving more people money to fly, with 54% of the growth coming from the Asia-Pacific region. Consequently, the world will need 790,000 new civil pilots over the next 20 years, Boeing forecasts.

Parent, 58, has been an effective salesman-in-chief for the flight-training business, in no small part because of his love for flying. Parent pilots his own Piper Meridian turboprop on business trips in North America. He qualified to fly a Boeing 737 by taking CAE classes and is working on a business jet rating. “I fly in my customers’ environment at 40,000 feet,” says Parent. “When we’re pitching airlines, they see that I understand their world.”

His sales pitch is that CAE can offer big savings by either taking over an airline’s training centers and running them more efficiently or funneling its pilots through one of the programs CAE operates in 65 centers around the globe. A large carrier with in-house instruction might train 5,000 pilots a year; CAE trains 135,000 annually, as well as 85,000 flight crew members. “You can imagine the knowledge, the scale, the process we build to perfect that,” he says.

Flying airliners can be boring — the vast majority of flights go without a hitch. Pilots keep themselves ready for the worst through sessions in full flight simulators, 13-ton machines on telescoping legs that buck and roll through six degrees of freedom. In recurring training, typically two-day courses that airline pilots are required to take every six to nine months, they confront a gamut of rare disaster scenarios inside “the sweat box”: failure of engines on takeoff and landing, bird strikes, fires, sudden shifts in wind, midair near-collisions. They practice diagnosing and dealing with malfunctions as warning lights flash and bells and buzzers sound while the machine convincingly simulates the vertigo-inducing lurches and the view out the windshield that pilots see in the real cockpit. After a practice session or two, pilots step into the simulator with an examiner. If they fail and then fail again on a second try, depending on the airline it could lead to a demotion or put their job in jeopardy.

Given the high cost of flight simulators — $6 million to $15 million apiece —and to keep up with the demands of recurrent training, operators generally try to run the machines 16 to 20 hours a day, seven days a week, requiring many pilots to train on the night shift. CAE promises it can operate a training program more efficiently than an airline given its deep knowledge of its own equipment and its extensive training center network.

CAE won’t disclose numbers, but analysts estimate the company saves airlines 20% to 30% on training. Parent has built a client roster dominated by rapidly expanding Asian airlines and low-cost carriers like AirAsia, EasyJet and Ryanair. Those customers are happy to grow their pilot corps without sinking capital into buying simulators or constructing their own training facilities.

“It’s been a great working relationship,” says Adrian Jenkins, operations chief for AirAsia, which has grown into Asia’s largest budget airline since CAE first sold the upstart Malaysia-based carrier a used Boeing 737 simulator in 2004. In 2011 they established a joint venture to train AirAsia’s pilots as well as those of other local airlines; in 2017, Air Asia cashed out its 50% stake to CAE and signed a 20-year training contract.

“Having worked with CAE for years, we trusted them with our training,” says Jenkins, so AirAsia decided, “Let’s just focus on the airline business.”

Gaining that trust has been a hurdle for CAE. Many established airlines are hesitant to outsource training, seeing it as a mission-critical way to imprint their operating procedures and culture on pilots. “It’s still not very well accepted in North America and Europe,” says Fadi Chamoun, an analyst with BMO Capital Markets.

But analysts and Parent believe the company has gained critical mass in the past few years, inking 40 long-term training deals in 2018 alone and making inroads with some bigger-name airlines. CAE launched a rookie pilot training program with American in 2018 and established a joint venture with Singapore Airlines to establish a training center. Parent sees winning business from the widely admired airline as a big get. “I take huge pride in that,” he says.

The company was founded under the name Canadian Aviation Electronics in 1947 by Ken Patrick, a World War II wing commander in the Royal Canadian Air Force. Patrick started out installing radar systems in the Canadian Arctic Circle to detect Russian bombers, then in 1952 he won a contract to build a flight simulator for the CF-100 Canuck fighter jet.

In the 1980s, CAE made the first simulators deemed realistic enough by U.S. regulators to allow pilots to train on them exclusively. The result: The first time the vast majority of pilots get behind the controls of an airliner today, it’s as co-pilot on a plane loaded with passengers.

By the 1990s, CAE was riding high with a 67% share of the commercial simulator market, but the computer revolution in Silicon Valley was about to end the good times. The increasing power of commercial software and off-the-shelf graphics processors eroded CAE’s technology edge, and a steady rise in the value of the Canadian dollar starting in 2002 made its products more expensive than the competition, tipping the company into crisis. Enter Parent, which then-CEO Robert Brown poached from the Montreal-based industrial conglomerate Bombardier to find a fix.

Parent had built a strong track record as an aerospace engineer and manager at Bombardier, belying the prediction of a high school physics teacher who had told his father, an insurance company manager, and his mother, a bank teller, that he’d never amount to anything. Brown, who ran Bombardier Aerospace in the 1990s and was promoted to CEO of the whole company in 1998, says he had been impressed by Parent’s ambition and his ability to execute under pressure. Brown parachuted him into a series of aircraft factories in Toronto; Wichita, Kansas; Tucson, Arizona; and Northern Ireland to get the production lines humming. “When there was something that needed to be delivered, I could count on him,” Brown recalls.

At CAE, Brown put Parent to work in 2005 as head of the simulator division, where Parent slashed head count and production costs, putting the business back on its feet. But the experience crystalized for Parent that CAE had to diversify, a mission he has carried out with zeal since he succeeded Brown as CEO in 2009.

One hurdle Parent had to clear: a perception that CAE was still primarily a hardware company. CAE surveys showed more than half of airline CEOs didn’t even know the company trained pilots. Internally, Parent says, he realized the company was sending an outdated message to its employees. “If you looked at our vision [statement] at the time, you would see words like, ‘best modeling simulation company,’ ” he says.

In 2015, Parent restated it clearly: going forward, the company’s mission was simply training.

That led him to zero in on CAE’s curriculum and its staff of instructors, contractors who had been such an afterthought that Parent initially couldn’t get a ready answer to the question of how many the company had. He revamped instructor hiring, training and compensation. Last year CAE acquired a 45% stake in Pelesys, a Vancouver-based courseware development company it had been working with, and rolled out Rise, an artificial intelligence system that evaluates students’ performance in simulators, picking up on little details that instructors might miss.

CAE faces formidable competitors that see the same opportunity in training. Through acquisitions, the defense contractor L3 has cobbled together a civil simulator and training business that has the second-largest market share behind CAE, and Airbus and Boeing have expanded into pilot training as part of their push into higher-margin services. In the lucrative niche of business jet pilot training, CAE is going up against Flight Safety International, owned by Warren Buffett’s Berkshire Hathaway.

But analysts say there should be room for all to thrive in a growing market. Airbus and Boeing may dwarf 9,000-employee CAE, but their rivalry naturally limits them in training: Boeing isn’t about to teach pilots how to fly an Airbus A320.

CAE has followed the same playbook in growing its defense business, which accounts for 38% of sales. Like commercial airlines, militaries are increasingly willing to outsource training and to conduct more of it on simulators. Defense revenues have risen 26% since 2015 to 1.1 billion Canadian dollars ($845 million), and Parent believes that growth will remain strong amid a global upturn in military spending to counter a more belligerent Russia and China. Like its civil training business, CAE’s military training customers sign multiyear contracts, promising CAE a smoother ride through economic downturns.

Barring a global pandemic or other disaster that clobbers airlines, Parent is upbeat about CAE’s prospects in a travel market that’s expanding 3.5% to 4% a year: “We have no ceiling on how we grow.”

These Renowned Fashion Designers Have Turned Their Hands To Hotels