Lending A Hand: Liwwa Has Lent $25M To SMEs In Jordan. Now Ahmed Moor Has Egypt, Ethiopia And Turkey In Sight 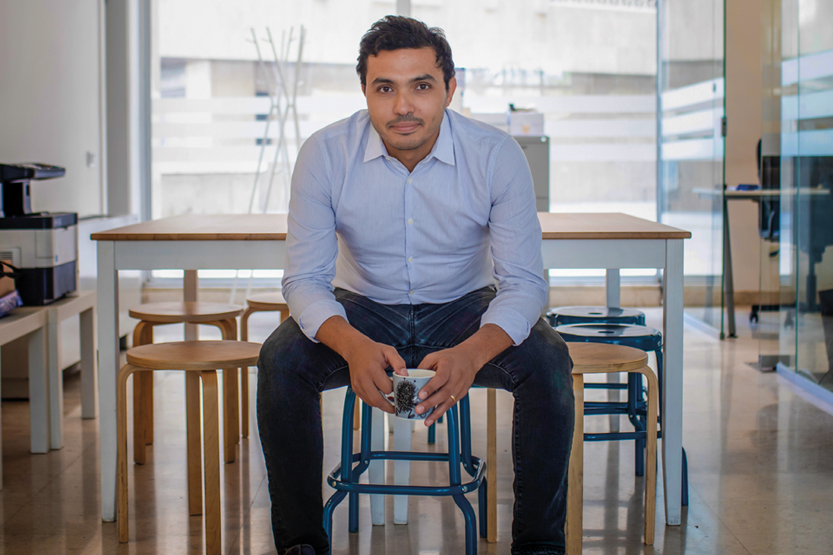 Ahmed Moor’s Liwwa has provided $25 million in debt to SMEs that struggle to procure bank finance. now he wants to replicate his success in Egypt while keeping Ethiopia and Turkey in his sights.

It’s early morning, and blaring horns from vehicles indicate that downtown Amman is coming alive. SME lending platform liwwa’s expansive offices in downtown Amman are also just waking up, with only two employees present. Slightly bleary-eyed and dressed casually in a round-necked t-shirt, liwwa’s co-founder and CEO Ahmed Moor seems to be mirroring the mood. But his demeanor takes a turn when the conversation turns towards his startup, a marketplace for debt that he started five years ago.

Moor, 35, has a reason to be excited. Liwwa has just expanded into Egypt, a new market where it is slowly testing its model of SME financing. There are enough challenges and dynamics to keep Moor and his team on their toes. For starters, it is a much bigger market than liwwa’s home base of Jordan. But Moor is optimistic. “Purchasing power is smaller but for our market segment, SMEs, we’ll find our niche,” he says without missing a beat.

It is not difficult to see why Egypt holds much promise for the six-year-old firm. To date, liwwa has disbursed $25 million in debt over 600 loans to 400 small businesses in Jordan—an outcome Moor is hoping to replicate in Egypt as well. In 2018, the firm lent $9 million, and it aims to lend up to $15 million this year, capitalizing on the region’s need for finance among smaller firms. Its performance has earned it credibility among a class of investors, helping it bag $5.6 million in funding and $17 million in debt funding so far. Moor says he is all set to close another substantial amount of funding worth a few more millions this year, but he’s keen to keep details of that quiet for now. Meanwhile, the platform had 300 active investors in 2018.

Its appeal to investors is partly due to liwwa’s ability to break into the nascent alternative finance industry in MENA. Platforms such as these that specialize in facilitating finance are growing in prominence in a region that has historically struggled to close the financing gap among SMEs, which are often saddled with prohibitive bank fees and cumbersome procedures. Research cited by IMF shows that while SMEs in MENA represent 96% of registered companies and about half of employment, the bank lending to the segment hovers at just 7%—one of the lowest in the world.

It is this very lack of finance that liwwa has tapped into in Jordan. The company acts as a marketplace for debt where small businesses in need of money can approach the platform, which also hosts retail and institutional investors willing to lend. Applicants are required to upload their details, such as their trade license, bank statements, and the amount the business needs online or through a sales officer or a broker. Following a cashflow assessment of the business which needs a loan, liwwa’s team will then issue a credit score to the applicant, which is then used to determine whether a loan gets sanctioned or rejected. Liwwa will then proceed to lend the agreed amount (the maximum amount a business can borrow is capped at $100,000) to the applicant from its balance sheet. It earns money from the spread it pays lenders and what it charges borrowers. The startup then sells about 20% of each loan it underwrites into its online retail marketplace, freeing its balance sheet for more debt underwriting. “The whole idea is about the broader fintech ecosystem. We bring the borrower, we retain the borrower and we think about how can we serve them better,” says Moor.

Despite any limitations, businesses can get cash in a short time—a factor that is vital to their survival. It also helps that such a platform bypasses the usual long-drawn-out procedures at a conventional lender. “The most important difference is the need of the collateral,” says Susanne Baalbaki, an entrepreneur who has received a loan from the startup. “Liwwa doesn’t need collateral. The signatures of the owners are enough.” Baalbaki and her sisters first approached liwwa when they wanted funds to source products for their home decoration business from handicraftsmen and individual female artisans—a section not formally recognized by the Ministry of Industry and Trade in Jordan. This made it difficult for them to get a bank loan as the lenders did not classify them as legal manufacturers. But with liwwa, the sisters were able to receive immediate cash and more importantly, in Baalbaki’s words, there were “no hidden extras that are debited from your account.”

The finance needs of thousands of businesses like Baalbakis’ indicate that the region is yet to unlock the potential in peer-to-peer lending. Nameer Khan, founder of the MENA Fintech Association, says there is a $240 billion gap in SME financing that such platforms can capitalize on. “They can tap such markets and raise finance or generate capital with different forms of instruments. Such P2P markets also offer alternative channels, and ticket size of the transaction is also not of many constraints.”

Moor is hoping that liwwa can successfully tap into Egypt’s need for finance despite the differences in market dynamics. He is also looking at ways to increase synergy in operations between two markets by expanding liwwa’s services. “All we do is give the loan, but now we are also looking to do free transfers between the countries,” explains Moor.

If liwwa’s expansion is successful, the entrepreneur says he is looking to cast his sights further. The next markets on his radar are Ethiopia and Turkey—both of which fit neatly into liwwa’s focus area: the emerging markets category. While he sees potential in the U.A.E. and Saudi Arabia, these markets are not his immediate focus. “The U.A.E. and Saudi Arabia are a little bit different in underwriting models,” notes Moor. But like a true entrepreneur, he does not rule out liwwa’s operations in these much mature markets. “I hope we can extend our services there eventually, especially with the money transfers.”

Moor’s leaning to emerging markets can be partially due to his first-hand experience in these markets. Born in Gaza, Palestine, he moved across Sierra Leone, Haiti, Nepal and finally the U.S. during his childhood because of his father’s job at an international development agency. “I grew up in an environment where poverty was the standard, where most people found themselves living in it. That impacted me deeply.”

Eventually settling in the U.S., Moor attended the University of Pennsylvania and joined a bank in New York upon graduation. However, after being laid off due to the recession that swiped off jobs in the global banking hubs, Moor decided to take a break and traveled to South East Asia and Lebanon. While there, he started blogging articles that media outlets such as Al Jazeera and The Guardian later picked up. With his blogging moderately successful, Moor decided to try his hand in journalism and started writing for a few outlets based out of the U.A.E., Saudi, and Lebanon. His time as a journalist coincided with some of the Middle East’s most historic moments. The region was in the throes of the Arab Spring, grabbing global headlines.

As a freelancer, young Moor covered the protests in Egypt in 2011. It further inspired him to work on a venture that would help small businesses. “It was important for me to work on something that helped improve outcomes for customers.” He returned to the U.S. and enrolled in Harvard Kennedy School for a master’s in public policy. While there, he met Chris Larsen— the founder of peer-to-peer lending platform Prosper Marketplace. Wanting to work on something similar, he returned to the region to begin liwwa along with business partner Samer Atiani, who also acted as the CTO of the company. Atiani is not currently involved with the company due to personal reasons.

Initially, liwwa struggled to find funding for a year because of its complex operating structure. “It is not easy for investors to understand,” allows Moor. At that time, fintech was at its infancy in the region. However, he got a break when introduced to the serial investor and founder of Aramex International, Fadi Ghandour, who gave them some space in a co-working area in a building he owned in Amman to start their operations. Subsequent networking among venture capitalists brought them into contact with Omar J. Sati of investment firm Dash Ventures. After listening to Moor and Atiani’s idea, Sati agreed to take a shot at liwwa, pumping in $200,000. Soon after, Bank Al Etihad invested another $200,000 into liwwa while Ghandour contributed $100,000, bringing the total up to $500,000.

For Sati, investing in a startup aiming to address the massive financing challenge was a significant opportunity. But liwwa was disrupting a sector that was traditionally highly regulated. “Back in 2014, when we invested, many investors across the region didn’t understand fintech or avoided it due to the high regulatory barriers. But because my partners and I are ex-bankers with domain expertise as well as vast sectoral networks in the region, we were confident that we would be able to manage, mitigate and address this risk over time.”

Moor has now moved on from pitching to generalist VC firms to investors that invest specifically in fintech sectors. He has been successful too. The company received a round of funding from FMO, a public-private investment firm supervised by Dutch Central Bank, while also counting Silicon Badia and MENA Venture Investments among its investors. Moor is now receiving interest from investors looking to park their funds in the sub-continent, Sub-Saharan Africa and even Latin America. Liwwa is not profitable at the moment, but that is because Moor is continuing to reinvest heavily into operations, credit, and capital structure technology. “Liwwa is very profitable from a unit economics perspective, however,” he quips.

Now that he has captured Jordan, Moor is all prepared to tackle Egypt, where he sees massive potential for disrupting SME finance. The entrepreneur already has a partner on board in the new market where he is planning to spend some of his time in the coming weeks. “If we were building a food delivery business, I wouldn’t do it here, it’s not a good market, but for financial services, these are multimillion-dollar markets,” he enthuses.

The Rise Of “Phy-Gital Banking”

How Banks Can Drive The Re-Birth Of Banking