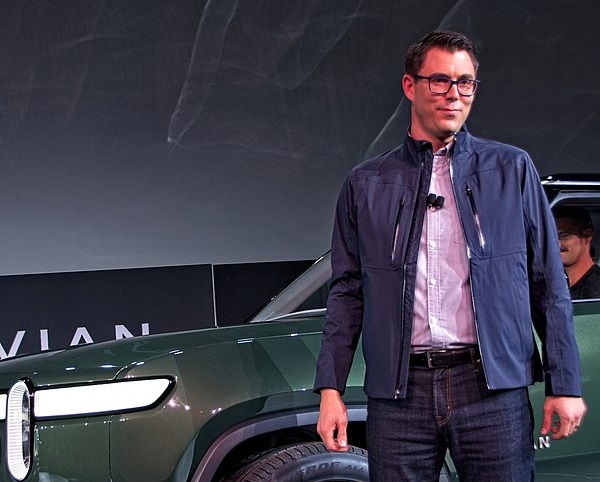 Rivian, an innovative truck startup planning to produce all-electric pickups and SUVs that’s backed by Ford Motor Co. and Amazon, said Cox Automotive is investing $350 million and may partner with it on future business operations.

Led by 36-year-old founder and CEO RJ Scaringe, Plymouth, Michigan-based Rivian has ginned up excitement in the auto industry with its plans to launch a line of long-range, rechargeable light trucks, including the R1T pickup and R1S SUV, built off a highly functional “skateboard” platform that integrates the battery pack, drive components and suspension system. Ford invested $500 million in April and Amazon led a $700 million round in February.

“We are building a Rivian ownership experience that matches the care and consideration that go into our vehicles,” Scaringe said in a statement. “Cox Automotive’s global footprint, service and logistics capabilities and retail technology platform make them a great partner for us.”

A Clark Kent look-alike with a Ph.D. in mechanical engineering from MIT, Scaringe has refined his ideas for electric vehicles over the past decade and could prove to be a major competitor to Tesla’s Elon Musk, who has his own plans for battery-powered trucks, ranging from a pickup to 18-wheel semis.

Rivian aims to begin production and sales of its first two models from late 2020, building them at the former Mitsubishi Motors Corp. assembly plant in Normal, Illinois, that it purchased in 2017 and is renovating. The company already has more than 1,000 employees and wants to begin selling its electric vehicles internationally from 2021.

Rivian’s fundraising in the past year has been prodigious and totals at least $2 billion with Cox’s investment. Still, it declined to provide an estimate valuation or confirm what stake is owned by Scaringe. In addition to the funding from Ford and Amazon, it raised $450 million in an earlier round that included Saudi Arabia-based investment group Abdul Latif Jameel, Su­mi­tomo Corp. of Japan and London’s Standard Chartered Bank.

“We are excited by Rivian’s unique approach to building an electrified future and to be part of the positive impact its products will bring to our roads and the world around us,” said Sandy Schwartz, president of Cox Automotive. “This investment complements Cox Automotive’s own commitment to environmental change through our Cox Conserves efforts.”

Along with its equity stake and potential business operations, Cox Automotive will have a seat on Rivian’s board.