Satisfied With Your Lot? 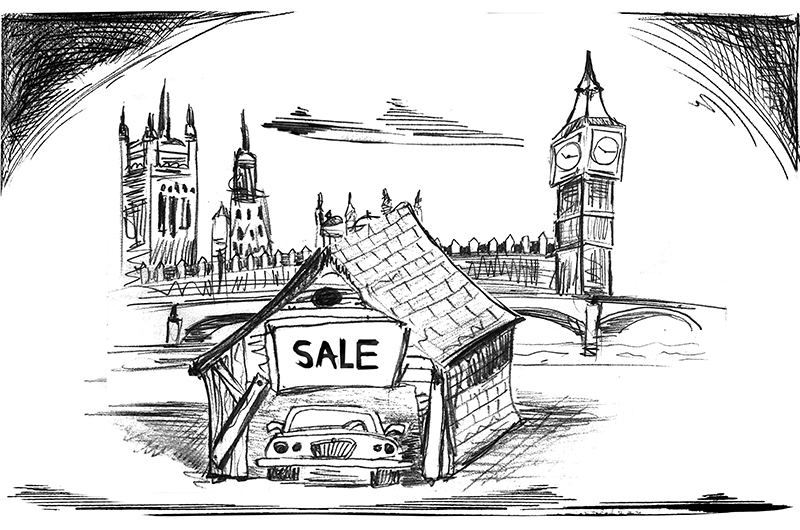 It’s a sad state of affairs when the most £100,000 ($160,800) will get you in London these days is a tired, worn-out garage, but when that same parking spot fetches triple that, sadness borders on insanity.

In February 2014, an underground space near London’s Royal Albert Hall in Kensington, went on sale for £400,000 ($643,500). Granted it fits two cars, but the comparisons are staggering. The same sum would bag two family homes based on the average UK house price, 15 years of an average UK salary, or how about 107.4 years of parking tickets at Imperial College London—a popular parking venue for Royal Albert Hall visitors?

Head to London’s swanky Knightsbridge or Mayfair and you’ll find that the concert hall’s top spot isn’t alone, as Neil Duffy, a partner at real estate company Cluttons, explains. “There have been garages in that neighborhood that have sold for significant sums, north of £300,000 or £400,000—half a million in some instances. It’s the rarity factor and also the value that the parking space or garage might add to a house.”

For streets with no on-road parking, competition, and thus, prices, can soar. “There may be historically one garage space that’s been there for many years, and when it comes to the market, the buyers that are directly adjacent will often fight quite fiercely. It’s invariably those stories that hit the press,” says Duffy.

But as outrageous as London’s prime parking prices might sound, appetite is there. For the Cluttons UK partner, it all boils down to supply and demand. “Parking spaces and garages in London is a niche market, but relatively active…it very much depends on what it is and where it is.” According to Duffy, spaces in prime central London can range anywhere from £100,000 at the “lower end” to £350,000 ($563,000) for coveted spots at locations such as One Hyde Park, where a one-bed flat goes for no less than £4 million ($6.4 million) and a penthouse can set you back north of £100 million ($160.9 million).

“If you look at the buyer profile for that kind of flat, even a one bedroom flat, invariably they’ll have a car—if not a luxury car—and when you compare the value of £300,000 for a parking space against £4 million plus, actually, it’s relative,” says the realty expert. Indeed, for a number of well-heeled drivers, the equation balances. Cluttons’ last parking space sale—albeit three years ago—fetched £240,000 ($386,000). The lucrative space is located on Basil Street, directly opposite renowned department store Harrods, where an adjacent spot was let in May last year for a weekly sum of £134 ($215).

The investment potential, however, is less overwhelming. Divided into the price of the Basil Street sale, the £134-a-week parking space yields just 2.9%, compared to an average of 3.5% for residential accommodation. “If you look back at other sales within that car park over time, there was one space that sold in June 2010 for £188,000 and a similar space sold two years later for £200,000. So that’s a bit of growth, but not significant,” adds Duffy.

On the bright side, at least the maintenance costs are minimal. “In some central London blocks you may pay a nominal service charge but it’s likely to be quite low, so your gross yield will effectively equate to your net yield,” he says. “I suspect, if you compare that to a residential flat or house in London you might be looking at a deduction in the region of 20% from gross to net.”

But for Mark Clegg, Cluttons’ UK ‎Head of Residential Investment, low maintenance isn’t enough to justify parking your cash on a car-size slab of concrete. “In terms of investment, I think you would be better putting your money in something else,” he asserts, adding that by comparison, residential values between 2010 and 2012, saw 30%-plus capital value appreciation.

“The returns you would get vary from around 2% to 4% growth on a car parking space and realistically, the value of it is not going to increase significantly over time,” he adds. Clegg suggests instead, that those with £100,000 to invest should look beyond London’s Zone One perimeters, to up-and-coming areas with growth potential—areas that are largely overlooked by the Middle Eastern audience.

“The problem is, many Middle Eastern investors tend not to like going out of central London because they don’t really know it that well,” says the firm’s international research and business development manager, Faisal Durrani. “It’s that familiarity—although there seems to be interest in the East at the moment, towards Wapping and the Docklands, because it’s the sort of product they’re familiar with, the new build schemes they have in their own home markets.”

At all points of London’s property compass prices are rocketing. But in the parking stakes, the English capital has a competitor: New York City. According to Clegg, $150,000 is the going rate for a space at 50 United Nations Plaza but recently, the Big Apple’s parking meter blew its top.

In September last year, parking spaces at 42 Crosby Street, a new luxury development in New York City’s SoHo neighborhood, went on sale for a staggering $1 million each. And to add insult the financial injury, the spaces are only available on 99-year leases. A private garage on 66 East 11th Street was also listed for $1 million last year, while a space at 60 Collister Street in TriBeCa sold for a now seemingly-economical $345,459.

Then there’s Hong Kong. The most expensive parking space ever sold in the territory of seven million inhabitants went for around $547,000 in May 2014 in a residential complex on Hong Kong Island. As in London and New York, most Hong Kong residences don’t come with parking, resulting, according to the Transport Department, in a total of 683,000 parking spaces—198,000 for the public and 485,000 designated for private use.

Hong Kong, Mayfair, Manhattan: as parking demand exceeds supply in some of the world’s most densely populated and desirable areas, prices are likely to keep on rising, but as they do, those seeking a sound investment should probably steer their luxurious wheels well clear. For everyone else: buy a bicycle.