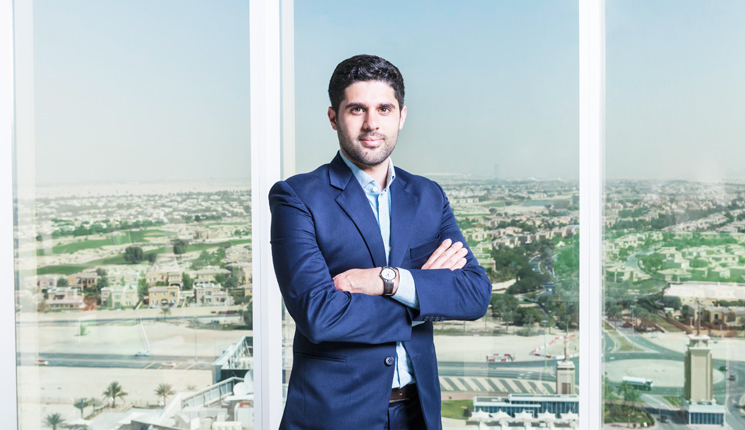 Online food ordering is nothing new, but Beschir Hussain believes there’s still room in a market with appetite

Beschir Hussain is hungry. In two short years, the 28-year-old CEO and co-founder of Hellofood Middle East has rolled out his online food ordering platform across the region, starting with a market revered as MENA’s toughest nut to crack: Saudi Arabia. Now, with operations in Jordan, Lebanon and Qatar also underway and revenues that he claims are growing 30% month-on-month, the German with Iraqi roots is satisfying a region’s appetite—and fast.

His recipe is simple. Using the Hellofood app or company website, customers select a location and choose from a list of participating restaurants that deliver to their area. Next, they place an order online, with the option to pay via the web, or by cash on arrival. With the promise of delivery within one hour, hungry customers then sit back and wait for their food to arrive—hot and on time.

The concept is nothing new. Just Eat and Delivery Hero have been gaining traction on Europe’s online food ordering scene; Seamless and GrubHub in the US recently merged and filed an IPO; and Turkey’s Yemeksepeti reportedly handles more than 100,000 orders per day. Meanwhile, Hellofood itself is part of the Foodpanda Group, which has operated under the Foodpanda name in Asia and Europe since 2012.

Names aside, though Hellofood may not be reinventing the wheel, with 80 employees and operations growing from the Gulf to the Levant, it is proving there’s room for one more. And the company which launched with $8 million in capital generated from Jordan-based iMENA Ventures and Saudi’s Mobily Ventures, also has aptly-named Rocket Internet to thank, in part, for its rapid rise.

The Germany-based internet platform, now valued at $8.4 billion, has been tailoring proven internet business models to the needs of untapped markets for eight years now, and has catapulted Hellofood into the ranks of a long list of ecommerce success stories it has helped get off the ground—fashion retailer Namshi and online car dealership Carmudi counting as just two.

In partnership with iMENA Group, a regional group of online consumer businesses, Rocket Internet has served as both investor and mentor in Hussain’s venture, with one of its employees also counting as a fellow co-founder. “At the end of the day the operations were scaled very fast and that's why a lot of people are involved in the beginning, to create the products, to adjust them to the local needs,” says the young entrepreneur, whose parents migrated to Germany from Iraq before he was born.

The joint effort is for good reason. “Hellofood Middle East is at the forefront of one of our most attractive markets,” says Eyad Al Kassar, CEO of Rocket Internet Middle East. “The strength of their leadership has built a dynamic and innovative team capable of leading the tremendous online change currently underway in the region.”

And Hellofood is riding the wave, with two recent acquisitions tightening its regional grip. Through Foodpanda Group, the company acquired UAE online delivery platform, 24h.ae for an undisclosed sum, while in the same month, Rocket Internet’s Global Online Takeaway Group acquired food ordering enterprise, Talabat.com, for $170 million. In potent combination, the two deals have added, almost overnight, to Hellofood’s reach across the GCC.

But despite geographical expansion, the UAE and Saudi remain central to Hussain’s plans, and his focus is unsurprising: according to Euromonitor International, both countries boast strong appetites for culinary convenience. The market intelligence firm valued the UAE’s takeaway and home delivery market at $158.5 million in 2014, rising to an estimated $168.2 million this year. Meanwhile, in Saudi Arabia, the same values are estimated at $107.6 million and $112.8 million.

It’s in the latter market that Hussain—himself a former Rocket Internet employee—is keen to grow, though he admits that operating in the Kingdom is about as challenging as it gets. “For whatever you can think of, it's the toughest!” he laughs.

Challenging it may be, but the Saudi market is also hard to resist. “Consumers are expected to become increasingly receptive to 100% home delivery/takeaway during the forecast period 2015-2019,” explains Euromonitor research analyst, Natalia Gorzawski, adding that the market is expected to grow at 4.8% this year. “The channel can also appeal to some consumers due to religious law in Saudi Arabia, with women being segregated in public and some families thus preferring to eat at home as a result,” says the analyst. And as the appeal grows, Hussain, who also founded a nonprofit that promotes gifted students in Germany, is ready to seize the opportunity.

With Hellofood already leading the Saudi market according to its co-founder-CEO, venturing into complimentary services is the next step. For Hussain, that means delivery. Many restaurant chains simply don’t offer it; a reality which previously prevented Hellofood, whose core business is connecting restaurants that have delivery operations with hungry customers, from working with them. In response, he opted to launch his own delivery operations, starting with 10 drivers on the ground in Jeddah and plans to expand into Riyadh.

“The interesting part is once you start [delivering], no other competitor can work with the same restaurant,” says the entrepreneur who studied economics and philosophy in the US. Participating restaurants don’t pay to list with Hellofood—restaurants simply pay commission for successful orders—but a signed contract prevents them from enlisting delivery services from elsewhere.

It’s simple in theory, but the practice is an altogether more complicated affair. The food ordering business is quiet at certain times of day, while at peak times, capacity can be strained. For restaurants that offer their own delivery, the latter can create a dilemma, and for Hellofood, a problem. “As a restaurant, you will have to decide whether to deliver your own orders, or those coming from another platform. But, if we're charging them for each successful transaction, they would rather go with their own,” explains Hussain.

The entrepreneur has learned from experience; in the early days, restaurants would claim to be too busy and would cancel orders from Hellofood. Hussain’s answer was to incentivize, offering to revoke commission charges for orders taken during peak times. But today, incentives are being met in equal proportion by leverage, as the Hellofood name gains popularity. “When you have a significant number of orders, you have much higher negotiation power,” says the co-founder. He speaks with confidence, yet shrugs off suggestions that he’s achieved a lot for his age, stating simply that “there are younger people.”

Even with youth and bargaining power in his favor, challenges abound. As the only face a Hellofood customer encounters, the driver is both the most important person and the source of most angst for Hussain. With the company’s own delivery operations, he can breathe easier: his drivers go through rigorous training and are kitted out with the latest technology. But where he relies on restaurant drivers, it can be a different story—many equipped with neither the language skills, nor the area knowledge required in a country where addresses are largely absent.

“[People] say, ‘You know that street? Take a right and there's a pharmacy, then take left’,” laughs Hussain. He jokes, but the task is anything but, and if a driver is lost, he will pick up the phone and call the customer—a move nothing short of disaster. After all, the business is about avoiding the call.

And just as developing a skilled force of drivers is a work in progress, so too is developing customer trust and awareness. More than once, Hussain has been asked about the location of his ‘restaurant’, while some customers test to see if the service is genuine. “Sometimes we get orders from people who just want to see if it's real!” he smiles.

Gaining the trust of outlets, however, appears to be getting easier, with supermarkets seeking a piece of the Hellofood pie, too. In response, Hussain has just started grocery delivery in Amman. Launching just weeks ago, it’s still early days, but according to the CEO, in a country of 1.2 million households, with an average of 5.3 people in each, the results so far are compelling.

“When people buy, they have very high baskets—more than 25 euro—and there's no other platform on the Internet where you can visually shop,” he explains. The next stop is Saudi Arabia; a country where women cannot drive, and thus, a land of opportunity for online ordering.

But while Hellofood is blazing a trail on the online scene, Hussain points to the trusty telephone as his biggest adversary. Old habits die hard and even as they start to shift, other players are emerging on the scene, vying for attention. Despite the acquisitions, Hellofood is not yet operating under its own name in the UAE, which means its rival, foodonclick, is leading the way in the Emirates—and operating in many of Hellofood’s other markets, too. Meanwhile, restaurant review site, Zomato, also recently announced its entrance into the online ordering space.

But, with focus fixed on his Saudi stronghold and the weight of two acquisitions behind him, Hussain isn’t fazed, and the year is still young. “Going forward we will start to invest more into the region and we are considering growing through further acquisitions—whatever it takes to be the number one leader,”  he states.

True to form, Rocket Internet is helping it get there, and fast. But while buoyed by the multi-billion-dollar accelerator, Hussain has his own entrepreneurial advice: have a solid business idea—“something you can express in half a sentence”—and take the leap, “though not blindly” he stresses. With his own eyes wide open, Beschir Hussain is continuing his campaign to tickle taste buds, in world where appetite for tech startups is insatiable.